Democrats have a choice, but it’s not Bibi versus Barack

Democrats have a choice, but it’s not Bibi versus Barack

It’s Barack versus the best interests of the American people. 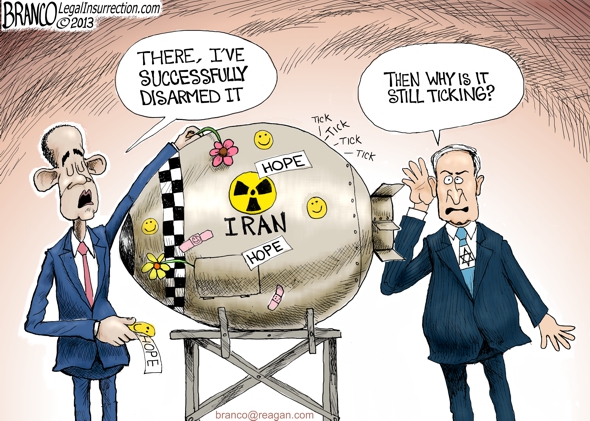 It all is proceeding as planned.

A nuke deal with Iran, with the quid pro quo of assisting Iran’s expansion into a regional power, is working its way forward. For that, Iran gets to keep most of its nuclear program, because it likes it.

There are two things standing in the way: (1) Congress, and (2) Bibi Netanyahu’s persuasive powers.

The Obama administration needs to get rid of both, and it has seized on the opportunity of John Boehner’s invitation to Netanyahu to speak before Congress as the tool to accomplish that mission.

The false narrative spread by Obama’s operatives has the goal of pulling Democrats away from opposing a nuke deal and attending Netanyahu’s speech, by forcing a false choice of Obama or Netanyahu. The third choice — what is best for America in keeping nukes out of the hands of a regime that still calls us the Great Satan and chants Death unto U.S. — is not on the table.

Obama puts his own cult of personality before anything. I don’t believe that he’s sincerely offended; he’s just not going to let a manufactured crisis go to waste.

Interesting thing is, the Editorial Board of The Washington Post pretty much shares Netanyahu’s concerns about an impending bad deal, and stands against Obama’s attempt to shut Congress out of the process, The emerging Iran nuclear deal raises major concerns:

AS THE Obama administration pushes to complete a nuclear accord with Iran, numerous members of Congress, former secretaries of state and officials of allied governments are expressing concern about the contours of the emerging deal. Though we have long supported negotiations with Iran as well as the interim agreement the United States and its allies struck with Tehran, we share several of those concerns and believe they deserve more debate now — before negotiators present the world with a fait accompli.

The problems raised by authorities ranging from Henry Kissinger, the country’s most senior former secretary of state, to Sen. Timothy M. Kaine, Virginia’s junior Democratic senator, can be summed up in three points:

●First, a process that began with the goal of eliminating Iran’s potential to produce nuclear weapons has evolved into a plan to tolerate and restrict that capability.

●Second, in the course of the negotiations, the Obama administration has declined to counter increasingly aggressive efforts by Iran to extend its influence across the Middle East and seems ready to concede Tehran a place as a regional power at the expense of Israel and other U.S. allies.

●Finally, the Obama administration is signaling that it will seek to implement any deal it strikes with Iran — including the suspension of sanctions that were originally imposed by Congress — without seeking a vote by either chamber. Instead, an accord that would have far-reaching implications for nuclear proliferation and U.S. national security would be imposed unilaterally by a president with less than two years left in his term.

That first point is critical. The goal posts have been moved, in the Iranian’s favor.

Based on the details that are known, Obama and Kerry are so desperate for a deal, they essentially have blessed Iran’s status as a nuclear and regional power.

Brett Stephens at The Wall Street Journal argues that appearing before Congress to talk about the Iran nuke deal is A Speech Netanyahu Must Give:

… Relations between Israel and the U.S. have been in crisis nearly from the moment President Obama stepped into office. Democratic support for Israel has been eroding for decades. It was the U.S. president, not the Israeli prime minister, who picked this fight….

The president is also demanding that Democrats rally around him in his histrionic fit over the Netanyahu speech. This is from the same administration that, as Politico’s David Rogers reminds us, never bothered to consult Mr. Boehner on its invitation to South Korean President Lee Myung-bak to address Congress in 2011.

This history is worth recalling because it underscores the unpleasant truth about America in the age of Obama. The president collects hard favors from allies and repays them with neglect and derision. He is eager to accommodate the political needs of authoritarian leaders like Iran’s Hasan Rouhani but has no use for the political needs of elected leaders like Mr. Netanyahu…

This is the mentality of a peevish and callow potentate. Not the least of the reasons Mr. Netanyahu must not give in to pressure to cancel his speech is that he could expect to get nothing out of it from the administration, while humiliating Mr. Boehner in the bargain.

Mr. Netanyahu also needs to speak because Congress deserves an unvarnished account of the choice to which Mr. Obama proposes to put Israel: either accede to continued diplomacy with Iran, and therefore its de facto nuclearization; or strike Iran militarily in defiance of the U.S. and Mr. Obama’s concordat with Tehran….

Above all, Mr. Netanyahu needs to speak because Israel cannot expect indefinite support from the U.S. if it acts like a fretful and obedient client to a cavalier American patron. The margin of Israel’s security is measured not by anyone’s love but by the respect of friends and enemies alike. By giving this speech, Mr. Netanyahu is demanding that respect. Irritating the president is a small price to pay for doing so.

Some Democrats, like John Lewis, are boycotting a Netanyahu appearance because they perceive an insult to Obama.

Seriously, Iran is about to go nuke, as it develops nuclear capable missiles and intercontinental ballistic missiles, and John Lewis, Nancy Pelosi and other Democrats are worried about Obama’s alleged hurt feelings and pride?

Democrats have a choice, but it’s not Bibi versus Barack. It’s Barack versus the best interests of the American people

“It’s Barack versus the best interests of the American people.”

And it has been for the last six years, but the Deemocrat/Collective has knee-jerked in the direction of Barracula over the American people and the national interest at pretty much every turn.

What always puzzles me is that American Jews are part of that herd, and seem impervious to all the evidence that the Collective HATES Israel, and Barracula heads the Collective.

“What always puzzles me is that American Jews are part of that herd.”

Your statement is off-base. A recent Gallup poll showed that nine out of ten American Jews expressed sympathy for Israelis; only 2% for Palestinians.

Any why wouldn’t there be diversity of opinion among American Jews? Are American Catholics 100% in favor of the Vatican?

Cat, you need to learn to read and reason.

The point I DID raise is about American Jews supporting Pres. ScamWOW in light of his APPARENT animus for Israel. Well, and Jews generally.

Recounting the actual situation versus the pea soup of various media spin jobs is critical and this article does it. I hope it gets linked everywhere.

Global warming is the penultimate ‘concern’ of this administration.

That being the case, the supposedly ‘settled science” of apocalyptic ‘manmade’ global warming-“the greatest crisis of our day”- and the enabling of the creation of Iran’s nuclear armament for the purposes of manmade nuclear warfare can be thought of as morally equivalent and therefore should be a no-brainer “No” vote for President High-Horse.

Of course it is. Obama plans to use the AGW horse to total control of the levers of energy and production.

He shall have Power, by and with the Advice and Consent of the Senate, to make Treaties, provided two thirds of the Senators present concur;

I guess the President is no longer constrained by the second part of that sentence.

I remember when the Left claimed Bush was “shredding the Constitution”. Their example was the government monitoring overseas phone calls to suspected terrorists. But now the Left is completely silent on Obama collecting data on nearly all calls. And completely silent on Obama ignoring the Senate over a treaty, a treaty that he won’t provide details on, and is suspected to give our enemies everything they want.

And God protect Israel, because they are likely Iran’s first target.

If God wanted to protect Israel or any other people or nation, he’d simply evaporate the bombs in flight, right?

And unless Iran want’s to martyr its entire nation and see the country flattened to radioactive debris, they’d never preemptively target Israel, which has an underground nuclear arsenal estimated at 80 to 100 warheads — a quarter of them probably aimed at Iran right now.

The only way to prevent Iran from going nuclear is to invade and occupy it, as we did with Japan at the end of WWII. Israel bombing selected nuke sites will only delay the process — but not deter them from arming themselves with nukes. A treaty isn’t going to stop them. Sanctions won’t stop them either. The only solution is war: “Hands Up, Don’t Nuke.”

We nuked and occupied Japan. Hmmm….

It’s sad that some people still can’t figure it out. Radical Islam tells us exactly what they intend to do. And there are still those who bury their head in the sand and pretend the Islamists think like civilized people.

“If a day comes when the world of Islam is duly equipped with the arms Israel has in possession, the strategy of colonialism would face a stalemate because application of an atomic bomb would not leave any thing in Israel but the same thing would just produce damages in the Muslim world”, Ayatollah Ali Akbar Hashemi-Rafsanjani told the crowd at the traditional Friday prayers in Tehran.