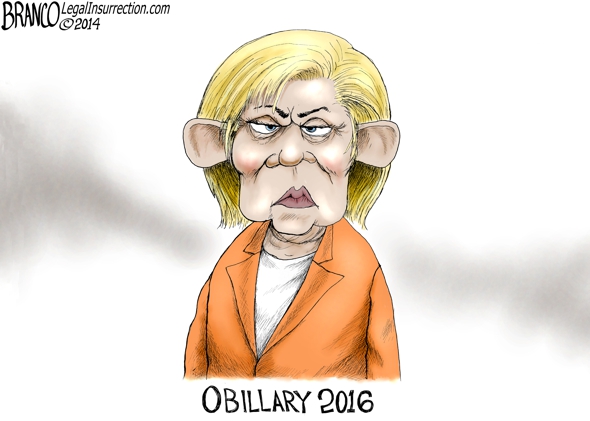 The 2016 race is already barreling forward on the right, with candidates from every point on the conservative-libertarian political spectrum throwing elbows and pressing forward to gain the attention of both the media, and primary voters in key states like Iowa and New Hampshire. Space in the spotlight is at a premium—the media is still trying to figure out how they’re going to differentiate and play these characters against each other.

For Democrats, though, the eventual race for the White House is on hold as top strategists attempt to answer a question that many activists on the left refuse to stop asking: where’s Hillary?

It’s odd to ask this question about a woman who hasn’t left the spotlight since her husband entered the Oval Office. For many on the left, she’s The Idea Whose Time Has Come©. For Conservatives, she’s the Long National Nightmare© that refuses to go away.

For strategists and campaign hacks, she’s a precious commodity—that they have no idea how to handle.

Via CNN, a few days ago:

Some Clinton loyalists worry that as the increasingly crowded Republican race heats up, the attacks on her could begin to stick without an apparatus in place to answer them.

The liberal superPAC American Bridge has been countering Republican attacks on Clinton’s behalf but many Democrats think it’s no substitute for a campaign messaging operation.

“They’re doing terrific research,” said one, “but they don’t know what her specific policy agenda is going to be. She should get in and start putting together a substantive policy agenda so the attacks that are going to begin to come from every single Republican who is jumping in to the race can be answered.”

The Democratic National Committee is beginning to take on a larger role in an effort to protect Clinton and the party brand but many Democrats are concerned even that won’t be enough.

Other supporters want Clinton to lay low as the Republican field heats up, convinced Clinton will avoid some fire if she’s undeclared and GOP candidates will take aim at each other instead.

The article goes on to describe how Dem strategists believe that the Iowa Freedom Summit, where Wisconsin Governor Scott Walker earned the right to call himself the conservative flavor of the week, offered Democrats the opportunity to sit back while potential Republican candidates destroyed each other.

Destruction? Not so much. Walker soared, Palin bombed, and the only thing Republicans fought about was whether or not other Republicans should be allowed to consider Palin as a contender. Spoiler: she’s not—and never was—a contender, so the “fight” was really a dialogue non-starter that has already fizzled.

Meanwhile, Democrats have unwittingly released a slow trickle of anxiety over Clinton’s formidable influence on an already delicate pre-primary situation. Instead of being able to pat themselves on the back for advancing gender equality, they’re having to navigate the problems associated with having to balance a potentially problematic candidate with the need to maintain a politically correct optic:

But that’s a problem for Democrats. True, they have successfully promoted the candidacies of women, championed issues that appealed to women, and generally been rewarded with their support. But the very elevation of these extraordinary women has placed male Democrats in the position of being unwilling to challenge them. The mantra “it’s her turn” has broad appeal among Democrats.

But wasn’t Sen. Barack Obama successful in defeating Clinton for the nomination in 2008? Yes, but he also represented a core Democratic constituency that also enjoys favored status in the party and rewards it in return with overwhelming support.

The advancement and championing of women has been a source of justifiable pride for Democrats since they put Geraldine Ferraro on the ticket as a vice presidential candidate in 1984. But their very success raises the question of whether it has saddled them with the burdens of political deference to women in leadership positions.

It’s not just the men that are being affected by this. Elizabeth Warren, far-left icon and reluctant 2016 boogeyman (boogeywoman, sorry,) is still sitting on the fence, and presenting a problem for both Clinton and her pro-female candidate supporters.

Speaking of Clinton, as someone put it: “Hillary and her campaign are a large balloon floating around in search of a pin.”

That pin will be Warren, who in 2016 will be 67 years old. It is now-or-never time for her to run. If she defers, as she now claims to be doing, it is unlikely she gets another shot at the White House. Her moment — and the stars — align now for her to puncture that Clinton balloon with precisely the issue that Warren understands: Hillary and Bill Clinton have sold their money-grubbing souls to Wall Street. The left wing of the Democratic Party — those who attend the Iowa caucus and vote in snowy New Hampshire in February — will choose Warren over Hillary Clinton.

For so many years, Hillary Clinton has been THE woman in the progressive political sphere, and for good reason. She made it through a mortifying tenure as First Lady to pull off a breakout career in American politics.

Having to factor another (more liberal) woman into the mix has got to be terrifying for her strategists.

Clinton’s biggest problem now isn’t Warren, or the men in her party, or a horde of hostile Republicans; it’s the simple fact that her campaign has started without her. She may not have an official infrastructure in place, but the fact that she isn’t in the race speaks volumes about her potential as a candidate and more importantly, her potential to play to (coddle?) a sensitive, feelings-over-thoughts demographic.

One thing that conservatives have learned is that raw strategy doesn’t translate into something the average voter understands. The Clinton camp’s decision to hold off until they get their own house in order may be strategically wise (considering they’re eating each other over that very decision,) but the optics are suffering. This is something that will hurt Clinton in the long run, because it’s one more bad optic that Republican front runners will be able to exploit.

Every two years since 2010 conservative candidates have increased their wins over moderate Republicans and over Democrats, of course, growing their caucus in both the US House and US Senate, and doing even better on statewide races across the nation. But no…. “One thing that conservatives have learned is that raw strategy doesn’t translate into something the average voter understands.”

Clinton’s strength (or other favored D candidate) is the media’s option of printing what they want and omitting what they wish. It has already begun. Each time a GOP candidate comments about a current issue, it gets negative press. If Clinton says something stupid, that comment never sees the light of day in the MSM. It does no good to complain to the media because those complaints are not addressed either. GOP candidates should be very selective of which media outlets they choose to appear on. Almost all are playing “gotcha” games. The GOP will not win this war – ask McCain and Romney. Of course, having every GOP member of both houses running for President does give the media a lot of ammunition.

“The mantra “it’s her turn” has broad appeal among Democrats.” Sometimes the jokes write themselves.

I don’t see how Billary is going to run again. Her health and age might not allow it. Democrats shouldn’t count on the same demographics which turned out for Obama. That coalition crested during 2012, disappeared during the midterms, and I don’t think anyone else has the necessary blind-faith-in-our-Messiah-hype to revive it.

I wouldn’t be surprised by a breakout candidate (on either side) who can simplify the discussion as to why we need to close the border and reduce immigration: economic security for US citizens and legal immigrants.

Hillary must be furious with Brian Williams. The recent reports on his blatant lies are generating reminders of her old “sniper fire” lie and many of those who didn’t hear about it back then will hear about it now.

I don’t think Clinton will be the nominee, but I have trouble seeing Warren or Biden getting it either.

Who else is there? Cory Booker? Cuomo seems to be mired in scandal — but Dems probably say the same about Perry.

Candidates need enthusiasm, where is Clinton’s.

If she basically runs unopposed does she get any movement going. For the other potential D candidates they see a hurdle of the Clinton machine and the mood of the country. It is a tough cycle for a non-Clinton D candidate to win in Nov.