Not a Tough Choice or even a Hard Choice. 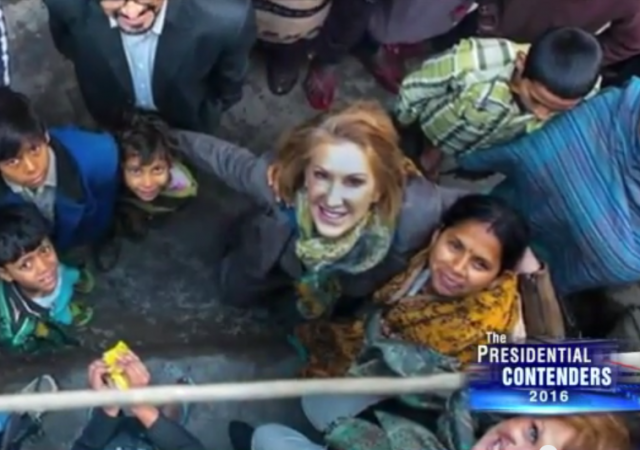 Her campaign wasn’t great, but then again, which of the Republican candidates really was going to beat Babs?

Carly’s speech at the Iowa Freedom Summit was well received, and gained her a lot of attention as a candidate, as it did Scott Walker.

She is talking about possibly running, and is setting up her spring schedule in a way that makes it seem she has presidential politics in mind.

Looks like she could take the fight to Hillary, and dull the War on Women Democratic meme. But she will need a big breakout to make her a leading candidate.

How will we know she is a potential threat to Hillary? When national media starts digging into her high school years.

Carly versus Hillary — could be interesting.

A woman who made it on her own in a man’s business world versus a woman who rode her husband’s coattails her entire life and never accomplished anything. 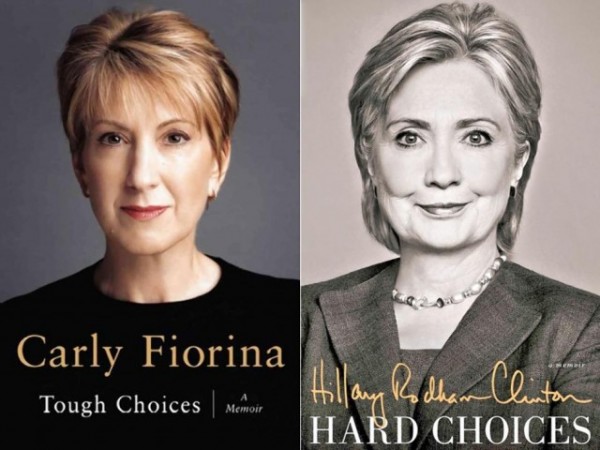 “A woman who made it on her own in a man’s business world versus a woman who rode her husband’s coattails her entire life and never accomplished anything.”

Expect the left to attack her in the most vicious manner possible. They cannot allow anyone to deviate from the faith and they will go after Fiorina like an islamist after an apostate.

The Affirmative Action jerk who almost single-handedly reduced one of America’s most dynamic tech companies to its current pitiful status? Right, that’s what America needs.

And considered by many as the worst female CEO in American history.
Under her leadership HP stock lost half its value.
Billy boy, are you getting mesuginna? Who in their right mind would recommend someone like her, with zero political savvy or experience (never elected to any public office) to run for the presidency?

Carly would be the GOP’s Obama-and-Carter-rolled-into-one. She’s loves flying around to famous places, hobnobbing with important people, giving speeches to rapt audiences, and being the center of attention (she was often referred to as the “rock star” CEO).

Yes, she would be better than Hillary, but after one term Chelsea Clinton could beat her.

And I know of what I speak. I have worked frequently and very closely with many, many, many HP employees in may different capacities over the last 38 years (and have done a miniscule amount of contract work for the company). Please believe me, she is the *WORST* thing that ever happened to Bill & Dave’s (that’s William Hewlett & David Packard for you non-geeks) company.

We were still in the pit of despair that is California when Ms. Fiorina ran. I thought that my husband’s head would explode. As a dedicated techie, he was horrified by her destruction of HP. That the California Republicans thought her to be a great candidate disgusted him. Of course, one must bear in mind what has become of California, the place which was once Reagan Country.

I am now shaking my head that the idiot national Republican party seems to be following the lead of the California brain trust. McCain, Romney, BushIII, Christie, Fiorina-Spare me. Note to RINOs: Your strategy DOESN’T WORK.

I would have voted for Fiorina over Boxer; I would not vote for Fiorina over Walker, Perry, Cruz or Paul. And that’s not just because of what she did to first my Lucent and then my HP stock… Though it’s telling that some who worked with her at HP opined that she was far better at promoting herself than at actually leading.

Really, if Texas under Perry or Wisconsin under Walker had performed the way HP did under Carly, we wouldn’t even be talking about them. We can afford to wait for a female candidate with a proven track record of leadership. Let’s be patient and do that.

Have you considered that Ms. Fiorina was CEO of a doomed corporation like Radio Shack? Time have changed. America no longer builds electronic devices – those are all designed and built in Asia these days.

HP was founded by two guys who started producing audio oscillators in a garage in Palo Alto (I actually have a still-working vacuum-tube HP 200CD from the fifties in my basement!) Although the HP stock price may not have done so well, listen to Fiorina’s side of the story before you adopt the media spin: https://www.youtube.com/watch?feature=player_embedded&v=lNHV2yyUblw

“The patient died, but the operation was a success!” <—– surgeons to avoid

I don’t have to listen to her excuses. I watched her as she ran HO into the ground.

When Romney was running, I seem to recall a lot of “excuses” for what he did for a living – buying up struggling companies and trying to turn them around. Sometimes that wasn’t possible and they had to break up the company and sell off the pieces. HP is a company whose time has come and gone. Very few Americans use electronic test equipment these days. Computers and printers have become commodities made by robots in China. All I’m saying is that God herself couldn’t have saved HP from obsolescence. I don’t blame Fiorina for trying.

What sane conservative would vote for Carly given any halfway decent alternative?

The woman was put in charge of one of the best tech companies in the US basically as an AA hire. She then proceeded to tank the company. To avoid being fired she then arranged for a merger that everyone except for herself knew was one of the worst ideas in American business.

Frankly if she endorsed some economic plan, I would oppose it because it must be horrible.

Okay, no merger was worse than the Time-Warner/AOL deal. Seriously.

the more we saw of carly in her run for california governor, the less we liked her. i can’t imagine her having much of any national appeal…even against the execrable hillary.

To be honest, they’re about equally qualified. But media bias can make a queen or serf of any of us.

Fiorina has skills and a record of success, but presidential material? Hmmm.

There are dozens/hundreds? of men with her business record or better, so why her? Is it because she’s a her?

I know little of her and will give her an honest hearing should she run, but I have a hard time believing she’ll move me from Walker.

It’s nice to have a woman in the field, and a business woman rather than a career politician sounds good. But she needs much more name recognition and proven track record, which HP doesn’t exactly give her.

Seems like companies like Dell or Compaq and HP were stuck in a manufacturing rut which we lost to Korea and Japan, along with TV’s. They blame her for not remaining “innovative” and cutting R&D … I have no idea if that was fair or not.

She was CEO from 1999 to 2005, dot com bust and Nasdaq 5100 to 1400 … it would be hard to lay all the blame on her for the stock drop in those years. Seems she actually outperformed CSCO and IBM, as far as I could see. But a lot of those old stalwarts were becoming dinosaurs.

Carly would have to really distinguish herself as a clear speaker of conservative values, plus be a swashbuckler against the leftist DC centrist narrative of the Democrats, to be a contender even for VP. But I didn’t see that much clarity so far, and she got noticed mostly for that Hillary dig. Comments here seem to think her CEO problems were bigger than just taking over an aging dinosaur … maybe so, I don’t know.

If she were a male, if this were Chuck Flowers we were talking about, and the only leadership experience we had to judge him on was his performance at HP, would he still be a Thing?

If the best we can say is, “well, yeah, maybe he was an okay CEO, maybe it’s not his fault that the company tanked under his leadership”, then I’d say no. CEOs whose companies have tanked without it being explicitly their fault are thick on the ground. Our Chuck would have to have more than that to offer us if he wanted to stand up to the likes of Walker, Cruz and Perry.

I hate to burst your bubble, but I know several guys who worked for Hewlett Packard during the time Carly was there, and they say she wrecked the company, which went into a tail spin during her tenure.

This would be like asking voters to pick between Sauron and Lord Voldemort – trying to choose the lesser evil. Last thing we need is someone experienced to manage America’s decline. What’s needed is a turnaround expert.

I doubt Fiorina had to suffer from too much oppo research when she ran for the Senate in California; in a theoretically competitive national election she’d be utterly destroyed. Hard to imagine her even winning the primary.

While Carly Fiorina was head of Hewlett Packard, I bought a gloriously functional small business printer. It had a footprint only slightly bigger than the classic printer that was in so many offices at the time, and it had two paper trays that held a ream (500 pages) of paper, each. It printed 30 pages a minute, with very little fuss.

The size and number of the paper trays is important. Filling the printer by the ream meant that I did not have the eternal open half-ream of paper cluttering my office counters, and the two drawers meant I could choose to have a two reams on hand, or have either another size paper or even envelopes loaded in the alternative tray.

I haven’t seen anything like it since. The models available in business supply stores are toys.

After Ms. Fiorina left, Hewlett Packard decided not to support the printer, or would do so only reluctantly and inelegantly, so that every other operating system software update would disable the printer. I was forced to keep up with the OS updates for security reasons, and because I interface with the US government, which has been known to be captivated by a desire to change THEIR software on at least about a quarterly basis.

Then, they just stopped supporting it at all, and my printer became completely unresponsive. I took it to a recycling center, and watched the people there junk a working printer because nobody else could use it, either.

I do not know what Carly Fiorina’s political future holds, but I do know that Hewlett Packard released some amazing products during her tenure, and they no longer act like they seriously want anybody’s money. I will never buy anything from HP again. That company is headed for bankruptcy, because it is being run by idiots.