“Likud is the only choice” 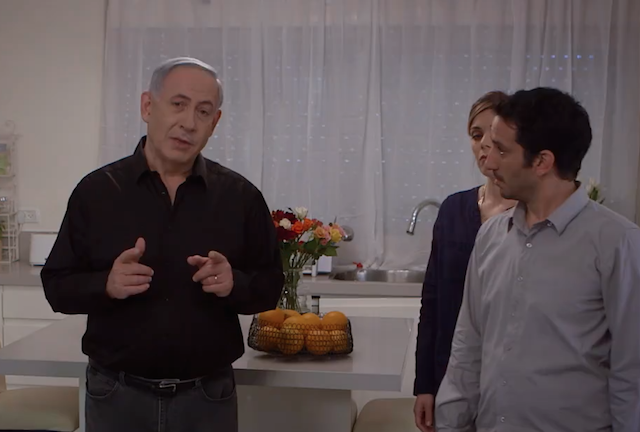 There’s something bizarre about seeing Israeli Prime Minister Benjamin Netanyahu promoting himself in a lighthearted campaign ad; but the latest spot from the Likud party brings a nice slice of humanity into an otherwise-bitterly contested election, and offers up a laugh or two in the process.

Via the Israel National News:

“Look, it’s either me or Tzipi [Livni] and Buji [Herzog],” he explains to the bewildered couple. The couple immediately protests that their children would need to babysit Herzog, and not the other way around. In addition, “by the time we return we’d have no house… he’d even hand over the carpets” – a play on the Hebrew words “shtichim” (carpets) and “shtachim” (territories).

As for “Tzipi” – the woman says she doubts that she would stay in the same place for two hours, and Netanyahu agrees she would probably have gone over to the neighbors’ by the time they returned. This, of course, is a swipe at Livni’s frequent migration from one political party to another.

At one point in the video, Netanyahu can be seen sitting in the couple’s living room, watching Likud’s earlier, banned campaign video, which featured Netanyahu as a kindergarten teacher trying to control rowdy children, who played the roles of Livni, Yesh Atid’s Yair Lapid, Jewish Home’s Naftali Bennett and Yisrael Beytenu’s Avigdor Liberman. The video was banned because of the illegal use of child actors, but it seems the new video is a spin-off of sorts.

When the couple returns and greets him with the word “Shalom” – hello – but also the word for “peace”, Netanyahu responds “but not at any price.”

You can watch here:

This beats all those super bowl ads big time! LOVE IT!

Can’t speak/understand Hebrew (?) but I like the tone… sweet, without being too cartoonish. Do you think any candidate in the US would feel confident enough to do this… and be able to?

Sen. Ted Cruz could pull off a piece like this with just a little bit of coaching. He’s personable enough.

Gov. Scott Walker could probably pull off something like this. He’s not as wooden as everybody makes him out to be, but it would have to be the right scripting.

Dr. Ben Carson has the personality to pull it off, but I think that everybody would expect him to as an outside play, and for that reason alone he would not.

Gov. Rick Perry has the personality to do it, but I think that it would be seen as him not taking the issues seriously given his prior stumbling when pressed for issue focus, so it would be a bad campaign choice as it would open him up to the “you’re making a personal attack because you can’t discuss the issues” line.

I’m going to say it right now, Benjamin Netanyahu is in the same class as Reagan and Thatcher.

A national vision for the country, check.

“A liar.” Per George W. Bush, who accused him of intentionally undermining the Annapolis peace process, and deceiving Bush of his intentions.

A pain in the ass, per Bill Clinton, who found him so abrasive and obnoxious at their first meeting he bleated within earshot of reporters: “who the fuc# does he think he is?”

A “Hatichat Hara!” (Hebrew, but won’t pass censorship here), from his first wife, who pregnant with their child, divorced him upon learning he was stupping another woman at the time.

And in general the Israeli public doesn’t like him very much. Last month’s survey for the Jerusalem Post showed almost two-thirds of Israelis would prefer some ‘other’ prime minister. Though the poll indicated his Likud party remained the most popular , voters did’t want him leading it.

None of that means his views about the Palestinians, and Iran, and Islamic terrorism isn’t correct, only that it’s too bad Bibi’s the voice of Israel broadcasting them.

You know why there’s an election in Israel? Before December word got to Netanyahu that obama was gonna throw the book at Israel. So, Netanyahu called the elections. Which he is expected to win.

And, now that the Superbowl is over Netanyahu will address both houses of Congress. In mid-March. Before Israelis go to the polls.

obama’s “legacy” is its own petard. (And, when Shakespeare said ‘petard’ … he meant ‘fart.’) For obama? It may be the smell that overtakes his legacy.

i’ve seen a sub-titled version, and, if it’s accurate, someone needs to tell him that it is not the j*b of the government to take care of people’s children, or adults, for that matter.

socialism is stupid, no matter which country it is practiced in.

“Provide for the common defense….”

In Israel, it is the government’s job to ensure that the children are able to live, to serve to protect their nation, and to defend itself.

Bibi knows his job, his role.

[I agree with you about socialism – and Israel is a socialist-leaning parliamentarian system, not a republic, like the US. But as I noted, it is the job of the central, federal government to provide for the defense of the nation and its citizens – including the most precious future, the children – in a free country, that is.]

Wrap your minds around the reality that Bibi is the Leader of the Free World and he has two allies(at least for now): Abbott and Harper.