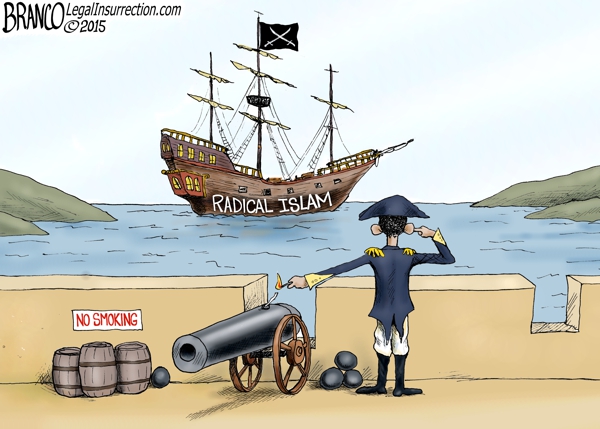 Maybe I am reading too much into this, but is the cannon pointing left for a reason? I hope so.

Sadly, if it is pointed to the left for a reason, you can be sure there are no balls being used.

I think the lack of balls is a chronic problem.

From behind the cannon, it’s pointing to the right.

One thing is certain: he is no Timothy Murphy!

NO. NO. NO. There is no such thing as Radical Islam.

So have I deemed it. So let it be written.

Left and down: jerk trigger symptom!

The big, stick-out ears are a nice touch, but I think you drew his giant bloated head too small. 😉

I’m also not sure he’d be brave enough to light that fuse (and isn’t it raaaaaacist to depict him performing a manual labor?). I picture him waving a white flag and trying to surrender, and then, as the terrorists are preparing to saw off his head, he’s screaming “but, but, but don’t you understand that I lived in Indonesia when I was 5, and had a Muslim step-daddy, and think the call to prayer is the most beautiful sound in all the world? Why would you want to kill meeeeeeeeeee . . . . ?!!?”

So true. Look where the cannon is pointed. Not at the enemy, but at his own fort.

The finger in the ear reminded me of the “hear no evil” “see no evil” “speak no evil” monkey.

A cartoon depicting Obama as a monkey unable to identify evil might be a way to re-create the Big Bang. The Left’s heads will all simultaneously and collectively explode.

Oh boy!
You are in so much trouble!

Did you just call him a monkey?
Oh, boy!
Just wait till sharpton finds out!
And that knock on your door, that’s the IRS !!
😯

LOL. My favorite Branco yet.

One minor quibble with this most excellent cartoon: the fraudster-in-chief is shown with his right finger in his ear; I suggest that it’s much more likely that he is SALUTING the flagship of Radical Islam!