And carry a big selfie stick. 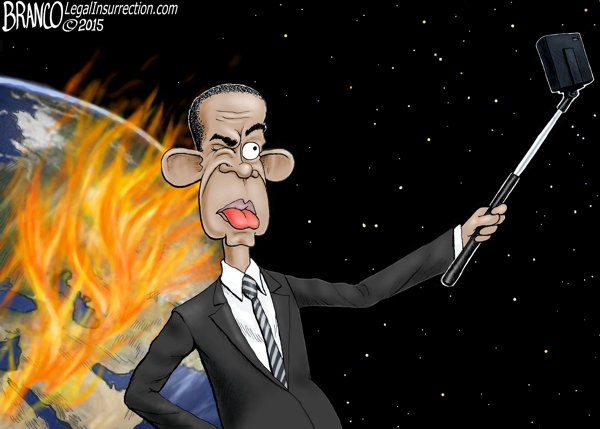 Trouble is that he is not alone.

A selfie stick… the perfect gift for despots who cannot play the fiddle.

I thought that was a golf club. I guess it can be few things in a cartoon.

Obama seems to be taking his foreign policy and political philosophy lessons from Isaac Asimov.

In “the Foundation” he has a character (Salvor Hardin) say:

“Violence … is the last refuge of the incompetent.”

Or, as Obama put it:

Obama thinks he is Salvor Hardin (not the Mule)

A two in one “selfie stick/golf club” for the man.
In this case would the club be a nine iron?

Won’t it be great when we have a President again?

(Naturally, I hesitate to describe what exactly it is that we have now.)

Barack is either the new version of Louis 14 or perhaps he’s also in the running to be the new Louis 16!

Personally, Barack is sufficiently two-faced so that he’s in the running for both; quite the trick, eh! Of course, that might also require that a new use be made of Club Gitmo.

This is who Obama thinks he is:

Salvor Hardin was well known in the Foundation for his epigrams, which recur throughout the series, including:

“An atom-blaster is a good weapon, but it can point both ways.”

“It pays to be obvious, especially if you have a reputation for subtlety.”

“To succeed, planning alone is insufficient. One must improvise as well.”

“Never let your sense of morals prevent you from doing what is right.”

His best-known maxim, “Violence is the last refuge of the incompetent”, became one of Isaac Asimov’s favorite sayings.

The last three really sound like they are ideas adopted by Obama.

Of course, if you are a Schlock Mercenary fan:

6. If violence wasn’t your last resort, you failed to resort to enough of it.

Moronic epigrams are a refuge of the incompetent.