Do you even journalism, bro? 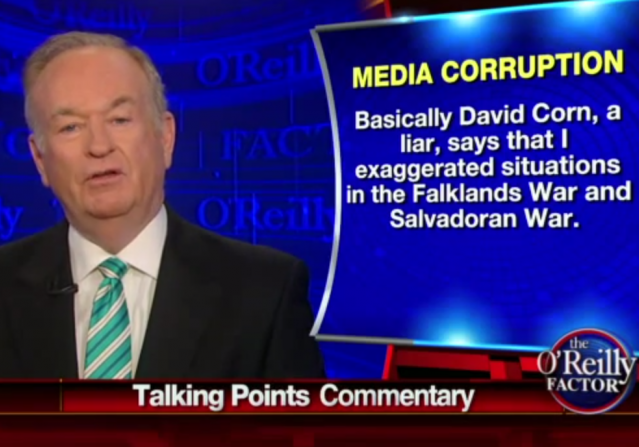 Brian Williams’ tragic exit meant that a right-leaning media behemoth must too, suffer the same fate, according to the leftist code of retribution.

MJ and crew accused O’Reilly of lying about his reporting of The Falklands War in 1982.

Their ‘scoop’ seems to revolve around how Mother Jones is defining, “war action” and other semantics they themselves haven’t yet pieced together. Namely that to cover The Falklands War and reporting directly from The Falklands are not mutually exclusive.

O’Reilly responded callng, David Corn a “despicable guttersnipe” and “a liar.” He denied any discrepancy, and called the entire Mother Jones reprt “a piece of garbage.”

Yesterday, O’Reilly directly addressed Corn’s accusations. He produced memos and letters from 33 years ago. He also addressed the issues that we pointed out above, as well as the obvious Brian Williams retributive angle.

“We have rock solid proof that David Corn smeared me and some websites that picked up his defamation did as well… Real journalists knew this story was B.S. from the jump. They knew Corn was trying to take the Brian Williams situation and wrap it around my neck for ideological reasons.”

Which reminds me of The Wire, “you come at The King, you best not miss.”

Geesh! They’re digging up things from half century ago?

The left can be comical when they put their festering little cesspool minds to it.

I’m not a Big O’Reilly fan, but this Corn-Mama Jones stuff is the merest BULLSHIT.

… In 1986, when Moore became the editor of Mother Jones, a liberal political magazine, he moved to California and The Michigan Voice was shut down.

After four months at Mother Jones, Moore was fired. Matt Labash of The Weekly Standard reported this was for refusing to print an article by Paul Berman that was critical of the Sandinista human rights record in Nicaragua.[23] Moore refused to run the article, believing it to be inaccurate. “The article was flatly wrong and the worst kind of patronizing bullshit. You would scarcely know from it that the United States had been at war with Nicaragua for the last five years.”[24] Moore believes that Mother Jones fired him because of the publisher’s refusal to allow him to cover a story on the GM plant closings in his hometown of Flint, Michigan. He responded by putting laid-off GM worker Ben Hamper (who was also writing for the same magazine at the time) on the magazine’s cover, leading to his termination. Moore sued for wrongful dismissal, and settled out of court for $58,000, providing him with seed money for his first film, Roger & Me.[25]

Here is something worthy of Mother Jones.

Apparently Bloomberg’s Mayors Against Illegal Guns playbook has been discovered. From the Washington Examiner:

Newly uncovered Democratic anti-NRA talking points urge anti-gun advocates and politicians to hype high-profile gun incidents like the Florida slaying of Trayvon Martin to win support for new gun control laws. In talking points likely followed by top Democratic leaders including President Obama after the Sandy Hook Elementary School shootings in December, the anti-gun “guide” urged gun foes to speak out when a shooting “creates a unique climate” to shout down the National Rifle Association.
“The most powerful time to communicate is when concern and emotions are running at their peak,” said the 80-page document titled “Preventing Gun Violence Through Effective Messaging,” and produced by three Democratic firms led by the polling and research outfit Greenberg Quinlan Rosner Research. . . .
It is chilling how they want to use tragedies when the emotions are most raw to push their gun control program.

Geez, you needed a secret memo to know this?

Three times in his response and his exchanges with Goldberg and Rivera, O’Reilly took hits at the “net,” i.e., the internet, as if the medium was as responsible as Mother Jones. He’s done this before. O’Reilly is a closet elitist who resents the pajamas media culture and the power it has given the citizen. I don’t trust him as far as I can throw him.

“Those darn kids and their intertubes!”

I believe it to be “Mutha Jones’

After O’Reilly defended himself, he had Geraldo on, since Geraldo had been accused of some thing, which even he said he was sorry he said. But then Geraldo goes on about how scary it is to have these online people accusing people … we need editors I guess. Geraldo then bashes online bloggers “in their mother’s basements” … like all bloggers are just like Mother Jones. “Scary times” he kept saying.

I was hoping O’Reilly would throw a chair at him, break his nose like the good old days, when Geraldo showed us how to get ratings with intellectual discussions.
https://www.youtube.com/watch?v=S1KT1QoSCT8

O’Reilly kinda agreed with him, apparently unaware of just how biased and dishonest big media is already. O’Reilly was being accused of being too hard on Brian Williams, but he said he had stuck up for Williams. Which he had, along with other of the “professionals” that are satisfied feeding us our daily doses of “professional” news, hoping we don’t read too many bloggers, who all post lies from their basements.

O’Reilly also said recently it was only the (professional) press that is given “special press rights” in the constitution, to “watch out for the folks”.

These guys see themselves as a special people, that fourth estate that makes sure we are informed of the important things. Sorry … anybody not reading good blogs and studying on their own is misled by those DC/NY centric figureheads. They have more reach than most blogs, but they aren’t the “tip of the spear”.

The media’s online “talent” and byliners and the government’s upper level officials, by dint of their inwardly justified lies, spinnage, and omissions, operate in a world of their own creation, a sort of journalistic, bureaucratic holograph of the world as they see in their pointy little heads.

There are two kinds of people in this country….. the classically trained professional journalists with the highest ethical standards and people who tell the truth.