A Test Iran Is Sure to Pass

A Test Iran Is Sure to Pass

Kerry says that the U.S. is “testing” Iran, but if Iran never fails, what does the test prove? 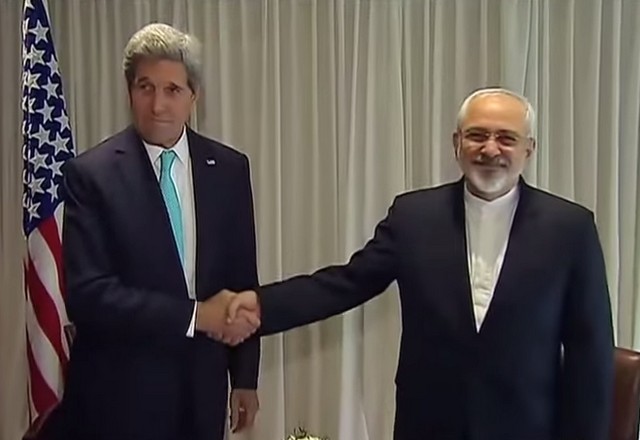 At a Senate Appropriations Committee Hearing yesterday, Secretary of State John Kerry took aim at critics of the Obama administration’s posture towards Iran:

World powers grouped under the so-called P5+1 “had made inroads” since reaching an interim deal with Iran in November 2013 on reining in its suspect nuclear program, Kerry said.

Taking aim at critics, such as official Israel, that are opposed to the agreement, Kerry said they did not “know what the deal is.”

“I caution people to wait and see what these negotiations produce. Since 2013, we have been testing whether or we can achieve that goal diplomatically — I don’t know yet,” Kerry insisted.

Testing? 15 months after the P5+1 nations agreed to the Joint Plan of Action (JPOA), the administration is still “testing?”

Here’s one thing we know. The JPOA (.pdf) required this:

A Joint Commission of E3/EU+3 and Iran will be established to monitor the implementation of the near-term measures and address issues that may arise, with the IAEA responsible for verification of nuclear-related measures. The Joint Commission will work with the IAEA to facilitate resolution of past and present issues of concern.

So how has the “resolution of past and present issues” with International Atomic Energy Agency (IAEA) worked out? Reuters reported last week that Iran was not meeting its obligations to the IAEA.

The confidential report by the International Atomic Energy Agency (IAEA), obtained by Reuters, said Tehran was continuing to withhold full cooperation in two areas of a long-running IAEA investigation that it had committed to giving by August last year.

“Iran has not provided any explanations that enable the agency to clarify the outstanding practical measures,” the IAEA said, referring to allegations of explosives tests and other activity that could be used to develop nuclear bombs.

In other words, after committing to coming clean to the IAEA and meeting its obligations by a definite deadline, Iran has not d0ne so. In other words it failed its test. The result of Iran’s stonewalling was summed up by the IAEA’s Director General last month:

As far as Iran is concerned, the Agency is able to verify the non-diversion of nuclear material declared to us by Iran under its Safeguards Agreement.

Kerry says his critics don’t know “what the deal is.” Maybe, but rumors in past weeks have subsequently been reported as fact. I think we may know more about the deal he is fashioning than he cares to admit.

But the bigger problem is that we do know that his deal is not addressing Iran’s past nuclear research, the details of which it continues to hide from the IAEA in defiance of the JPOA. This is a point made by proliferation expert Emily Landau in the video embedded below. She says that “[t]here seems to be some kind of disconnect between the political process, the P5+1, Iran political process that’s been going on for the last 13 months and the parallel process with the IAEA [International Atomic Energy Agency] trying to clear up some of these questions with regard to Iran’s weaponizations activities, and you would think that these two processes should be fused together, because, of course, weaponization activities are at the heart of this negotiation.”

Kerry pretends if we just trust him to make a deal addressing Iran’s known nuclear program, Iran will not be able to develop a nuclear weapon. But what he, in his recklessness, has shown over the course of these negotiations that he cares nothing about Iran’s past nuclear research. That is a huge omission. Instead of demanding that any further  sanctions relief come only after Iran satisfies the IAEA’s demands, Kerry has allowed Iran billions in relief as they drag out negotiations. He is rewarding them for spitting in his face.

Even if we had no reason to suspect Iran of having a secret nuclear program, this would still be problematic. If Kerry is unwilling to make Iran accountable now, what are the chances he will make Iran accountable in the future? Once Iran knows it can get away with violating the JPOA, which Kerry has allowed without consequences to Iran, why will it obey an agreement in the future?

Kerry can’t pass it, so how can Iran?

Is there a thread up about this? I can’t find one.

1.In order to have a website, you will be required to have a license
2.FCC Will monitor content and comments made on your website
3.Net Neutrality is about making sure the liberals don’t lose the battle in content on the internet to conservatives.
4.You WILL have limited access to websites that you were normally able to access routinely.
5.FCC will control how much traffic goes to any certain site, if one site is getting too much attention, you will lose the ability to see it.

That’s what the “tip line” is for.

“The incompetence of the Obama administration is amazing. Did they do this on purpose?
Check it out:

The Pentagon let slip that one of its training camps to help fight Islamic State terrorists is in Jordan — information the pro-U.S. kingdom had specifically requested be kept private, and the latest gaffe in a series of sensitive leaks coming out of the Department of Defense.

In order to hide its flub, which was first announced to reporters during a briefing last week, the Pentagon has scrubbed its public transcripts of any mention of the training camp…”

A fish phucs up from the head down.

While we STILL DO have better people in Federal service than we deserve (and a lot of them are paying a high price to serve us), try to think of ANY Federal agency that isn’t a dirty joke.

I can’t think of one. And that includes many of the ones we used to be really proud of.

The administration’s goal is not to prevent Iran from developing nuclear weapons. The administration’s goal is to get any kind of deal they can, the existence of which fulfill’s Obama’s promise. Whether it’s a good deal or a harmful deal is entirely irrelevant to them in the big picture. They’ll get what they can, but they’ll take anything so Obama can claim a promise kept.

Barracula will be able to leave office crowing about his “achievements”.

IF we’re luck enough to avoid a major cataclysm prior to that.

Afterwards, he’ll point at his successor in office.

“Tsk, tsk, tsk. Look at how my legacy has been squandered…”