It’s hard to think of a single reason 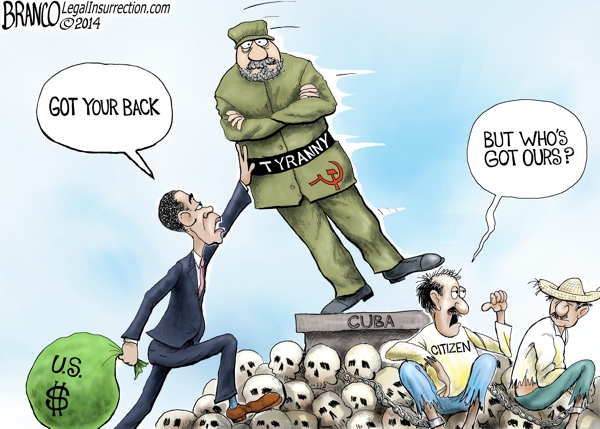 An air of secrecy surrounds the fate of 53 political prisoners whom Cuba agreed to free in its historic deal with the United States last month, as Washington and Havana’s refusal to publicly identify the dissidents is fueling suspicion over Cuba’s intentions…

…[O]fficials said a prisoner release was not a precondition for renewing diplomatic ties. White House press secretary Josh Earnest said Monday that not everyone on the list has been set free yet, but it was always understood that they would be released “in stages.”…

The lack of transparency is contributing to a growing sense of concern that Havana will not follow through on its promises.

If there’s “a growing sense of concern,” it’s certainly not on the part of Obama administration officials, for whom this quid pro quo was almost certainly for show. As in many of its “negotiations” with countries hostile to the US, the appearance of getting something in exchange for what we were giving up was only a thin veneer, because the administration was determined to capitulate.

But even if the Obama administration really did care about the fate of these prisoners, it has done nothing—absolutely nothing—to convince the Castros or any other leaders on earth to fear retaliation if they don’t follow through with the terms of any agreement they might make with the US.

This is the Obama legacy. Prior to Obama, although there were periodic shifts in policy, the world knew it could count on a basic steadfastness, sameness, and reliability from the American government. No matter what party the US president was from, or how hardline or conciliatory, with a few exceptions (Vietnam in the 70s, for example) a certain basic commitment was there no matter what changes occurred in administrations.

No longer. Obama has left that assumption in tatters, and the world will act accordingly.

The problem between the US and Cuba is not economic sanctions. The problem is the Stalinist Cuban leaders, and the genocidal maniacs in the US who make excuses for them.

We know this president is almost entirely ideological versus practical or realistic. So actions to satisfy “beliefs” shouldn’t surprise anyone. Yet the way some of the worst regimes are treated is still a huge mystery. Reward Cuba but punish North Korea? Give Iran more leeway than any administration in modern history? Perhaps this administration believes that by being so conciliatory, in the mold of many European nations, they can reduce the need to make “tough” decisions. Foreign leaders will now go easy on the U.S., with a better “impression” and feeling or us. Weird.

Caught a report last night about the spurt of Cuban refugees coming to the US, who fear the possible end to “Wet Foot, Dry Foot” (wet foot, you go back to Cuba; dry foot, you get political asylum).

They gave up zip, and Barracula folded like a cheap plastic tarp.

Even IF they released the 53, it would be just like them to scoop them back up a week later. It would all be a dark Marxist joke to them.

As, indeed, we seem to see America becoming daily…

Obama is just jealous he can’t have his own prisons for his political enemies.

Obama could care less if Cuba fulfills any deal made. A wide open, unsanctioned Cuba makes it easier to kill Gitmo, plus leftists will have a Marxist utopia (lol) 90 miles off the Florida coast. Why, Cuba’s centrally controlled heath care system is one of the wonders of the world, you know. Plus there’s all that crony capitalist money they’ll get under the table from corporations eager to begin or resume business in Cuba. So, Obama is not going to delay or kill any deal with Cuba merely because they didn’t release people. That aspect of the deal was just for show.

because he promised to?