“Too Dumb” criticisms of American Sniper

“Too Dumb” criticisms of American Sniper

Some of the critics need to look in the mirror. 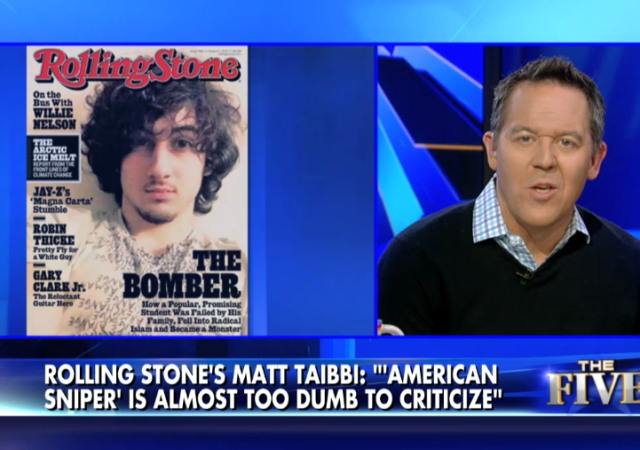 It’s a given that Hollywood and the entertainment industry are dominated by liberals but the success of the American Sniper film has caused some of them to really lose it.

Michael Moore and Seth Rogen have been widely criticized for their comments on the film. Rolling Stone’s Matt Taibbi published a column that was over the top in its insulting nature:

‘American Sniper’ Is Almost Too Dumb to Criticize

I saw American Sniper last night, and hated it slightly less than I expected to. Like most Clint Eastwood movies – and I like Clint Eastwood movies for the most part – it’s a simple, well-lit little fairy tale with the nutritional value of a fortune cookie that serves up a neatly-arranged helping of cheers and tears for target audiences, and panics at the thought of embracing more than one or two ideas at any time.

It’s usually silly to get upset about the self-righteous way Hollywood moviemakers routinely turn serious subjects into baby food. Film-industry people angrily reject the notion that their movies have to be about anything (except things like “character” and “narrative” and “arc,” subjects they can talk about endlessly).

This is the same Hollywood culture that turned the horror and divisiveness of the Vietnam War era into a movie about a platitude-spewing doofus with leg braces who in the face of terrible moral choices eats chocolates and plays Ping-Pong. The message of Forrest Gump was that if you think about the hard stuff too much, you’ll either get AIDS or lose your legs. Meanwhile, the hero is the idiot who just shrugs and says “Whatever!” whenever his country asks him to do something crazy.

Greg Gutfeld and the panel of The Five addressed the issue yesterday. Watch the segment below.

Rolling Stoner Taibbi found a cute way to attack the film, without actually attacking the American Soldier: He criticized Hollywood.

It was not a “fairy tale”. It was highly accurate. There was no disclaimer “the characters in this film are fictitious and have no relation to any actual individual, living or dead”. It really happened. No “fairy tale”.

It had a lot more “nutritional value of a fortune cookie”. I have never seen the impossibility of a man transitioning in 24 hours from a combat environment to a home, wife, kids environment portrayed on film like “American Sniper” did, absolutely brilliantly by Eastwood. It also exposed the unconscionable savagery of the Iraqi unlawful combatants.

It didn’t turn a “serious subject into baby food”. As a matter of fact, every single movie preview shown before “American Sniper”, e.g., “Furious 7”, e.g., “Kingsmen”, e.g., “Terminator Genisys”, were intellectually bankrupt, i.e., baby food, but the likelihood of Taibbi making the same complaint about them is zero.

And “American Sniper” is the far side of the universe compared to “Forrest Gump”, which is why Taibbi hated it as much as he did.

The ultimate oxymoron is pro-abortion, anti-war, human rights advocate. Apparently, pro-abortionists prefer a captive victim who is incapable of self-defense and lacks a voice to protest a summary capital execution. Perhaps that’s why pro-abortionists are typically opposed to the 2nd Amendment and make an effort to stifle speech that exposes their sanctimonious hypocrisy – bigotry.

Taibbi is almost too… Oh, never mind. I don’t share his fairytale: spontaneous conception, as if evolution of a human life is discontinuous from conception. It doesn’t matter when a human life acquires its human character. That determination cannot be accomplished in the scientific domain. It is an article of faith. Only that the process will end with a natural, accidental, or premeditated (e.g. abortion) death. Pro-abortionists should not take comfort in either their fairytale or faith, because the former is simply false and the latter is illogical.

You left out Vegan who wears leather jackets.

The most surprising thing is that Alec Baldwin hasn’t been locked up yet for the protection of the public and himself.

Taibbi has never been anything but an arrogant little leftist prig. Anyone see him argue he shouldn’t be expected to wear a coat and tie to job interviews? It oozes from him.

I am worried about Bob Bekel. He seems so deflated that we might want to consider a suicide watch fo the remainder of Obama’s presidency.

Yea, me to. I have no good reason for it but I have always liked Bob, I may not agree with him 99% of the time, but I do like him. But when he is making impeachment jokes instead of making an argument that means that even he realized how nuts the “reviewer” is and it obviously disturbed him.