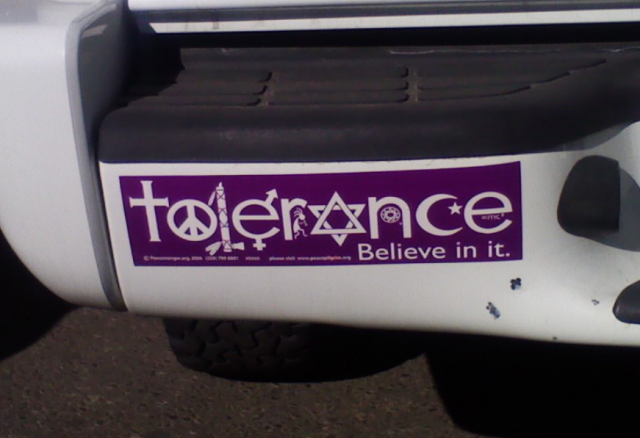 Of course (may I say “of course”?), there is a sense in which the antinomy is illusory, since any robust liberalism, i.e., a liberalism buttressed by a core of conservative backbone, understands that tolerance, if it is to flourish, cannot be synonymous with capitulation to ideas that would exploit tolerance only to destroy it. The “openness” that liberal society rightly cherishes is not a vacuous openness to all points of view: it is not “value neutral.” It need not, indeed it cannot, say Yes to all comers.

And yet that basic instinct for practical self-preservation, that paradoxical prohibition necessary for the general openness, is often ignored today. “Democracy is not a suicide pact”—at least, it shouldn’t be.

The origin of that last phrase lies in several statements by historic Americans, but the most specific one was by Supreme Court Justice Associate Justice Robert Jackson in 1949, in a dissent to the decision in the freedom of speech case known as Terminiello:

…[Jackson] wrote a twenty-four page dissent in response to the Court’s four page decision, which concluded: “The choice is not between order and liberty. It is between liberty with order and anarchy without either. There is danger that, if the court does not temper its doctrinaire logic with a little practical wisdom, it will convert the constitutional Bill of Rights into a suicide pact.”

That’s a possibility we’re facing now. What used to be known as Western Civilization can’t seem to get out of its own way. But its enemies have no such problem; excessive tolerance in not their thing, and yet the excessive tolerance of the West is something on which they heavily rely.

It used to be growing up that I had to be understanding of those who had the freedom to offend me. I was to be tolerant of a KKK or Nazi rally.

So said the ACLU.

At least, or so I thought, I had the same freedom to voice my disgust at what I saw going on.

Today, if the cross I put up on a hill to memorialize the fallen heroes of a war offends you, I must tear it down.

Whereas, if the public bathroom I wish to be segregated according to sex inconveniences someone who is confused about the gender biology gave them, then that custom must be torn down too and all must suffer too.

Tolerance when solely ruled by one philosophy will be intolerant to another philosophy.

So called tolerance when it takes the place of reason becomes intolerant.

Intellectually, I supported the rights of the Nazis to march in Skokie. But emotionally, I applauded those who advocated using baseball bats on the skulls of those same Nazis if they actually exercized those First Amendment rights on the streets of Skokie.

In 1977, I resigned from the ACLU over Skokie. And I donated my ACLU membership fees to Meir Kahane, of Blessed Memory!

Hold on. Why are you defining the word “Liberals” (as is employed by Leftists) as a derivative of “Classical Liberals”?

and this “i.e., a liberalism buttressed by a core of conservative backbone…” Calling yourself a conservative doesn’t say anything about your position on limited government, free markets and nationalism.

Why do people keep referring the Liberal in Classical Liberal to mean ‘Libertine’ instead of ‘Liberty’? And the word ‘Progressive’. What about it is forward thinking and innovative when the result always regresses back to the economic and social model of the dark ages?

When you allow political hucksters to abduct the language and swap out their original meaning, you contribute to the fog of war and dull the ability of words to judge what is good from evil.

Sounds like a kooky notion, I know, but that’s how I see it.