Ted Cruz: Simplify tax code to abolish IRS as we know it

Ted Cruz: Simplify tax code to abolish IRS as we know it 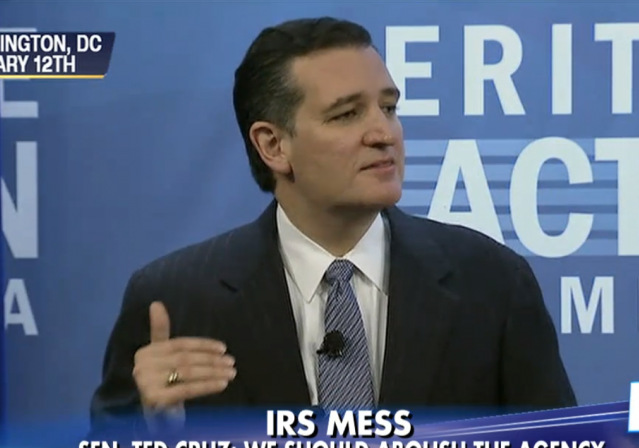 Why fix what you can abolish?

The scandal-laden IRS has found itself a new adversary in Senator Cruz.

Last week, Senator Cruz called for abolishing the IRS while joking that sending the agencies 110,000 employees to the Southern border was a better use of their time.

Sen. Ted Cruz (R-TX) emphatically denounced the IRS this week in a Heritage Foundation speech, saying that that the agency doesn’t need to be reformed, it needs to be “abolished.”

Now that Republicans control Congress, Cruz said the party must seize on the opportunity to simplify the tax code and make it fairer.

“The last two years have fundamentally changed the dynamics of this debate [on the tax code],” he said. “As we have seen the weaponization of the IRS, as we have seen the Obama administration using the IRS in a partisan manner to punish its political enemies.”

Cruz joked that the 110,000 employees of the IRS should be sent down to the southern border.

Overall, he called on Republicans to push a bold agenda before the 2016 election.

Abolishing the IRS is probably over ambitious, although its abolishment would be a dream come true to those who will be dinged with the Obamacare penalty this year. Hopefully, the GOP will find some ways, even if only incrementally, to push for actual tax reform, not just the rhetorical “give a tax break to a minute group so we can say we reduced taxes” kinda deal.

Reform, root and branch. Burn the tax code, and start with a clean sheet of paper…

AFTER repealing the 16th.

Repeal takes the same 2/3 of Congress and 34 of states that the Amendment required in the first place. If we could do that, might as well get rid of the 17th, too. All the “progressive” Amendments were damaging to the Republic.

While we’re at it, we might want to have a little chat about the 19th, too.

We are not going to amend the Constitution any time soon. We can, however, de-weaponize the IRS, and that is exactly how I would place it.

The Republican position should be that the power inherent in the IRS has been abused, resulting in unequal application of the law, and therefore certain agency activities and positions must be curtailed or changed. Charging off after a non-starter, which is what a Constitutional amendment is, in the short run, is radical and unnecessary because we have too many administrative and political remedies available.

Article V convention folks have other ideas about the timing of amending the Constitution. However, hit the IRS from all sides at all times with all available tools.

On the politics of this, who else sees Cruz making a play for Paul’s libertarian block?

Who this “we” you talk about, pastel-colored woman…???

Ragspierre
You rock man.
“Who this “we” you talk about, pastel-colored woman…???”

The 16th amendment allows the income tax, it doesn’t mandate one, so neutering the IRS would be simple if Boehner and McConnell weren’t

Idiot. Your solution to every problem is to shut down the government.

Even a plurality of Republicans oppose that. Maybe you could sell the idea if you had a part two to your “strategy,” but you don’t.

Of course they oppose it. Who wants to butcher the Washington DC cash cow?

” … called for abolishing the IRS while joking that sending the agencies 110,000 employees to the Southern border was a better use of their time…”

The Institutional Republicans want us to be satisfied with “this is not the hill to fight on”. Conservatives want to take the fight to the enemy.

I would not be surprised if the Institutionals put a contract out on Ted Cruz.

“Abolishing the IRS is probably over ambitious”

Let me teach you something about politics. It goes something like this:

1. Call for abolition of the IRS and a total rewrite of the tax code.

2. Work behind the scenes to get people on board. They complain. McConnell tries to derail the whole thing because he LIKES having a bloated and corrupt system.

3. Introduce a bill that is more to the liking of the conference, one that reduces the IRS and eliminates some vast portion of the tax code. Fight hard for it.

4. The bill goes down in flames or maybe passes and Obama vetoes it. Same difference.

5. Then, campaign for president as an outsider who dislikes the IRS as much as anybody (and, by the way, all my opponents came out against reform and the IRS won that round).

6. Win the presidency in a landslide. Conservatives even more energized than they were in 2014!

7. Attack the IRS again, this time from a position of strength.

Cruz thinks the way Americans think. He’s fed up with the status quo and the majority of Americans are fed up with it to. Here’s some other suggestions from Cruz for your enjoyment.

They keep talking about the tax “code”
Code: a system of words, letters, figures, or other symbols substituted for other words, letters, etc., especially for the purposes of secrecy.
They need to give us a decoder ring or get rid of the “code”.

Finally, a politician that stands up for the people.

Here’s a Populist for you.

Communists like Fauxcahontas Warren and Barry Obama are as anti-American as anyone could possibly be. The last people that would be helped by their policies are average workers. So, why do they get tagged as “populists” when they are anything but?

I thumbed you up just for Fauxcahontas.

Real tax reform and simplification could enable us to reduce the IRS to a fraction of its current size, and would be a free economic stimulus greater than any feasible tax cut.

Do it for individuals AND companies. Flat tax on income, the only deduction is the cost of doing business. Instant depreciation for capital investment, no more depreciation schedules.

Then watch the economy grow.

Stop the culture of corruption