One chapter in the saga of Stanley Cohen has closed, another started.

Cohen was to report today to prison to begin serving his 18 month sentence, the result of a plea bargain, for concealing and failing to report large cash transactions and failing to file income tax returns for several years.

Cohen pledged during his criminal case that he would rather serve 18 months than dine with a Zionist. 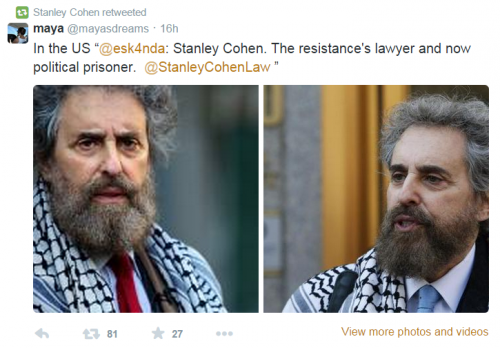 On January 5, 2015, Cohen issued a statement via Twitter, ending with these words:

Pray for Palestine and Bless the Resistence. Up the Rebels everywhere. They cannot stop us. 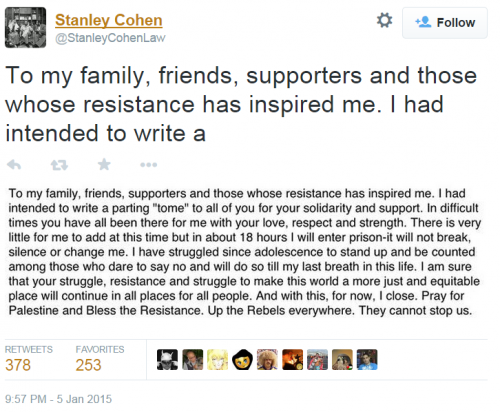 When he blesses the “Resistence,” he means Hamas, to whom he remains loyal as reflected in this recent Jewish Forward profile:

Meanwhile, Cohen’s own personal loyalties remain unabashedly with Hamas, a group designated by the United States and Israel as a terrorist organization.

The wisecracking attorney, who was raised in a moderately observant Jewish family in Westchester County, New York, today describes himself as an atheist and an anarchist, but is still proudly Jewish culturally and socially. So, what exactly is the attraction for him of this violent, authoritarian, conservative religion-focused, sexist and anti-gay group with a founding charter widely denounced as anti-Semitic — whatever he thinks of Israel?

Dismissing this question as one “worthy of Likud,” Cohen replied: “Does Hamas have strong religious ties? Yes. Is it a group that believes in Islamic tenets? Yes.” But first and foremost, he stressed: “I see Hamas as fundamentally a national liberation movement. I see their progressive work and their social services in the Palestinian population.”

Though he used to see “winning Israeli hearts and minds” as a prime task to end the occupation, Cohen said, the events of the past year or two have disabused him of that.

“I’ll take [Hamas’s] politics any day over a Tel Aviv leftist who sees marching in a gay pride parade as the political event of the year,” he said.

Jessica Shulberg at The New Republic has an excellent profile of Cohen, for which I was interviewed.  The title plays off of Cohen’s mocking self-description,  Today, the “World’s Number One Self-Hating Jew” Goes to Jail:

Not everyone is buying Cohen’s grandiose claims of political persecution. William Jacobson, a clinical professor at Cornell Law and blogger at Legal Insurrection, recently wrote, “The evidence [of tax evasion] was overwhelming, to put it mildly. When Cohen entered his plea last April, he admitted that the government could prove its case.”

After Cohen was denied further delay in his sentencing, he tweeted that the “judge denies it hour before he receives governments answer.”

“Must be more of that Zionist conspiracy,” Jacobson wrote.

Cohen also left for prison with the image of two Hamas founders and leaders, both killed by the Israelis, Sheik Ahmed Yassin and Ismail Abu Shanab. [See featured image taken from Cohen’s Twitter account and website.]

So what’s next for Stanley Cohen?

He’ll try to rehabilitate his law license, and go back to being “Hamas’ lawyer.”

There’s a petition for him to be pardoned. Who knows?

What a sad rodent.

In the top pic, I can’t tell who is NOT a child murdering terrorist.

For once I find myself in agreement with this twit: “Up the rebels, everywhere!” I would personally recommend an AR-10 or an AR-15 using 300 Blackout rounds, but any round will really work. Blades are good too!

Why is it that so many of these hyper-educated people are complete idiots?

A worthy thought. To the extent I pray, I pray that Palestine will revolt against the madness that Cohen embodies, that they string up all like Cohen from lampposts, and give their children the gift of rationality and the pursuit of peace.

“To the extent I pray, I pray that Palestine will revolt against the madness that Cohen embodies, that they string up all like Cohen from lampposts, and give their children the gift of rationality and the pursuit of peace.”

These items are great ideas. But they’re off the table, as is the environmentally unsound lump of coal Cohen deserves. Instead maybe we can hope that Cohen serves his sentence as a peaceful, cooperative, non-inflammatory cautionary tale.

Yeah, I know, bwaaaahhhaahhhaah. One may always hope, though.

Little do Prison Muslims know that he’s a plant to gather inside info.
*shhhhhhh* don’t tell anybody

Wow, does anyone else know about this? Just wow! Maybe we need to keep quiet about this, eh?

I hope this doesn’t get posted all over Twitter.

May he drop the soap in the shower daily – after the water is turned off.

Cohen probably wanted desperately to be a big fish in a small pond. Even a terrorist pond.

“Political prisoner” — lol. Him and Shatansky.

If he would rather spend 18 months in prison than dine with a Zionist, maybe they should find a Zionist for his cellmate.

Maybe if he made a video that the administration claimed started an attack on an American consulate, he’d be a political prisoner… Otherwise, he’s just an anti-Semite.

Is there any way Congress could prevent Obama from pardoning this scoundrel? You can bet he wants to.

a zionist would never invite him to dine, nor would any other civilized person.