Face-off over language and political correctness. 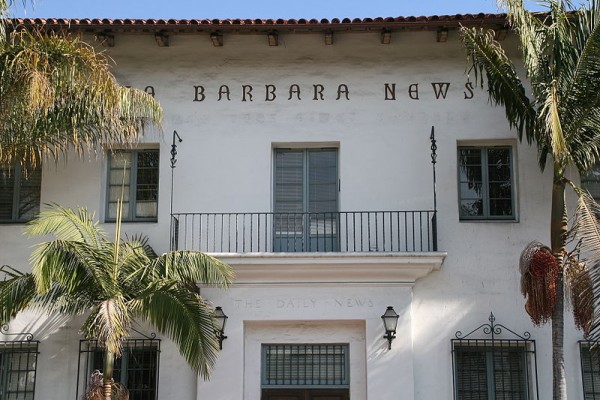 Just when you may have given up entirely on the Golden State, news comes about a newspaper in one of the deepest blue enclaves fighting political correctness.

A California newspaper will continue to use the term “illegals” to describe people who enter the U.S. without permission, despite an attack on its building by vandals believed to object to the term.

The Santa Barbara News-Press’s front entrance was sprayed with the message “The border is illegal, not the people who cross it” in red paint, sometime either Wednesday night or early Thursday, according to the newspaper’s director of operations, Donald Katich. The attack came amid wider objections to a News-Press headline that used the word “illegals” alongside a story on California granting driver’s licenses to people in the country illegally.

….In addition to the writing on the building, graffiti espousing a no-borders mentality was scribbled on the walkway through Storke Placita and the sidewalk near Santa Barbara City Hall. Police were braced for a protest in front of the paper later this week. Jan said hundreds could show up, and the Police Department is aware of the call for a protest.

Here’s is some of the Times’s coverage the ensuing protests and counter-protests, which occurred on Jan. 19, the deadline the paper was given to publish a retraction.

The News-Press ran the headline “Illegals Line Up for Driver’s Licenses” on Jan. 3, prompting protests and a message painted in red on the wall of the newspaper’s offices. The paper used the term again last Friday in another front page story: “Driving Legal Opens Door to Illegals’ Past.”

News-Press officials have stuck by their choice of language, saying that describing someone living in the country illegally as an “illegal” is accurate, and compared the vandalism on their offices to the deadly attack on the Charlie Hebdo magazine in Paris.

“We will not give in to the thugs who are attempting to use political correctness as a tool of censorship and a weapon to shut down this newspaper,” News-Press co-publisher Arthur von Wiesenberger wrote on the website of the Minuteman Project, which opposes illegal immigration.

…Using the Martin Luther King Jr. holiday as a backdrop for their positions framed as human rights and freedom of speech issues, one side argued that the headline was racist and the other argued that it was an accurate description of immigrants applying for driver’s licenses without having to prove citizenship. The licenses became available under a state law that took effect Jan. 1.

See, the Times even had to violate its own style guide to cover the story!

The Latino Rebel captures some images of Californians protesting….in support of the paper.

#teaparty protestors defend use of the term "illegals" in front of #santabarbara News-Press right now pic.twitter.com/Cz9mG36Mn6

The following video captures the robust discussion the “open borders” believers had with those with an opposing view.

And they keep telling me Tea Party is dead! It is good to see one California publication not falling victim to self-appointed language police.

That’s why they’ll do everything they can to stop the paper from saying it.

How dare that newspaper’s management think that it is free to print the truth!

The media has only themselves to blame. They come out in favor of and in some cases demanding censorship of language that offends muslim fanatics so those fanatics don’t kill people. So now illegals are using the same tactics as the Islamic radicals. Shocker.

The media has sown the wind and they will now reap the whirlwind.

Islam, the “Religion of Peace”, has its terrorists and gangs that enforce Sharia law, even in Western societies.

Collectivism, the “Religion of PC”, has its knee-cappers, eco-terrorists, Lois Lerners and Eric Holders, enforcing political correctness in our institutions, and imposing it on our private affairs.

The invasive gangs from Mexico are illegals, and those Mexicans demanding more and more American rights must be confronted, before half of LA becomes a “no go zone”. California has yielded large areas to illegals, where a gray market economy goes on as they collect benefits from the citizens of the state, but manage to send $30 Billion a year back south of the border.

VDH has many good articles on our plight.

To suggest that Mexico exports human capital in lieu of engaging in social reform, to suggest that indigenous peoples are the most likely to want to leave Mexico’s often racist social stratification, to suggest that Mexico does not care that its own expatriates suffer and scrimp to send back billions of dollars in cash to those ignored by the Mexican government, to suggest that Mexico appreciates that its citizens are more likely to cheer their homeland the longer they are away from it — all of this is considered reactionary and perhaps racist or at least culturally biased. But it is also absolutely true: Mexico, not the U.S., is the illiberal player in this entire sordid trafficking in human capital.

Mexico and American employers are not the only cynics in this drama. The La Raza elite understands well that …

Somehow, we have created an absurd situation in which a resident of Oaxaca, often fleeing racial and class oppression in Mexico, becomes defined as a victim of American pathologies the nanosecond he crosses the border.

Boundaries are a necessary part of life. Vandals broke the local laws and the boundaries put in place by members of their community. Lawlessness at a local level does not mean lawlessness is OK at the border.

Here’s a reaffirmation of the rule of law for IL’s “special interest” Rep. Luis Gutierrez:
“Illegals” are those who have crossed the U.S. border illegally, just as Islamists who use terrorism in the name of Allah are “radicalized Islamic terrorists.” No más, ningún menos.

Refusing to recognize our borders constitutes an act of war against the United States.

Je suis Charlie? Probably not. This expression exposes the hypocrisy of liberal society.

That said, instead of demanding corruption of America, they could demand addressing corruption in the second and third-world nations that export their unwanted men, women, and children. The conditions for people left behind do not improve with their emigration.

I call them wetbacks, just as was common in the 50’s and 60’s when they waded across the Rio Grande to join the legal Braceros in the fields. The difference now is that they intend to stay. The Braceros and the wetbacks of yore were happy to work the harvest and then return to their families in Mexico.

Just so we’re clear, “wetback” has nothing to do with crossing a river.

It’s a physical laborer of any race, although it is often used as a derogatory and racist term towards Mexicans…I couldn’t tell for sure if you knew that from your post.

Were you around back then? I was. He is right.