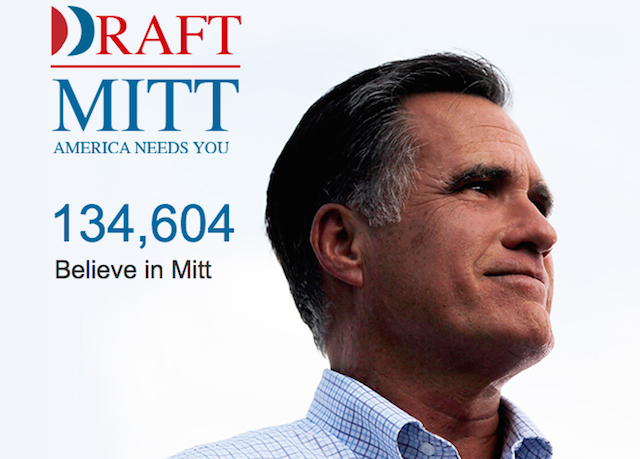 Romney dropped the news on supporters and staff this morning over the course of two conference calls, reaffirming past statements about the 2012 presidential campaign being his last.

In a second call to a larger group of supporters, Mr. Romney said, “After putting considerable thought into making another run for president, I’ve decided it is best to give other leaders in the party the opportunity to become our next nominee.”

Mr. Romney said he believed he could win the nomination, but he expressed concern about harming the party’s chances to retake the White House. “I did not want to make it more difficult for someone else to emerge who may have a better chance of becoming the president,” he said.

He added that it was “unlikely” that he would change his mind.

Mr. Romney, who did not take questions and ended the call shortly after reading a prepared statement, said that his family had been gratified by the outpouring of support, but had decided that it was best for the Republican Party to step aside. Mr. Romney said he would have no leadership PAC and no exploratory committee.

(I’m going to go out on a limb and suggest that this whole turn of events suggests that Bush didn’t actually “steal” one of Romney’s top advisors.)

Romney’s announcement back in January that he was seriously considering another bid for the presidency threw campaign wonks for a loop, and had much of the right-leaning sphere begging for mercy.

I still feel what I felt earlier this month—Mitt Romney needs to go down in history as the guy who deserved to be President. The man has been vindicated time and again via the foibles and failures of the Obama Administration—and the right still isn’t willing to coalesce around him.

Mitt Romney read the writing on the wall, and made the right decision.

Will he retire from the public eye? Maybe, but maybe not…

The hype and hoopla leading up to not running suggests Romney wants to crown a not-Bush nominee. Probably Christie.

Christie cannot get the nomination. One word: guns.

In a just world, anyway.

But thank you Mitt for stopping the Jeb steamroller.

The way for Romney to impede Jeb is to stay in the race and divide the Squish Vote.

“The man has been vindicated time and again via the foibles and failures of the Obama Administration—and the right still isn’t willing to coalesce around him.”

More anti-conservative jabs from Ms. Miller. Yeesh. Half the GOP 2012 nomination candidates, half the blogosphere, and two-thirds of the commenters on Legal Insurrection made the same predictions and were likewise ‘vindicated’. Given Obama, it wasn’t exactly rocket surgery. Are we all good candidates for the presidency? Is that all it takes?

You beat me to the punch. Well over half if not all the Republican candidates in 2012 were expressing thoughts similar to what Mitt said in 2012.

Mitt is now properly placing the country before his ego, acknowledging that his time has passed.

Romney…whatever you think of his policies…is a class guy with real principles he DOES live by. Compare and contrast to LOTS of people.

Romney has stuff of offer America. Not in the presidency, but almost certainly in a cabinet post.

Yes, agreed, a good guy. But not for president.

I am breathing a sigh of relief…that there’s one less GOP consultant-driven candidate complicating the field.

This considering what my little grassroots group did for him in 2012.
https://www.youtube.com/watch?v=RC2gY0PUC78

My respect for Mitt just went up a few notches. A true patriot.