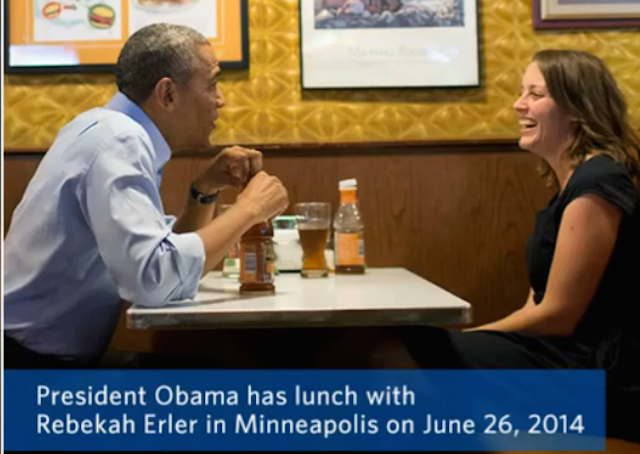 Remember Rebekah Erler, President Obama’s premiere “everywoman” success story from last night’s State of the Union address? The one whose family inspired the leader of the free world to stand up for the common man by…raising their taxes, or something?

As it turns out, Rebekah isn’t just an inspiration. She’s an operative.

Rebekah has been used before by the White House to tout its controversial fiscal policies. Last summer, President Obama spent a well-publicized day with her, taking in “real America” and picking up talking points about the excessively nice people up in Minnesota.

Though all of this, the White House failed to mention one important detail: Rebekah is a former Democratic campaign operative. She worked for Senator Patty Murray (D-WA) as a field organizer.

According to the Washington Free Beacon, Reuter’s revealed Erler’s affiliations after her day spent with Obama; Republicans fought back, accusing Obama of being out of touch with average Minnesotans.

The real scandal here isn’t that the White House fabricated a success story; that’s old news. The scandal is that internationally-read publications have revealed this woman’s affiliations and bias, and the White House trotted her out anyway.

They really don’t care, do they?

Forget all that messy political nonsense, and the whole story comes together, tied up with pretty bow and ready to tug at the heartstrings of those who don’t spend 12 hours a day tumbling around in the media spin cycle:

Seven years ago, Rebekah and Ben Erler of Minneapolis were newlyweds. She waited tables. He worked construction. Their first child, Jack, was on the way.

They were young and in love in America, and it doesn’t get much better than that.

“If only we had known,” Rebekah wrote to me last spring, “what was about to happen to the housing and construction market.”

As the crisis worsened, Ben’s business dried up, so he took what jobs he could find, even if they kept him on the road for long stretches of time. Rebekah took out student loans, enrolled in community college, and retrained for a new career. They sacrificed for each other. And slowly, it paid off. They bought their first home. They had a second son, Henry. Rebekah got a better job, and then a raise. Ben is back in construction – and home for dinner every night.

“It is amazing,” Rebekah wrote, “what you can bounce back from when you have to…we are a strong, tight-knit family who has made it through some very, very hard times.”

America, Rebekah and Ben’s story is our story.

Great photo. Two people yukking up the joy of destroying America. All smiles.

if you don’t have any evidence, just fabricate some.

after all, it’s w*rked with global warming…

Rush this am wondered why they didn’t use one of the millions of genuine success stories that must certainly be out there, given how they claim the economy is surging and the recession well over. They had to make one up? lol

What happened to Julia? Dumped by Hope and Change?

Julia’s in line at Planned Parenthood for birth control pills or an abortion …. I can’t recall.

I was wondering about Julia or else maybe that fake rape girl (who molested her baby sister) who wanted Obama to be her first, or else the other “10” at 2:00am chick who wanted me to buy her birth control.

The Collective has legions of kudzu…

invasive plants that crawl all over everything.

Rebekah – you’re a damn fool. A good looking fool, but a fool nevertheless.

You need to get out more if you think she’s anything above average.

A fraud. Just like ‘Barack Hussein Obama,’ or whoever the hell he really is.

Time to get out the Photoshop and put a potted plant in that photo.