Making it easier for Mexicans illegally in U.S. to take advantage of new federal and state legalization programs. 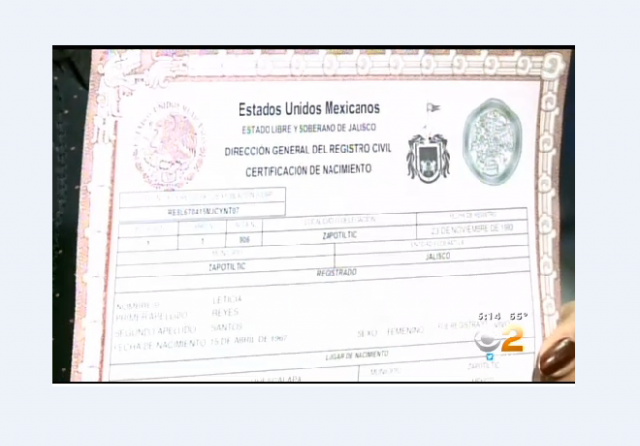 The ink hasn’t even dried on the House bill on immigration reform, and already there is a significant new challenge to address, one which seems designed to help implement Obama’s new immigration status plan.

The development hasn’t come from the White House, but from Mexico, which has just started issuing birth certificates to its citizens at consulates throughout this country.

The Mexican government on Thursday will start issuing birth certificates to its citizens at consulates in the United States, seeking to make it easier for them to apply for US work permits, driver’s licenses and protection from deportation.

Until now, Mexico has required citizens to get birth certificates at government offices in Mexico. Many of those living in the US ask friends and relatives back home to retrieve them, which can delay their applications for immigration or other programs.

The reason for the new policy? It makes it more convenient for Mexico to deal with poverty and unemployment in its own country.

Mexico is trying to help millions of immigrants living illegally in the U.S. apply for programs that would allow them to remain temporarily in the country and continue sending money to relatives across the border, despite Republicans in Congress trying to quash President Obama’s immigration reform plan.

“It is a huge help. It helps individuals really begin to formulate their formal identity in this country,” said Angelica Salas, executive director of the Coalition for Humane Immigrant Rights of Los Angeles.

About half of the 11 million immigrants living in the United States illegally are from Mexico, and immigration experts estimate that roughly 3 million Mexicans could be eligible to apply for work permits and protection from deportation under the administration’s plan.

Formulating that new identity is going to be even easier, thanks in part to California!

Mexican immigrant Jesus Moreno emerged smiling from a California Department of Motor Vehicles office on Friday with official permission to do something he’s been doing here for more than a decade: driving.

The 30-year-old vending-machine installer, who has forked over hundreds of dollars in traffic tickets and car-impound fees as an unlicensed driver, became one of the first to get a permit under a new program to give driver’s licenses to the nation’s largest population of immigrants in the country illegally.

“It’s not that I want to drive,” said Moreno, after leaving a packed DMV office in Orange County. “It’s a necessity.”

Thousands of people crammed into DMV offices and waited in hours-long lines to apply for a license as California became one of 10 states to authorize immigrants in the country illegally to drive.

Now before you start picking on my home state, Colorado, Connecticut, the District of Columbia, Illinois, Maryland, Nevada, New Mexico, Utah, Vermont, and Washington have all implemented similar programs.

And how is this new policy going to help the average American? I suspect it won’t, especially since there has been a significant rise in jobless claims.

The number of Americans filing new claims for unemployment benefits last week increased to the highest level since early September, but the underlying trend continued to point to a strengthening labor market.

Initial claims for state unemployment benefits rose by 19,000 to a seasonally adjusted 316,000 for the week ended Jan. 10, the Labor Department said on Thursday.

But certainly this will inspire the US Senate to pick up the baton the House just passed!

A House Republican plan to defeat Barack Obama on immigration by tying the issue to counter-terrorism spending showed signs of stalling on Thursday, as Senate Republicans hesitated to back the strategy and a lethal anti-terror raid in Belgium underscored security concerns.

Neo-neocon recently pondered if the new Congress would have stomach to thwart the Obama administration’s immigration scheme. It looks like not only does it lack the stomach, but a heart and spine as well.

Welp, it is time for Congress to DEFUND Mexico.

And I’m not kidding in the least. Take them off the payroll.

The arch conservative John Boehner will dime McConnell in the Senate and get this thing straightened out pronto. He’s GOP and they promised.

Just more of Obama’s wealth re-distribution: from the pockets of struggling middle-class Americans (who will see all sorts of tax hikes, local, state, and federal, to pay for all the benefits for the new amnestees),and into the pockets of Mexico’s elites.

How is Obama’s version of “social justice” working out for you so far, America?

Will the Mexican consulate just take your word for it? A Mexican birth certificate might be useful from time to time.

There’s not a smidgen of a chance that this process will be abused. NOT A SMIDGEN.

Well, now we can issue arrest warrants for trespassing.

The problem is both legal and illegal immigration that exceeds the rate of assimilation and integration. As well as immigrants who demonstrate a lack of interest to do either and are actively disruptive. The problem is also a perverse incentive offered by the government to abort Americans by the millions.

The government’s compelling interest is to secure taxable assets and reduce the problem set. The Party’s compelling interest is to marginalize and neutralize its competitors, including through normalization of abortion for pleasure (e.g. money), but also through subsidizing strategic distribution of people in order to secure democratic leverage. It’s telling when immigrants enjoy a better quality of life than Americans, who are indigent, homeless, and even unidentified.

That said, I can see overlapping interests that have sustained this global corruption. Not the least of which is Obama’s Dream.

I’m willing to bet for fifty bucks you can get whatever name and birthday you want on that certificate.

How long until underage drinkers figure out that they can get a Mexican birth certificate showing that they’re 21, then use that BC to get a driver’s license/photo ID in any of the states which hand out DLs to illegals, and then…
…
…
PROFIT!

Define “illegally”. Serious question. Sovereignty involves control over who comes and goes across borders in accordance with the laws of the national government. In the absence of any control over movement at borders, how can a nation be considered sovereign in its own territory?

What de facto control does the government of the entity known as the United States of America have over movement across its purported borders? Functionally none.

In the absence of that control of borders, how sovereign is that government inside its purported borders, when literally millions of foreign invaders live outside the laws inside those borders with absolutely no fear of repercussions?

Therefore, if the law has no de facto reality, how can they be illegal?

As a bonus question for discussion, if the government of the United States has voluntarily de facto renounced its sovereignty, other than the application of coercive force; what basis is there for mandating that anyone within the borders of the United States obey its purported laws, regulations, presidential decrees?