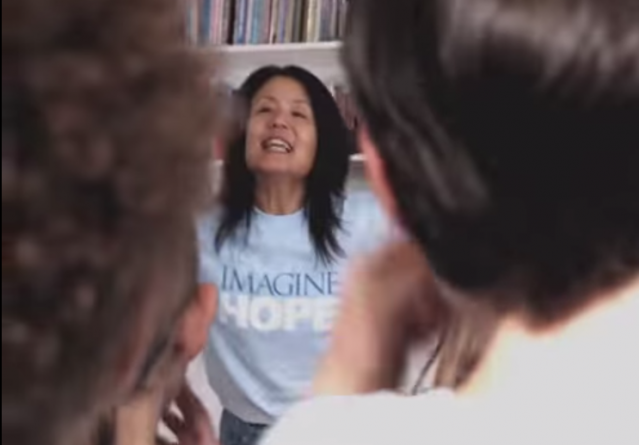 I have posted this video several times in the past.

It’s like some artifact from a long-ago time when madness swept the nation.

Can you please post a trigger warning and serve air-sickness bags with that video. Thanking you in advance.

My oldest son was in kindergarten when Obama was inaugurated.

Most of his school voted for Obama in their pretend election.

How I dealt with it was to sit down and do the math with my son. I showed him how much money the country owed and where it was headed with increased spending.

Today, after several years of huge deficits leading to us being $18 trillion in debt, it is real easy to convince him how bankrupt the progressives are.

This video always creeps me out!

It reminds me of the singing Hitler Youth scene from the movie “Cabaret” !!

Watch the video linked to below and it becomes obvious why this video always creeps me out!

I’d say they were the same, but the German version is much better, just as music. But you’re right, they’re equally frightening.

Watch the video linked to below and it becomes obvious why this video is scary!

People go mad from time to time, but the important thing is that we still have our constitutional system and capitalist economy. We didn’t close newspapers or open gulags. Yes, there are executive orders, IRS scandals and all that, but America is still America.

But it wont’ be if the GOP leadership remains as corrupted as it has become. The only “America” left will be for the president, members of Congress and one auto union — just like in Obamacare.

Sell-outs like Boehner and McConnell and McCain aren’t phased in the least by these videos — just so long as they keep getting invited to the right parties.

And who says ‘madness’ has stopped sweeping the nation? It’s only beginning. We have 2 years remaining of America’s #1 boy-madman, and he is the most powerful human in the world.

If the recent event of Obama forcing a military wedding on a gold course to move away so he could ‘play through’ doesn’t shine light on people just who this corrupt, narcissistic lunatic truly is, nothing will, until it is too late.

We don’t have to close newspapers; the internet is doing that job quite well. BUT, have you noticed what the administration is trying to do under the guise of “Net Neutrality?” If they succeed it will have the same effect.

Our capitalist economy? Talk to any small business owner about the regulations, taxes, fees – and let’s not forget the ACA! – and you’ll discover that what we can see is the ghost of capitalism, and it’s fading fast.

As for gulags – give it a little time. We have a fine facility at Guantanamo Bay you’ll recall.

I agree with both both of you about steady erosion of civil liberties. However, as long as we have 2A there will be no gulags.

This video, along with others like it from East Coast public schools, was enough to make me nauseous. Then there were others like the one of the young Black Students who pledged to do good works for Obama!

E gads, what potential this oaf had; all wasted. Instead, he used it to achieve his one goal, the diminution of the US.

Obama’s presidential elections remain a colossus stain on the moral soul of the US.

My God Forgive the US for twice electing this soulless popinjay, this Stalin in disguise, to national office.

Cute sky-blue T-shirts with a borrowed word IMAGINE (from everyone’s beloved John Lennon) should make this not at all like youth dressed in dark green military jackets. Right? WRONG. It’s the same brainwashing led by a zealous leader. Right out of Hitler’s manual on
trainng the youth.

Looks and sounds like something out of North Korea.