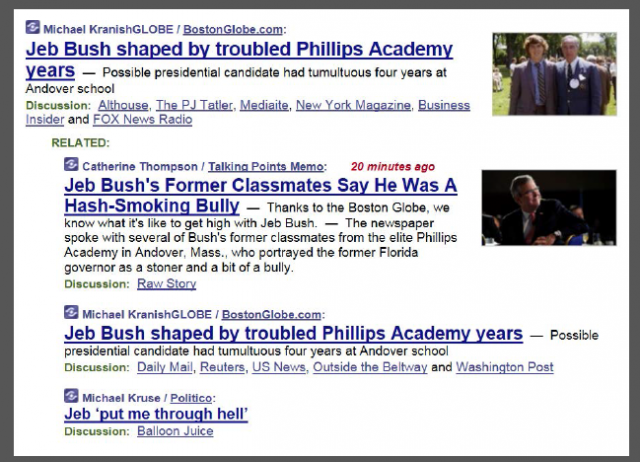 They did it to Mitt Romney. 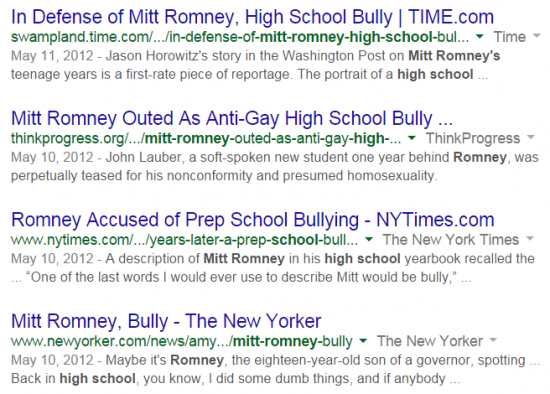 Now they are doing it to Jeb Bush.

Those who showed no interest in and tried to shut down as “racist” all inquiry into Barack Obama’s childhood, high school, college, law school and Reverend Wright years all of the sudden get very interested in what a Republican candidate did in high school.

And by the way, where is Obama’s Rashid Khalidi tape, L.A. Times?

Leave it to the media to get me defending Jeb Bush.

I am not going to defend a pro-Common Core, pro-Amnesty, pro-Big Government, GOPe endorsed Republican against anybody. ‘Us vs Them’ doesn’t work for those of us who want neither ‘Us’ nor ‘Them’.

There is a name for “Conservative” posters like that. It is “Democrat.”

Wrong. It is Democrat collaborator.

I don’t like Jeb Bush so much either, but I agree with the good Professor. If it comes to it I will vote for him over another bloodsucking enemy of American values like obozo.
Staying at home is not a choice.

All the petulant children who stayed home in 2012 are why Obama got another 4 years to wreck this country. I’m over them.

cried Lucy to Charlie when he refused to ‘kick’ the football anymore and kicked her instead. I am with Charlie; Lucy needed her ass kicked.

And so do you.

You’re not kicking Lucy, you’re kicking yourself and everyone else. Not voting for a Republican means giving half a vote to the Democrat. If the D candidate is someone you can live with, that can be a valid option. In my opinion the last time that has happened on the presidential level was 1996. I have no regret for not voting for Dole, because I honestly don’t believe he would have been any better than Clinton. But it is obvious that Gore and Kerry would have been far worse presidents than W Bush, and that 0bama has been far worse than McCain or Romney could possibly have been. And it’s almost certain that whomever the Rs nominate in 2016, however bad, will be infinitely preferable to whichever horror the Ds put up.

Or go third party. There isn’t that much difference between Jeb and the Democrats.

Voting third party is a way to send a message to the main two parties, but unless the third party ends up winning the election, nothing is really accomplished.
A few thousand Americans will vote for a third party, but the power to rule will stay in the hands of either the elephant or the ass.

…and then before leaving the podium he would promptly suggest Hillary and Chelsea, Pelosi, Reid, and the Obama all do (not promise, DO!) or he’d promptly announce his run as soon as they do!

Conservatives respect individual dignity. This is why we don’t fight, among other things, class wars for their own sake. Jeb Bush should be judged on his own merits.

What the $%$% is wrong with a dynasty? If someone happens to be the best choice for president, how can it be a bad thing that his father and brother were also presidents? Should a candidate for Congress or Governor also not be elected because other family members have held elected office?! On the contrary, it stands to reason that talent runs in a family. (Though perhaps not this family…)

Had Reagan selected someone other than George HW Bush as his running mate, he would have saved the country a lot of misery.

If the “media” (Democrat operatives masquerading as journalists)did even one minute of real research here, that is one minute more than they have ever done on Obama.

See how easy it is to get our classically trained professional journalists with the highest ethical standards back to doing their job.

At least with Andrew Sullivan gone, we will not have to hear about Jeb’s vagina.

I will not vote for Jeb Bush. He IS a liberal, no different than the filthy ilk we have now.

You know…. kind of a tongue in cheek interview.

How about working hard to get Republicans excited about a governor who survived 3 recalls in a Blue State to win the nomination instead of a dynasty who pays lips service to First Principles?

Let Jeb Bush divert the liberal media fire away from the other candidates.

Such a feeble attack doesn’t warrant any defense. Anyone who would take such stories seriously is lost anyway.

There’s no way I want Jeb anywhere near the nomination. There is no way I’d ever vote for him, except I would vote for him in the general election over anyone the Democrats nominate. As bad as he is, he is by half (or more) better than any of their candidates. If you don’t believe that, simply consider the prospect of Supreme Court appointments.

If the choice comes down to a candidate that supports Obamacare [and until a few weeks ago sat on the board of a company whose income comes from designing and operating Obamacare exchanges], who is anti-2nd Amendment [and who until a few weeks ago was on the board of the Bloomberg Foundation that funds anti-gun legislation], who is extremely pro-Common Core which will give our kids’ education to Federal bureaucrats, and who is all for Amnesty and Permanent Open Borders -v- Hillary Clinton or Elizabeth Warren; where is the choice?

Especially when you couple that with a Republican Party in both Houses that has reversed itself on every promise made to its voters during the election and from November 5 has worked to preserve, protect, and defend all of Obama’s policies.

Where is the advantage to either conservatives or the country in electing Jeb Bush and the Republicans? We have evidence that both will use the power of the Federal government to enforce Democrat policies against the will of the people.

There is not a bloody thing I can do to affect the Democrats. I can at least put a hurt on the Republicans who are now, and have for years been, betraying me. If only be withholding my vote.