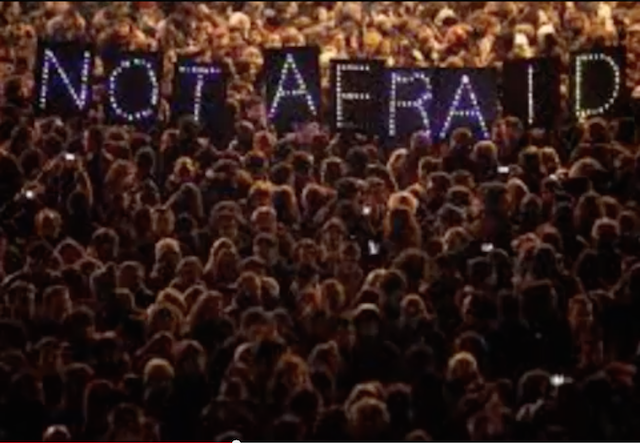 The terrorists who attacked Charlie Hebdo and the Hyper Casher Kosher supermarket this past week most likely believed that their actions would silence a satirical publication and its readers, and tear people of different religions apart.

Instead, their brutal actions awoke a nation and in turn, the world:

More than 100,000 people gathered in cities around France as night fell to pay tribute to the 12 people gunned down in an attack against the Charlie Hebdo satirical weekly on Wednesday.

In Paris tens of thousands more gathered at Republique square, not far from where the attack took place, police said. Officials in cities such as Marseille, Toulouse and Lyon also reported thousands gathering in public spaces on the country’s darkest day in decades.

Demonstrators wore black stickers marked “Je suis Charlie” (I am Charlie), a slogan aimed at showing solidarity with the victims of the deadliest attack in France in decades.

In a somber address to the nation, Hollande pledged to hunt down the killers and urged the country to come together after the tragedy.

The terror attacks have inspired songs and artwork, and the “#JeSuisCharlie” hashtag has gone viral.

Lot of #JeSuisCharlie today in rueil today !!! Well done @villederueil ! You can be proud! pic.twitter.com/32u4uCYlbP

"They wanted to bring France to her knees, instead, she stood up." #JeSuisCharlie pic.twitter.com/wZDrPRxXOF

Outside of France, citizens rally online and in the streets in solidarity with Charlie Hebdo:

#JeSuisCharlie 1 of the most popular hashtags ever (3.4M tweets in 24 hrs) Here's the @twitter heatmap via @Telegraph pic.twitter.com/65BZenXSqy

A woman holds a sign reading 'Yo soy Charlie' (I am Charlie) in Santo Domingo City, Dominican Republic pic.twitter.com/xC9gxwLqJe

Tomorrow, millions are expected to rally in Paris in support of the victims of the Charlie Hebdo massacre, free speech, and a free press. We’ll be providing live coverage tomorrow starting at 9 am ET, as well as coverage of rallies in Washington, DC and around the world.

“Let us unite . . . .”
Sure, Hollande: These events will make all Frenchmen and women want to embrace your multi-cultural claptrap.

This is all encouraging.

But what would be even more encouraging, is if this were a world wide reaction against Islamic terrorism….by Muslims.

Unfortunately, it doesn’t matter much as they are all still disarmed.

…therefore the government doesn’t have to listen to those naive little people, and won’t. It’s a perfect example of why our 2nd Amendment is actually the first in importance when it comes to protecting life, liberty, and the pursuit of happiness.

Looks nice, but won’t change a thing. Would the panzers have stopped outside Paris if everyone came out and demonstrated? Won’t happen here either. And why is their sign in English?

Saw on Twitter a Rabbi from the Simon Wiesenthal Center said, “If not for the #CharlieHebdo massacre would the world have cared about the Jewish Grocery massacre?” Indeed.

The French protests, and others supporting them, are wonderful! Yet, reality is that in Germany, there were marches against those who were for the “Pegida” movement. The NYT says that it warns against Islamic-phobia, as does other MSM outlets.

So, what the Islamic terrorists did this week in France is terrible and that outcry against such behavior by Islam is wrong? We’re very close to be going down the rabbit hole and cohabiting with the Queen of Hearts. Well, what does the NYT really propose, surrender?

However, my view is that soon, perhaps, we’ll have to decide either to go full Dhimmi or go fully with LTC Peter’s point of view, which would be my preference in many ways. President al-Sisi has defined the issue very well, who else has the big brass ones to do that?

What they all know but are terrified to say (or admit) openly is that the vast majority of Muslims must be expelled.

A kid asked me and I had no answer.

There’s a big difference between denigrating people for immutable characteristics that are intrinsically harmless to others, and transgressing the constricting demands that Muslims aim to impose on all others when it comes to statements concerning their belief system.

Statements that “offend Muslims” are legion. Requiring everyone to honor every Muslim piety (and to keep silent about Islamic evil) is a more unreasonable demand than asking that people not make gratuitous racially disparaging comments.

I’m not entirely certain if that difference, philosophically, should make racial insults forbidden. But offending Muslims is more justifiable ethically when it focuses on the faults of the belief system (rather than on people who happened to be born into Islam), and when it’s a matter of violating unreasonable demands that everyone adhere to Islamic blasphemy codes and refrain from making factual statements that do not flatter Islam.

The fact that Muslims enforce their particular prohibitions against “offense” with murder is just one of many reasons why Islam deserves to be “insulted.” By contrast, people do not deserve to be deliberately offended over attributes they didn’t choose and cannot change.

The keystone cops appearance of the police assault on the grocery store is concerning. Most of them looked like they were extras on a Hollywood set, not a tactical assault team. What is with pouring 30 officers into the deli, not a small efficient team of 8? And no plan for screening the hostages? It makes me wonder about the veracity of that whole story. And if it is the truth, makes me very concerned for our safety given the apparent incompetence of LE. Which leads me to my point: if there are terror cells all over EU and especially in France, why would they miss an opportunity to attack a gathering of hundreds of thousands of people? Seems an ad hoc pressure cooker bomb (a la Boston) would have quite an impact . And if the terrorists don’t avail themselves of this opportunity, what do we conclude? do they really exist?

If hundreds of thousands of Parisians are truly “NOT AFRAID”, then why were the cartoonists at Charlie Hebdo the only ones willing to risk their lives by poking fun at Mohammad? Where were the legion of others who, too, were “NOT AFRAID”?

That’s not a plan. That’s not even a decent slogan.

They’ve let the barbarians inside the gates; now they don’t need to “unite’ with anybody, they need to go all Charles Martel on their enemies, and not just figuratively. Unless they realize that they have no other options, France as a recognizable part of Western civilization is finished. The exact schedule is uncertain, but the final score is not.

By now, several hundred (relatively) innocent French Muslims should have been beaten to death by mobs and several sections of major French cities have been torched. Then we could all go through the motions of deploring the violence … but it would at least show that there is something, some spark in the French population with a visceral will to survive, rather than just blather.

France as an entity just hasn’t been the same since the Battle of Verdun. Next year will be the centenary of that; they’ve been a long time a-dying, but a-dying they are. Verdun wasn’t France’s fault; but a huge chunk of the 20th century’s post-WW2 agonies was caused directly by France’s horribly bungled attempts to maintain its faux empire in Indochina and North Africa. Now some of those chickens are coming home to roost, and they’ll be cutting some heads off when they do.

While I can’t agree with your statement about what should have happened to “several hundred (relatively) innocent French Muslims,” I do have to conclude that the damage being done by the settlement of large numbers of Muslims in Europe (and other non-Muslim societies) is so catastrophic that it demands a much more vigorous response than we have seen anywhere in modern times.

At the least, causing some inconvenience and offense to “innocent Muslims” seems to be a necessary price for salvaging Western civilization (or civilization, period). Any Muslims who value Islam more than they value the virtues of the non-Islamic societies in which they live must be instructed that the two sets of values are not compatible and must be very strongly invited to move to a place where Islam rules.

Lots of protests after the Madrid train bombing in 2004. Nothing much changed. Euroweenies: long on symbolism, short on substance.

The purpose of a protest is to try to get a law or a practice changed, isn’t it? So who do these people think they will reach and impress and change by protesting?

The politicians are protesting along with the citizens, so are the pols also protesting their own laws that have permitted radical Islam to spread through France?

This is barely a step up from hashtagging. And meanwhile, Kurds and others outside of Europe are being slaughtered by the thousands by Islamists, a far worse tragedy than juvenile-minded cartoonists who gleefully ignored all the warnings that “If you keep doing that, we’ll kill you.”