Former ISIS Prisoner: “They Want Something Worse Than 9/11”

Former ISIS Prisoner: “They Want Something Worse Than 9/11” 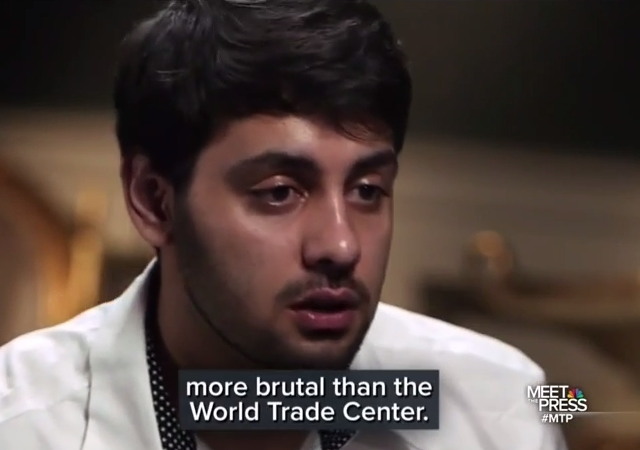 A man named Ahmad Rashidi was interviewed on Meet the Press today and provided an alarming look into the goals of ISIS. He claims they want to be “better” than al-Qaeda and orchestrate an attack “more brutal” than the 9/11 attack on the World Trade Center.

Man Who Escaped ISIS: They Want to Plan an Attack ‘More Brutal’ than 9/11

The Islamic State is “happy” about the air strikes by the United States because it validates their efforts in emerging as a global threat, says a man who escaped after a month with the group.

Ahmad Rashidi was captured by the Islamic State when he went to Syria from London to retrieve the two daughters of a family friend; the teenage girls had fled England to marry Islamic State fighters. When Rashidi found one of the girls, her husband accused him of being a spy and he was taken prisoner and tortured. He later won the favor of his capturers by telling them he was a doctor; Rashidi is, in fact, a first-year medical student.

While embedded with the Islamic State for a month, Rashidi gained access to their computers and communications. He told NBC News’s Richard Engel that the group communicates with its contacts “every day” and is not worried about the West’s response to its attacks. In fact, the Islamic State was “happy” about the American military’s response of air strikes because it proved to the group’s leaders that they were considered as important a threat as al-Qaeda.

“They want to be more . . . better than al-Qaeda,” he told Engel. “This is why they need to do something more brutal than the World Trade Center.”

Speaking of Syria, there are new developments in American policy.

Simon Tisdall of the Guardian reports:

US backing for Syria peace talks hosted by the Russian government in Moscow this week is being seen as further evidence that the Obama administration has quietly dropped its longstanding demand that President Bashar al-Assad step down as part of any settlement.

Russia, supported by Iran, has consistently backed the Assad regime since the civil war began in 2011, even after the UN implicated the Syrian leader in war crimes. The US government and the exiled Syrian opposition, supported by Britain, the EU, Turkey and Saudi Arabia, have argued with equal vehemence that peace is inconceivable while Assad remains in power.

As recently as last October, John Kerry, the US secretary of state, said there would never be peace in Syria “while Assad remains the focus of power”. But now Kerry has changed his tune. At a meeting this month with Staffan de Mistura, the UN’s Syria envoy, Kerry omitted any reference to regime change in Damascus, voluntary or involuntary.

“It is time for President Assad, the Assad regime, to put their people first and to think about the consequences of their actions, which are attracting more and more terrorists to Syria, basically because of their efforts to remove Assad,” Kerry said.

Tell that to Obamalini (Il Douche.) Then again, an attack on this scale is what Il Douche wants, so he can impose martial law.

Thank goodness we have iron man John Boehner at the bully pulpit of Congress, and Mittens Romney in the wings, ready to lose the national election a second time.

These conversations get more surreal as time goes on: the ‘police’ (the GOP) stay asleep in the Congressional donut shop while political criminals run rampant around them, destroying our way of life, and we harp the actions of Obamalini. It is the corrupt lamebrains hogging the leadership positions of the GOP are the problem. We need to harp on that – and them.

These guys are good, and they are very serious about what they intend.

It would be REALLY wise for the West in general to start calling them what they are, and fighting as if WE mean it.

The consequences of NOT doing that are predictable AND catastrophic.

The best way to destroy this country is to elect an America hating, racist, former community organizer as President who will ignore the constitution because “I won”.

ISIS is going to have to stand in line, we are doing it to ourselves.

An even better way to do it: elect the impeachable racist, then put in place an opposition party that won’t oppose him.

And while everyone is looking at the Middle East and Africa and watching President Idiot and his green-lipped interviewer:

Actually, the threat posed by the Moros is at least as great as any we’re facing in the Middle East. They have been in the Phillipines for generations but have never assimilated; they do not think of themselves as Phillipinos in any way. And they are proving to be very good fighters!

It was 49 Philippine police killed…maybe more. That was the number of bodies recovered.

Islam is a malignant, malevolent force wherever it infests.

For a “religion of peace”, Islam sure has bloody borders.

Why in the world haven’t a dozen Blackhawks flown over from Andrews, drop in on the WH lawn and arrest this POS and her puppet, Obama?