The crossover between modern feminism and textbook sexism. 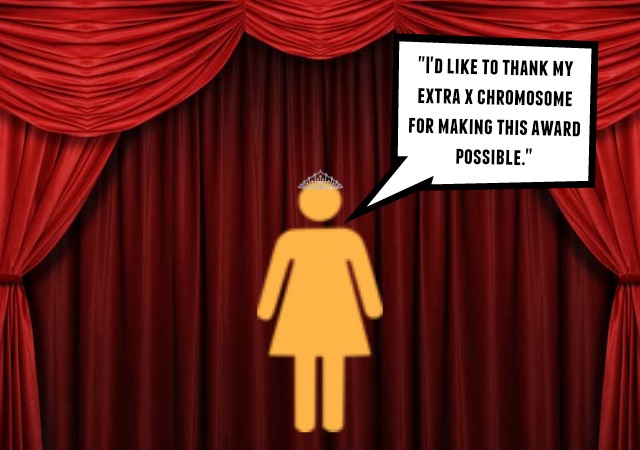 2015: the year feminism won all the things… or at least an entire award show.

Nestled in between articles like, “The Thong is Dead!” and “17 Butts From ‘Dating Naked,'” the astute publication Cosmopolitan recounted the Golden Globe award show in an intellectually stimulating article entitled, “Who Won the Golden Globes? Women. Feminism got top billing at last night’s awards.”

At the Golden Globes last night, it was hard to miss the feminist overtones. Two funny female hosts. Shout-outs and thank-yous to the trans community. Some of Hollywood’s most seasoned feminist activists taking the mic. Famous men declaring themselves proud husbands. Recognition of rape survivors.

But what about Amy Adams who had the gall to thank strong women in the room for being fabulous role models?

Some of the feminism on display was the kind of cookie-cutter you-go-girl-ism present at just about any award show in the past 30 years — see Amy Adams breathlessly thanking all the strong women in the room for being good role models for her 4-year-old daughter.

That desire to be heard and recognized set the tone for the night, and women led the way.

Sometimes I think “feminists” live in an alternative universe. How have women in this country been ignored?

And then there were the men. Despite a handful of typically boorish remarks — Jeremy Renner commenting on Jennifer Lopez’s “globes,” for example — socially conscious men showed up last night.

By “socially conscious” they mean men who give them the attention they want.

He took an early ribbing from Fey and Poehler good-naturedly, when Fey pointed out that Clooney’s wife, Amal Clooney (née Alamuddin), is a “human rights lawyer who worked on the Enron case, an adviser to Kofi Annan on Syria, and was appointed to a three-person commission investigating rules of war violations in the Gaza strip.” “So tonight her husband is getting a lifetime achievement award.”

Ok, that’s kind of funny; but it’s also a false comparison. In the context of his chosen career, Clooney is about as accomplished as they come. Sadly, Feminist Rule requires that his accomplishments be compared to those of his wife because, well, he’s not a chick.

Just imagine if such a scenario was reversed… “He’s won countless awards, engaged in humanitarian efforts, has been a stalwart of masculinity on the silver screen, spoken before Congress, and his wife who works as an attorney is getting an award.” The resultant wailing and gnashing of teeth would be enough to make Hades jealous.

Maggie Gyllenhaal’s acceptance speech was lauded as “the feminist speech of the night.”

“Nuanced, thoughtful, and honest, she skipped simplistic Girl Power cliches and touched on what truly made this past year’s roles for women so important,” Cosmo says. I can’t help but wonder if we were listening to the same speech. Don’t get me wrong, Gyllenhaal’s speech was sweet, but that’s about it.

No feminist post can be complete without talking about the alleged pay-gap. Cosmo’s was no different:

It’s true that there appears to be a gender-pay inequity in Hollywood. Top paid male actors like Robert Downy, Jr. make about $75 mil a year while their female counterparts like Sandra Bullock make about $51 mil.

That being said though, never have I crossed an article on Hollywood’s pay-gap issues that takes into account variables such as franchise or frequency of work. Robert Downy, Jr. for instance, is on the Marvel wagon, and therefore likely to rake in more dough than those working in the “not-a-guaranteed-blockbuster” camp.

Talent is also a mighty subjective issue. So I have to put an asterisk next to this one for that reason. Particularly when digging into how Hollywood paid men versus women in it’s early years doesn’t seem to show much pay disparity, if any.

We make light of modern “feminists” — their illogic and hypocrisy, but most troubling is that there seems to be an uncomfortable amount of crossover between modern “feminism” and text book sexism. Men are denigrated and viewed invaluable simply because they are male—nless of course with every breath they extoll femininity, in such cases they might get a pass.

And so “feminists” have come almost full circle… becoming what they claim they hate.

“And so “feminists” have come almost full circle… becoming what they claim they hate.”

It’s called payback, and nobody looks good doing it.

Another good term is “bullying”. That’s what “you don’t get it” means.

“Feminism” has all the precision of meaning as “comprehensive immigration reform” and “the values that make us Americans”.

If strong women had won anything connected with Hollywood wouldn’t there be far more roles for women on the plus side of 35?

Nestled in between articles like, “The Thong is Dead!”…

The thong is dead, and the antisex prudes of the feminist movement killed it. So much for sexual liberation! Perhaps feminists are terrified of female sexuality, and want to use primitive social norms to keep women under control.

It’s funny how progressives have come to embrace the 18th century morality they once decried and claimed to have liberated us from. Everything old is new again!

Distant, fragile, in need of defenders lest her tender sensibilities be offended, shielded, protected against the unstable world – pretty much everything that the original feminists were trying to get away from.

It brings the question as to whether these traits are evolutionarily inherent in the female of the species? That despite great efforts and energies to change this, the female tendency is to revert to them? Were yesterday’s feminists fighting against the very nature of the female?

On the other hand, having grown up in rural farming, there was no question of male or female being the subservient one to the other. Complementary, not hierarchal. The women I knew in my village did not need shielding or protection from the world: they took it head on and prevailed, as did the men.

It strikes me, then, that the feminist movement – whichever direction it might head (fragility vs. dominance) – is but the plaything of the leisure class; a game undertaken by the wealthy and bored.

ss396: and since everyone on earth wants to emulate the leisure class, then all follows from that.

I’m not sure about the “original feminists”. The movement has been extreme from day one. Mona Charen, I think it was, basically said that it was created by upper-middle-class women with mid-life crises.

Great moments in feminism, Margaret Cho insults Koreans with her idiotic routine, the hostesses decide that rape is a great topic for unfunny jokes, and all the feminists that have them, flaunt them.

I think the picture caption would be truer if the “X” was left out between “extra” and “chromosome”.