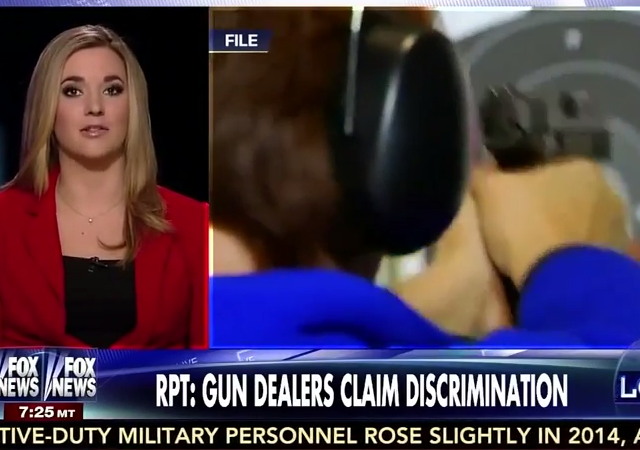 The Democratic Party has been unable to sway public opinion on the issue of gun control, but that hasn’t stopped the Obama administration from using the Department of Justice to harass legal gun dealers under a program called Operation Choke Point.

Guidelines designed to discourage banks from doing business with illegal and heinous operations involving things like human trafficking and child pornography are now being applied to legal and legitimate businesses which are deemed “high risk.”

Chuck Ross of The Daily Caller filed this report yesterday:

Conversations recorded by a Wisconsin gun store owner provide perhaps the clearest glimpse yet into how the federal government uses regulators to target legal firearm and ammunition sellers.

“Our hands are tied by it,” a regional manager with Heritage Credit Union told Hawkins Guns owner Mike Shuetz of federal regulations which forced the institution to close Shuetz’s bank accounts in November.

Recordings of Shuetz’s conversations with the manager and a bank teller, which were published online by the U.S. Consumer Coalition, make it clear that the National Credit Union Administration (NCUA) examined the credit union’s books and forced it to close Shuetz’s account — a move he blames on a Department of Justice initiative called Operation Choke Point.

Schuetz’s saga began on Nov. 13, when he says Heritage Credit Union informed him that it would have to close his bank accounts.

“I received a call from Heritage Credit Union in Hawkins, where I set up my business account for Hawkins Guns. They told me I had to close the account because they do not service companies that deal in guns,” wrote Shuetz on Facebook at the time.

Try for a moment to imagine the outrage that would follow if a Republican administration applied this sort of pressure to banks doing business with newly legal Marijuana dealers in Colorado (or any other business they just didn’t like.)

Retailers in the gun industry told The Daily Signal’s Kelsey Harkness this week that they’re being discriminated against by payment processors that prohibit the use of their systems for online—and some in-store—sales of firearms, ammunition and certain accessories. The news prompted a full segment last night on Fox News’ “The Kelly File.”

Better to send all those guns to Mexican drug lords.

“Try for a moment to imagine the outrage that would follow if a Republican administration applied this sort of pressure to banks doing business with newly legal Marijuana dealers in Colorado (or any other business they just didn’t like.)”

But innocent children don’t DIE because of the abortion industry the way they do from the gun industry!!!

Cars kill more Americans each year than guns, yet there are fewer cars than guns in America. By that metric car manufacturers and dealers must have their bank accounts closed.

Cars kill more Americans each year than guns, yet there are fewer cars than guns in America. By that metric car manufacturers and dealers must have their bank accounts closed. The risk from cars is greater than from guns.

And cars are not constitutionally protected as are guns.

The difference is that liberals use cars. Pushing laws/policies that crack down on car manufacturers and dealers would adversely affect their lives, too, which is unacceptable to them.

To hear liberals talk, firearms are the #1 killer of children, kids are being killed left and right with shocking regularity, and it’s amazing anyone survives to adulthood with all the guns walking around shooting “just going off” on kids.

In reality, firearms kill no one (not by themselves, anyway), and the misuse of firearms kills far fewer than cars, stairs, ladders, second-story windows, swimming pools, household chemicals/poisons, and fire. “MV Traffic” (motor vehicle) and “Drowning” are the top two causes of unintentional death for all ages 1-14. “Firearms” is a distant 9th (ages 1-4), 14th (ages 5-9), or 7th (ages 10-14) [source: WISQARS data]. Homicides are another story, but: a) intentional homicide numbers are far lower than unintentional deaths, and; b) does anyone seriously think that banning guns would stop homicides?

(That’s a rhetorical question; most liberals, by their words and actions, DO believe exactly that.)

High time for some nice multi-party civil suits against these government pirates.

The organized conspiracy should fit the RICO statutes. We need some hungry attorneys to step up.

Another gubmint directive that increases your BP. When the heck will this nonsense come to an end?

I’ve never done business with Pay Pal and never will. Any bank that “goes along” with this and doesn’t fight it tooth and nail also loses my business.

The thought has occurred to me that any new or existing banking corporation or credit union that bucked the government “guidelines” and “recommendations”, and whole-heartedly welcomedgun manufacturers, sellers, and buyers, would stand to make some serious capital and gain a massive market advantage, very quickly.

Probably even enough to fight off ambitious DOJ prosecutors, or just pay the fines/penalties (which have no force of law, being mere “guidelines” and “recommendations”, I might add) and continue business.

Any takers? Anyone? Bueller?

They’re worried about regulators yanking their banking license and putting them out of business if they don’t comply. That’s why nobody is pushing back against Choke Point.

We gave away our freedom long ago when we let the IRS take control of our money. Financing a war is one thing. Financing mayhem is another.

Someone already said it – but imagine if they did this to Planned Parenthood?

Or anyone involved in climate science.

FROM MY COLD, DEAD BANK ACCOUNTS!

The Anti-Federalists are looking down from the heavens saying “We tried to warn you guys.”

Time for the NRA to establish a gun industry friendly bank and credit union. I know I’d give them my business.

This is a great idea.

Is there still such a thing as a state-chartered bank?

It’s happening here in Florida too.
A few months ago I posted a comment on the tip line, regarding a Florida business owner who got his bank accounts closed for the same reason.