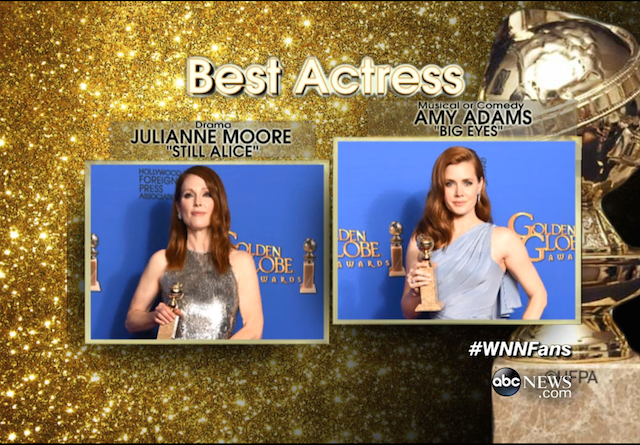 I remember when Halle Berry won her Best Actress Oscar back in 2002 for Monster’s Ball; it was such a huge deal–she beat Judi Dench! It was the same year Denzel Washington won for Training Day, and everyone agreed that entertainment awards would never be the same because an actor and actress of color had both taken home a prestigious award.

Apparently, Halle and Denzel didn’t set a standard that year—they set a quota.

So cover up all your mirrors. RT @chrislhayes Real white-out happening.

It’s true, whitey ford took home the top four awards for excellence in performance. Selma—this year’s only halfway-intentionally controversial award-bait—didn’t take home an award for Best Picture—but did manage to catch the award for Best Original Song, which it probably deserved. “Glory” is emotional and culturally and contextually relevant (if not heavy-handed and annoyingly about Ferguson):

According to Mediaite, the only other non-white major award winner at this year’s Globes was Gina Rodriguez, who won Best Actress in a TV Comedy for her work in the (terrible, awful, going-to-be-cancelled) Jane the Virgin.

It’s getting to the point where we can’t even watch a movie anymore without worrying about whether or not the next AP notification on our phones is going to contain some sort of irrelevant accusation of faux-racism brought forth by an annoying white hipster whose job is to maintain a bully pulpit. Oh crap, are there enough black people in this? Is at least one of them gay? PREVENT MICROAGGRESSION!

Newsflash: not every movie is Rent, and not every award season will be peppered with entertainers who play successful black lesbians maintaining destructive relationships with bisexual white environmentalists who cheat on hipster filmmakers who live with tortured musicians who chase after strippers who have AIDS and sing songs with drag queens who date insurgent college professors. In the Village!

I still have a hard time accepting the fact that until the day I die, everything I do—every song that I sing along to in the car, every movie I pay for a ticket to see—will be examined under a microscope and trotted out as evidence of the impossibility of a post-racial America. It’s annoying, and it tarnishes the artistry and best intentions of those whose skin clocks in a little lighter than the next guy’s.

This is confirmation bias at its worst and most dangerous. Pop culture is probably the single most powerful medium for messaging that we have at our disposal, and this is what it’s being reduced to—a mental checklist of racial quotas and microaggression prevention tactics that draw more attention to race than a racist award show judge ever could.

Jane the Virgin is darling. It has been renewed for a second season. While it abounds in silly jokes it has a much stronger moral backbone than most might imagine. It is also one of the few shows I can think of that actually acknowledges that religion exists.

I remember the days when a “whiteout” meant a huge snowstorm.

Or it was the device you used in order to fix a mistake that was made in pen.

Or after you use whiteout after you have made a mistake on your IBM typewriter.

I became a touch typist before I became a computer nerd.

I still get in trouble for saying “hit carriage return” or “hit return” instead of “hit enter” because nobody understands it anymore.

[note: CR in ASCII code is the number 13 which is what your computer keyboard generates when you hit the “enter” key.]

Just make sure you don’t label any of your external hard drives “Master” and “Slave.”

I provide for your amusement this classic tale of political correctness meeting computer hardware, from a few years back:

But… but… my BIOS still uses those labels!

Does that mean I need to stop computing!??

Wow. You get an award for being Black? Talk about privilege.

In Halle Berry’s case, i would say yes. I saw “Monster’s Ball,” and I was underwhelmed with her performance. Some parts of it were frankly embarrassing to watch.

Now I wonder why booby prizes weren’t passed out just because people just showed up to be a part of this departure from culture. Egalitarianism trumps “racism.”

The Hollywood elite should remain true to their inclusionary principles and dispense with all of the award shows. Instead, everyone who was in a movie last year gets a participation ribbon.

90 members of the hollywood foreign press association select the winners of the Golden Globes. Are they racist? Who knew??

Forget racism–Julianne Moore and Amy Adams are both redheads! Haircolorism! Microaggression against blondes and brunettes!

Amy….. I am so disappointed. My wife and I really enjoy Jane the Virgin. Of course it is silly and campy, its supposed to be.
Oh well…. at least it got renewed for next fall…

Last year, Lupita Nyong’o (sorry, “Lupita” alone suffices) won an Academy Award and was declared the “Most Beautiful Woman” by People magazine and “Woman of the Year” by Glamour, and regularly gushed over as the most stylish, glamorous, gorgeous, talented, etc.

Not to take anything away from her achievements or her fashion sense, but there was something a little patronizing in the eagerness of Hollywood and the popular culture generally to anoint a black woman as the best ever in every way — just as the whole Democratic party and mass media fell over themselves to pronounce Obama the most brilliant, wise, principled, compassionate leader ever.

And “Twelve Years a Slave,” of course, won numerous other awards. But suddenly Hollywood is now racist.

I never even thought of Denzel as black. He has true talent and I couldn’t see him stooping down to use the race card. Someone like LL Cool J on the other hand…

You know, buckeye, I was thinking the same thing. Denzel is watchable because he’s a great actor – not because he is black.

But Chris they got the Transgender thing completely covered. That should count for something.

Kermit. Yeah…. life is a bitch when you are green and imaginary. Most of the Hollywood elite only have to deal with being imaginary but Kermit suffers the additional burden of Greennism. And to top that off, in spite of the current hoopla in France, they have an historic legacy of eating the legs off of green creatures.

Wonder if even he believes the schtick that he cares.

The way Nancy Pelosi “acts,” maybe she should win a Lifetime Achievement Award from one of these movie star award thingies.