#Dronegate: “What the heck is up with White House security?”

#Dronegate: “What the heck is up with White House security?” 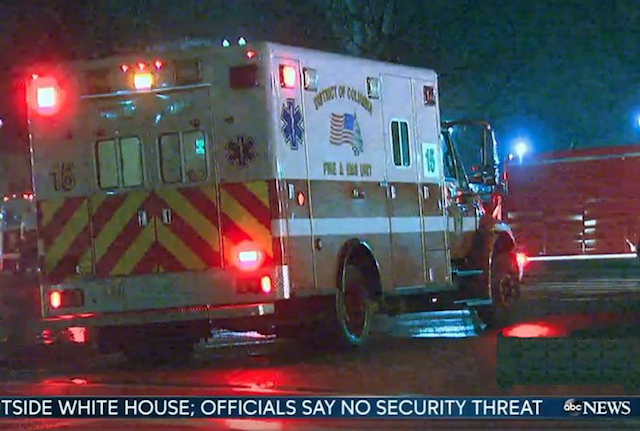 I suppose it will eventually stop being disconcerting every time someone breaches the 4 invisible walls surrounding the White House, but until that day happens, I think there’s an argument for license to make a “concerned-and-confused-and-even-disgusted” face when these sorts of things happen.

I woke up early this morning to a message from a friend asking, [w]hat is going on with the security at the White House? I mean, besides the obvious racism of the secret service? That’s when I found out that this had happened, via the Daily News:

There was a security scare at the White House early Monday when a two-foot quadcopter drone was found in the middle of the night on the executive mansion’s grounds.

The U.S. Secret Service is investigating, White House spokesman John Earnest said, but the aircraft did not pose a threat to the building. President Obama and First Lady Michelle Obama were on a three-day visit to India, but their daughters, Sasha and Malia, were at the White House.

An unnamed law enforcement official told NBC News the drone landed in a tree just after 3 a.m. Monday on the southeast side of the complex.

“An investigation is underway to determine the origin of this commercially available device, motive, and to identify suspects,” said Secret Service spokesman Brian Leary.

According to reports, the drone was not “weaponized,” but thank God the Obamas were out of town, anyway.

Obviously, flying drones near the White House is absolutely against the rules. (You can’t even drive a car in front of the place.) According to an expert (read: a friend who got one of these things for Christmas and promptly used it to freak out the whole neighborhood,) these drones aren’t the easiest to control. But still. Still—this is the White House.

Between shots fired and knife-wielding parolee fence-jumpers, the Secret Service has had its share of problems over the past few years. Neo-Neocon did a great write up about the problems at the Secret Service that you should read for more information on what’s been happening, and for a greater understanding about why something the media seems to be brushing off as “case-closed” gives me cause for concern.

Hopefully, all we’re looking at is this inevitable situation:

But you never know.

Who gave Biden the remote?

Funny, if not so serious considering all the possible drone pilots.

Who here knows anything about how sensitive radar can get? Seems to me it would be awful hard to detect and/or intercept something so small made mostly of plastic. Also pretty quiet, especially with all the noise of DC in the background.

I just wonder if there’s some amateur, just bought it, would-be drone pilot who lives a few blocks away who is now hiding in his basement having realized the drone he lost was found on the WH lawn: “Oh shit, oh shit, oh shit…”

The owner has already come forward, as I understand.

When I saw #Dronegate I thought Barracula was giving another speech…

Obama is the drone.

The rest is diversion.

I feel for somebody’s parents.

This sounds like a toy I bought my kids for Christmas. The park in front of the White House is very open, and would be an ideal place to try it out, especially late at night. Getting it over the fence at 3 am would be easy enough. Getting it back is another story.

I can just see myself flying cross-country to bail out a harmless college kid.

They can’t keep a small RC away from the WH any more than they can keep a fat robin from landing on the south lawn. An MQ-1, yes (big enough to detect and target). Small RCs, nope. Weaponized pigeons or squirrels? Nope.

Well, the White House may not be secure BUT Obama has transformed the Secret Service into a model of diversity with women, minorities, transgenders, and Albanian dwarf amputees all represented!

God help us if a terrorist got his hands on a water balloon launcher or potato gun.

When I read there was a drone crashed on the White House lawn, I thought of Biden, too. But I thought *he* was out there.

Apparently the problem with white house security is that they aren’t up, lol.

C’mon guys! Does anyone seriously believe 1.) that the operator of this drone “lost control” of it and “crashed” it on the WH lawn and 2.) that the Secret Service is somehow struggling to create an effective counter to such intrusions (or worse, that until now, they hadn’t even contemplated such)? Nonsense! This drone was taken down by electronic counter-measures! The story is just cover for the fact that such counter-measures already exist.

Recently a guy hopped the fence and strolled several rooms into the White House.

High tech defense gear is all fine and dandy for the Secret Service detail, but it’s hard to get prostitutes to stay near the control consoles for very long. They get bored. This creates exploitable gaps in security.

LOL, I was thinking its hard to watch the monitors with a prostitute under the desk, but same difference. 🙂

WASHINGTON — It was 42 degrees and raining lightly around 3 a.m. on Monday when an inebriated off-duty employee for a government intelligence agency decided it was a good time to fly his friend’s drone, a 2-foot-by-2-foot “quadcopter” that sells for hundreds of dollars and is popular among hobbyists.

But officials say the plan was foiled, perhaps by wind or a tree, when the employee — who has not been named by the Secret Service or charged with a crime — lost control of the drone as he operated it from an apartment just blocks from the White House.

The small drone, called a DJI Phantom, evaded White House radar that is calibrated to warn of much bigger threats, like an airplane or a missile.

(my emphasis)
Now go wipe the egg off your face, you look silly. 🙂

Yea, you would think that, but then again you would think there were missile batteries protecting the Pentagon that would have taken out that plane before it hit on 9/11, but there weren’t. I mean why do that, its only the central freakin command for our entire military!

Remember we are talking about government here, if its a good idea and makes sense you are probably better off thinking that they decided to go a completely opposite direction.

This was meant to be a reply to @DaveGinOly, but it didn’t get added that way. Strange.

Am I the only one who’s getting tired of these toy quad-copters being called “drones”? There is a difference between toys and military equipment.

This is what happens when you fill an organization with political yes-men more concerned with appearances than actual competency at their jobs.

The Secret Service’s failures are simply far more immediately apparent than the myriad failures of other government agencies.