“Are you ready to send ground troops into Iran?” 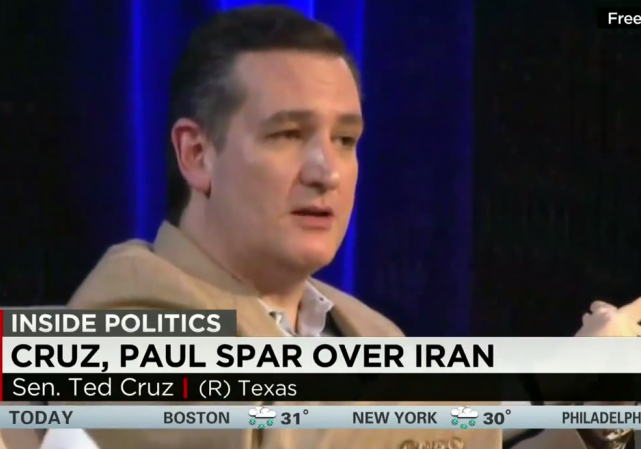 This weekend, Senators Cruz, Paul, and Rubio squared off about a number of issues at a Freedom Partners event; Iran being the most contentious part of the conversation.

“We’re allowing Iran to continue building centrifuges an enrich uranium. They’ve been negotiating for two years, this is the worst negotiation in the history of mankind,” Cruz said.

Historically, Paul has professed non-interventionism, while also toeing the “we must act now” line. Regardless, it’s an interesting frame to the Republican foreign policy debate moving into 2016.

But he’s removed himself from my list this cycle by playing “Pander Bear” with Sharpton, among other things.

Not only has Rand stated publicly dozens of times there was no difference between him and his father on policy, but he continually voices identical positions. They will consider military action ONLY when the US is directly attacked.

So a rescue mission to save ISIS hostages is okay. Ron approved invading Afghanistan to get bin Laden, but not to topple the Taliban.

If the Paul foreign policy had been in place from the end of WWII, we would be living in Soviet America today. Nothing would have deterred the Soviets from rolling over Western Europe or grabbing Iran and much of the Middle East. All of Korea would be under the Kim regime; we would not have intervened. The Chinese ambitions in Asia would have been unchecked.

But, boy oh boy, once the Reds started coming up the Mississippi River in rowboats to actually invade us, the Pauls would be tough.

Sorry, boys, it’s a different world from the George Washington didn’t wish to see us entangled in. It took weeks for a letter to get from Europe to America then; an Iranian missile could be here in 20 minutes.

Paul is finite for ’16 and possibly even re-election for the senate. He has damaged himself by waffling on immigration and his weakness in foreign policy and defense. He has revealed that he is a chip off the old block through and through.

While the economy will be the #1 issue in ’16, defense and foreign policy will be higher on the priorities list for most compared to how it’s ranked in the past. That’s because obola’s foreign policies have led to death and misery for so many people so many places and because of his demonstrated disrespect and dislike of our military. Rand Paul is a weak sister on those two subjects, as well as immigration.

Ah. So Paul is more like his father than he’s let on. “Negotiating” with Iran is just a way of paralyzing the civilized world while Iran builds bombs.

It’s a tough issue. Letting Iran get the bomb is fraught with danger. All out war in the Middle East is not an obvious winning alternative though.

An intermediate strike to consider: bombing of the oil terminals. This would be an act of war but it would be conventional not nuclear. It would involve limited targets at the edge of the country. It would dry up funds for the regime and punish the countries who are helping Iran by buying their oil.

At this point, though, regardless of the specific plan to handle the problem, I’m happy to go with a candidate who at least sees that an Iranian nuclear weapon is a big, big problem. Not something to be ignored/negotiated.

Go to war or negotiate? False dichotomy. We *were* doing something that was working – sanctions – which Obama has lessened greatly. Reimpose and increase sanctions. Choke Iran to the table or to death.

Laup Dnar is just as bat guano crazy as his dad…

he just (usually) hides it better.

This has always been where the Libertarians fall flat on their faces – defense. In a Libertarian world, defense shouldn’t be necessary. And they’re right. But the world isn’t Libertarian – a reality they refuse to deal with.

The Persian situation hasn’t changed in the past decade or two. Negotiations are useless – negotiation as a tactic is a search for the middle ground, and what middle ground is possible here? We have a nuclear-armed Iran, or we don’t. There’s no obvious useful compromise in sight.

The foreseeable future seems to hold only two basic possibilities – war sooner, or war later. If sooner, it will be conventional, and if later, it will be nuclear. Take your pick.

The mullahs have never negotiated in good faith. Their usual tactic has been to seek delays and more talks, demanding concessions of some sort to continue. Then in the end they walk away. They openly defend the tactic of lying to the West as justified by their religion.

Hard to see a difference between that and what they are doing now to play Obama. By the time the next deadline rolls around, he will have handed over $11 billion to the regime and got nothing but empty talk.

Thank you, Rand, for giving sane consideration to NOT being the imperial policeman of the world, thereby giving us an alternative to the “bomb early, bomb often” cheerleaders across the political spectrum (Clinton, McCain, Romney, et. al.)

I don’t believe Ted ever said we should not negotiate, he simply said these have been horrible negotiations. Rand worked the straw man well, as a typical politician, without ever offering any solution to the horrible negotiations and just scored political points with some CNN people nobody watches.

Strawman arguments are a “holy sacrament” of the Ronulan cult.

The reason there was no nuclear war between the Soviets and the U.S., or for that matter between the ChiComs and the U.S., is because the Soviet and ChiCom leadership enjoy life at the top as much as U.S. politicians enjoy life at the top. The Iranians, special bulletin, are absolutely certain that a better life awaits them especially if they take as many non-believers as possible with them. But I suppose the world and Rand Paul has decided to find out exactly how doctrinaire the Iranians actually are. Very glad my home is forty miles west of Times Square.

Supposed “moderate” former Iranian President Ali Heshemi Rafsanjani has already told the world what they intend to do with nukes once they get them:

Rafsanjani said that Muslims must surround colonialism and force them [the colonialists] to see whether Israel is beneficial to them or not. If one day, he said, the world of Islam comes to possess the weapons currently in Israel’s possession [meaning nuclear weapons] – on that day this method of global arrogance would come to a dead end. This, he said, is because the use of a nuclear bomb in Israel will leave nothing on the ground, whereas it will only damage the world of Islam.

Nuclear blackmail may be the “best case” scenario. And it’s also pretty obvious that they don’t give a damn about the precious Palestinian Arabs.

Their current “moderate” president has been implicated in the bombing that Argentine prosecutor who “shot himself” was investigating.

Here’s a campaign promise to be considered: A Stuxnet virus in every Irani centrifuge pot and trading the WH ‘chief of Newspeak PR” Valerie Jarrett for American hostages held by any terrorists. What could be a better example of egalitarian and “fair share” foreign plicy?

As Henry said above, sanctions do work. The Obama papacy doesn’t.

Obama’s foreign policy has all the earmarks of, how shall I say it? A je ne sais quoi that appeals only to golfers who chew gum and to those who like to use folk singers to combat terrorism?

Hoooow many times must Obama look up
And pretend that he just doesn’t seeeee?

Good strategy requires a sound understanding of one’s rivals. A rival in any walk of life is, in a sense, an interlocutor. To engage him effectively in debate one must understand his speech and reasoning patterns. Without that knowledge, conversation is at best pointless, at worst self-defeating. So it is in strategy. It is futile to engage in competition with a rival power without having at least an inkling about his thoughts, fears, and desires.

The modern Western penchant for trusting in the equal rationality of all suggests otherwise. According to this conceit, there is no reason to plumb the nature of an enemy’s thinking because it is no different in essence from one’s own. But this is wrong. A rival’s response to one’s strategy is not predictable as a simply rational and universal reaction that can be generalized and grasped with relative ease. Rival states or groups respond to similar actions in different ways based on their culture, worldview, history, and the proclivities of their leaders. Good strategy, as Bernard Brodie once put it, “presupposes good anthropology and good sociology.”
—
http://www.the-american-interest.com/2015/01/23/know-thy-enemy/

Iran is a foreign entity in every possible meaning of that term. If you don’t comprehend that, you are daft.

Reflecting on the actual clip, and then the coverage of it, makes me ill. First, I am glad the debate is happening, we need to have an open debate about what to do but second, that the media take is “oh, look, Republicans squabbling,” when the friggin story is “hey! there’s actual real nuclear clouds on the horizon, what are we going to do to prevent it” just infuriates me.

Aren’t those talking heads Americans? Are they blind?

“Aren’t those talking heads Americans? Are they blind?”

There is no reason the ME has to continue as a stone in the nations’ shoes.

Rand Paul is an absolute disgrace.

His opening retort is to go for an Obama-style straw-man.

When, not if but when, Iran becomes a nuclear power not only will we have Obama and Russia to blame, but Rand Paul and his father as well. After that, it will only be a matter of time before Iran sends someone, or a cargo container, with a nuke to blow up Tel Aviv or New York City.

Because of their enablement of Iran and Obama/Jarrett’s petty spitefulness, they are sending a campaign expert to Israel to try to defeat Netanyhu because he dares to address Congress on Iran.

I hope this illegal and unethical perfidy backfires on the two of them like a Palestinian rocket.

obola and his administration were already trying to undermine Bibi’s re-election. If they weren’t, Bibi probably would have notified the WH of the invitation before accepting.

While Paul is correct in that the Middle East has been a mess for quite some time he doesn’t seem to realize that allowing Iran to go nuclear would destabilize the area even further and potentially allow the mess that is the M.E. to spread even further. The root problem though of the whole mess is Islam itself. As long as that death cult continues to rule the hearts and minds of those who live in that area the region will not be peaceful or stable.