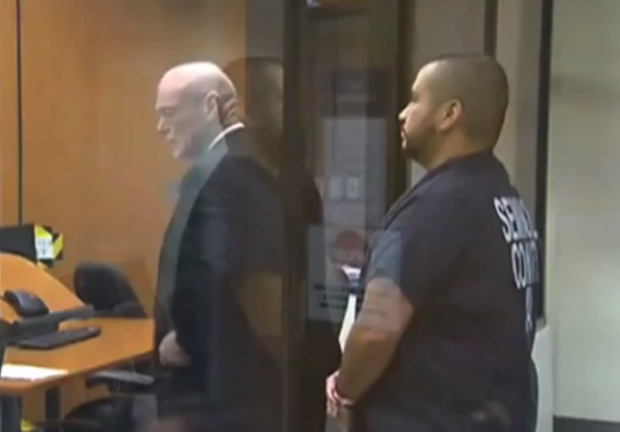 Despite all the hate directed at George Zimmerman for having successfully defended his life against a vicious ambush attack by Trayvon Martin, and numerous encounters with law enforcement both before and after that fateful night, he has yet to be convicted of any crime whatever.

That trend continues with the dropping of the latest charges brought against him of aggravated assault.  Prosecutors have now declined to pursue these charges after Zimmerman’s ex-girlfriend accuser recanted her testimony, reports the Associated Press (h/t @AaronWorthing).

Zimmerman had been arrested and charged last month after his girlfriend was pulled over during a traffic stop, during which stop she told police that days prior Zimmerman had thrown a bottle of wine at her.  We reported on that arrest and surrounding details here:  Deja Vu: George Zimmerman Charged with Aggravated Assault.

The Orlando Sentinel has the lastest details:

George Zimmerman won’t be prosecuted for allegedly throwing a wine bottle at his girlfriend, the State Attorney’s Office said today.

But this morning the State Attorney’s Office reported that the woman, 28­ year ­old Brittany Brunelle, recanted her story and refused to cooperate. As a consequence, it is dropping the case.

This is the second time in just over a year that Zimmerman has been arrested, accused of becoming violent when a girlfriend breaks up with him. In both cases, the woman changed her account, stopped cooperating, and prosecutors closed the case without filing charges….

Lake Mary police got involved about 11:30 p.m. Jan. 5 when an officer heard breaking glass and saw the woman drive away from Zimmerman’s Lake Mary home without turning on her headlights.

When he pulled her over, she told them that Zimmerman had just thrown a wine bottle at her and broken her phone, according to police department paperwork.

The fight happened while she was breaking up with Zimmerman, according to the report.

Once again, Zimmerman gets the last laugh.

Isn’t this the second time his girlfriend accused him of assault and then recanted? He needs a new girlfriend. And she needs to be charged for pulling this crap every time they get into a fight.

You’re not getting it. This is a DIFFERENT girlfriend, and when she broke up with him she tried bawling her eyes out to the police to get him in deep, deep trouble because she knew it would be effective, because the system wants his head on a platter. Why? Because the girlfriend before her made national news with her own accusations.

He needs to just swear off women for a while, move out of state and so forth. Seriously. At some point officers are going to hunt for him guns blazing based on a tip.

Is this the same woman? I thought it was a different girlfriend than last time.

GZ needs to join a monastery, get right with God, and put an end to all the quasi-abusive relationships – with women and with the media.

Someone going by “Archer” is advocating joining a monastery and not this? what is the world coming to?

My recommendation to GZ is the same as it was the day he was acquitted: get your passport, and disappear to some SE Asian country where they’ve almost never heard of you. I’ve heard that Thailand is quite nice.

And perhaps change your name before going?

I’ve been using the screen name “Archer” since long before the animated show came out. Old habits die hard, you know.

But either way, we can agree on this: GZ needs to fall off the media’s radar. Whether it’s by joining a monastery, or relocating to a different country, or changing his name and getting a simple farm job in “flyover country”, doesn’t matter. He needs to get himself out of the public eye. The media will never stop making national news out of his every minor misstep, so he needs to find something else to do.

Zimmerman should just forget about having any kind of serious relationship, for a long time. The dangerous atmosphere that follows the Zman is the kind of thing that attracts the worst head cases and freaks out there, like those women that fall in love with death row inmates.

Lake Mary police got involved about 11:30 p.m. Jan. 5 when an officer heard breaking glass and saw the woman drive away from Zimmerman’s Lake Mary home without turning on her headlights.
———-

I don’t recall hearing this part last time, which does add some context. Although it made me wonder if the office was waiting outside Z’s house, hoping to get something on him…

Seems the officer might have been out of his patrol car, lurking. How likely could someone hear breaking glass inside a home, while in a patrol car driving down the street? Or was the patrol car parked in front of the house? And if you were assaulted, and exited the house, upon seeing a patrol car RIGHT THERE would you not approach the officer yourself?

Even if the officer did hear breaking glass, how could the state prove that GZ threw the bottle and not the girl friend? Or that the bottle was not just knocked off the counter?

This added detail of the officer hearing broken glass actually makes me think that the police are actively violating GZ’s civil rights and privacy.

Sounds like the local PD needs a closer look.

Eric Holder should investigate for a possible civil rights violation. Seriously, Holder is anti-Zimmerman and anti-cop, so he would have a Hobson’s choice here over which side to come down on.

Originally, the story was that she told the cop that Zimmerman had thrown a bottle of wine at her “days prior”. So yeah, this new version is passing strange.

By the way, January is fairly chilly even down in Orlando. He wouldn’t have had his doors & windows open, making it even stranger that someone out on the street could have heard a wine bottle breaking inside his house. Are they stalking him or something?

I thought the story was that they found the broken glass outside on the driveway? When did it morph into inside the home? Am I wrong about that?

BINGO!! What was the officer doing outside of the Zimmerman home so late at night. Yes I had heard about this aspect of the arrest.

By the way, this is a different girlfriend than the first one who recanted.

Keep AWAY from the wimmins.

Move to Texas, and STAY AWAY FROM PUBLIC APPEARANCES.

Do this for TWO years, and get some good counseling for that time.

All will be well, and you will find a NORMAL lady.

Mr Zimmerman has to stop sleeping with crazy. There are forces that would like nothing better than to nail him to a wall and incarcerate him permanently– so far, they have failed, but ye gods and little fishes,please keep a lower profile. Move out of state, drop out of sight, and especially use care in selecting girlfriends.

Good luck with that, considering the cultural and legal changes that allow a woman to charge someone with rape 5 months after the event (after she sees him with a new girlfriend).

As of the most recent elections, he was still a registered Democrat.

It appears George is attracting women based on his public fame/notoriety rather than the traditional reasons for attraction. Tighten the screen, buddy.

Who is surprised by this development?
Anyone? Bueller? Bueller?

Another reason you know it was bogus is that if it were real they would have made it a Domestic Assault charge and they they could pursue it no matter what the girlfriend said.

Oh, and don’t kiss them on the lips…just sayin’

Ok, George its time to take some steps to improve your life.

1: MOVE THE HELL OUT OF FLORIDA!

2: MOVE THE HELL OUT OF FLORIDA!

4: Stay single for a year or two, one night stands and never tell them your real name.

5: If you can afford it, minor plastic surgery.

George needs to get out and stay out f FL. He should move to a nearby redder state where they “get it” and is close enough for his family to visit. GA or SC could be good choices. He’s a “trouble” magnet and it’s obvious that the LMPD and the state are gunnin’ for him.

Move, go sub rosa, stay away from women, especially needy women who don’t have their acts together, find some kind of work and some PTSD counseling. This may have been GZ’s last stroke of good luck following a string of very bad luck events. he needs to develop some street smarts and learn how to avoid trouble and trouble-fraught people, especially women. Lay low, work, study, go fishing, learn introspection, and relax.

If his name had been Jorge Mesa he would never have got in trouble in the first place, and none of us would ever have heard of him.

I mean you could tell that the Arrest was going to fall apart from the beginning. The arrest report reads like a litany of civil rights abuses. The PD was harassing Zimmerman left and right and was trespassing on his property despite being ordered by his lawyer. He also refused the lawyers demand that he speak to them and continued harrassing Zimmerman till he would come out. Also in the statement, he said he had probable cause from Zimmerman exercising his right to remain silent and speak through his lawyer. So yeah they knew what was going on. the arrest was bogus

I can understand, to a point, Zimmerman staying in Florida if I’m correct that his parents still live there.

But, by now, I hope he’s got it through his head that the authorities are going to take any opportunity to try and ruin his life – permanently.

You know, he didn’t have to throw her out. Instead, the judge ordered him to give a box-full of her stuff to his attorney. And, his attorney turned it over to the state.

Think of what he saved on moving her out costs!

Yes, for journalists, he’s a free ticket to money. Because? Without their writing about this they don’t get paid.

Sure, they’d get paid. They’d get paid for writing biased half-truths and sensationalized drivel about some other innocent non-black bastard that they don’t believe has been raked over the coals enough.

Why am I somehow not surprised…. Oh, because it felt bogus from the get-go, and I’ve got a pretty decent nose for when a prosecutor is trying to BS their way to a conviction. That’s why….

Zimmerman – GET OUT OF FLORIDA. YOU WILL NEVER BE SAFE THERE FROM PROSECUTORS TRYING TO CONVICT YOU. YOU HAVE BECOME THE GREAT WHITE WHALE THAT EVERY DA WILL GO AFTER JUST TO MAKE YOU A TROPHY.

I had read that he was made to surrender his firearms. I wonder if that happened, and if he got them back.

Whatever happened to the Holder Grand Jury? Is it still investigating Zimmerman? I haven’t heard that they refused to indict.

Does this mean that George has his guns returned.

The St. Mary’s LE Department want to deprive GZ of his guns. This is what that chief said in the first place.

So far all of the claims of domestic violence have been untrue.