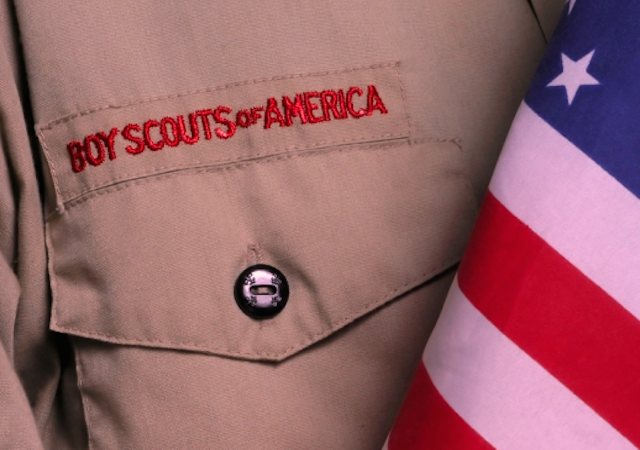 California’s seven Supreme Court judges have voted unanimously to prohibit state judges from holding membership in the Boy Scouts of America; the ruling is based on the grounds that the Scouts discriminate against gays.

California is one of several states that has rules on the books banning judges from holding memberships in groups that discriminate on the basis of sexual orientation; the court, however, also carved out an exception for non-profit youth groups, including the Boy Scouts.

Everything changed, however, when an ethics advisory committee recommended the ban last year.

The San Francisco Gate has the history:

California has been among 23 states with an ethical code that prohibits judges from belonging to organizations that discriminate on the basis of sexual orientation. But the state’s Supreme Court in 1996 approved an exemption, unique to California, for “nonprofit youth organizations” to accommodate judges affiliated with the Boy Scouts.

The Bar Association of San Francisco and other legal organizations sought to repeal that exemption in 2003. The court refused, and instead instructed judges to disclose connections to the Boy Scouts when they heard cases involving gay rights and related issues, and to disqualify themselves for any conflicts of interest.

At the time, the Scouts also barred gay youths as members, a policy the U.S. Supreme Court had upheld in 2000. The organization repealed that ban at a national meeting in May 2013, effective the following January, but maintained the prohibition on gay and lesbian youth leaders.

“The people of California have a right to an impartial and unbiased judiciary,” Richard Fybel, a state appeals court justice in Santa Ana and chairman of the high court’s ethics advisory committee, said Friday. “This is important to accomplishing that.”

The ethics committee offered its recommendation in February of last year, but the Supreme Court elected to hold off on making its final decision on the matter until two Brown-appointed judges took the bench this year.

Judges have until January 21 of next year to dump their membership; if they don’t they could face removal from the bench.

Will we see a challenge to this rule? My guess is yes; we’ll keep you posted on what happens next.

I understand that the Boy Scouts discriminate on the basis of sexual orientation.

It was also my impression that the Boy Scouts discriminate on the basis of sex [girls are not invited]. Shouldn’t that also disqualify the judges?

It was also my impression that the Girl Scouts discriminate on the basis of sex [boys are not invited]. Shouldn’t that also disqualify the judges?

The rationale for discrimination in all the above cases is exactly the same. The organizations do not wish to introduce the variable of sexual attraction into the functioning of the organization.

Dollars to donuts – at least one judge will be a member of NAMBLA, but will not be asked to dump their membership. Inclusiveness, you know….

That is probably a bonus qualification for appointment.

Geez. I thought the rule was to prevent judges from being molested by scout leaders.

And there goes the last piece of “justice is blind.”

I guess we will never see a muslim judge in California, right?

…OR an LDS, Catholic, or most Christian sects. Hell, even Hindus consider homosexual practices a “bad” thing.

When California becomes the first state to include sharia law, all the judges will be muslim.

The “big one” can’t come soon enough to suit me. The hypocrisy that pervades the left is just astounding.

FrankNatoli in the first post already summed up my view.

Dunno about the Kulhifornia constitution, but the Federal Constitution has a First Amendment provision that has been held to include “free association”. I don’t see how this does NOT violate that provision.

I ALSO don’t see how it does NOT impose a religious test on state supremes.

You know, I was wondering about that too given the way SCOTUS read ‘association’ into the Constitution in NAACP v. Alabama.

But, then I remembered that Boy Scouts of America v. Dale was based on a private organization’s actions, and the Supremes blessed private exclusion there. The rub here will be that it is the actions of a “public” arm (the California Supreme Court, as the licensing grantors of the State of CA) in prohibiting an individual member of the Judiciary from being a part of a “discriminatory” organization.

[Side note]That means whatever the hell the CA Justices want it to mean on any given day. There won’t be a single shred of logic, consistency or method of evaluation to it. [End note]

It’s not a big stretch to see a Judicial Body take that concept and expand it to freedom of association, by saying that “by being a member of an organization that discriminates against [X protected class] in the California Statutes brings the profession of law into disrepute.”

My guess is that the SCOTUS Supremes don’t even bat an eye at it, saying “it’s a licensing body, it can do whatever the hell it wants to.”

“being a member of an organization…brings the profession of law into disrepute.”

You mean like being a member of the ACLU? Had a debate with an attorney who like me was a member of the Cessna Pilots Association. Asked him why the ACLU pretended to be a protector of constitutional rights while on one hand it argued in favor of Nazis marching through Jewish populated Skokie and on the other hand it ignored 2nd Amendment rights [and many other contradictory examples]. His straight faced reply: the ACLU acts according to its charter NOT according to the Constitution.

I say that position brings the legal profession into disrepute. What do you say?

Then I say that ACLU membership, present or past, should be sufficient grounds for removal from the bench, disbarment, and loss of franchise.

Let us hope the BSA pushes back against this BS by granting “Notmembership” to every judge who is forced to resign, which would be a legacy title somewhat akin to ‘alumuni’ (because after all, you can’t legally force a judge to not every *have* been a member). As a ‘Notmember’ of the BSA, they would be entitled to attend all of the same activities without that nasty ‘membership’ that the CA Supremes seem to hate so much.

And watch the haters fume…

“Special Judaical Friend” of the BSA.

FLUCK with their heads…!!!

So this gets challenged, goes to SCOTUS, overturned and precedent is set. That should settle that.

Boy Scouts is not a religion, but they can hold to their chosen religious beliefs, can’t they? I don’t understand what separates their private group from a private church group. It is a variation of the same. Are churches forced to allow openly gay men into their priesthood, or would membership in that restrictive church be grounds to dismiss a judge?

What other “abnormal” sexual practices must all groups be forced to allow into their fold, with absolutely no discriminatory sideways glances, nor doctrinal disagreements? Age of consent in parts of Mexico is twelve I hear … shouldn’t that be part of the ever expanding “sexual revolution”, along with polygamy, open marriages, etc.?

If Boy Scouts members can’t be judges, what can they be? Shouldn’t they be forced to warn their neighbors of their morally judgmental conduct?

Unlikely. See my discussion above re rights lawyers ‘voluntarily’ give up to be part of the profession.

You can’t even talk about girls when you’re in your boy scout troop.

A lot of troops/packs are chartered by churches.

Not sure if the organization has the money/power to fight this.

Everyone wants the Scouts to help the community, but this 1% attacks it.