Branco Cartoon – Hands Up, Wallets Out

Branco Cartoon – Hands Up, Wallets Out 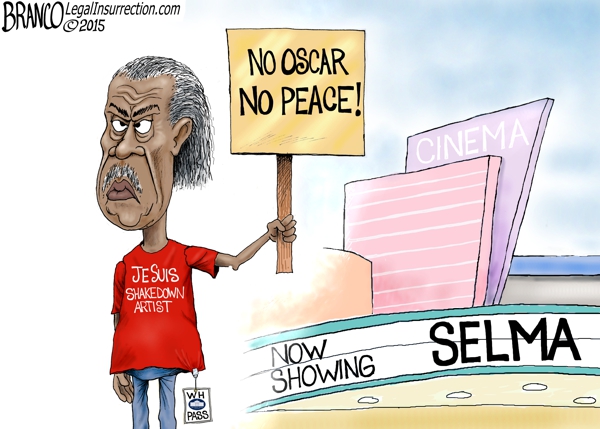 Note: You may reprint this cartoon provided you link back to this source. To see more Legal Insurrection Branco cartoons, click here. Branco’s page is Cartoonist A.F.Branco .

At first look I thought it said Jesus, and you meant to say “Jesus, I’m a shakedown artist”. 😀

So nominated for Best Picture is simply not good enough.
Why not hold a black Oscars at Al Charlaton’s Black Action Network headquarters. They can then win ALL the awards in every category and go home happy.

I thought it was Black Agitate Nutworks.

Branco’s got the proportions right … fat head, emaciated body. Of course next time he might want to include the Rev’run’s girlfriend Aisha in the cartoon … she’s 23-years his junior! Sorta like Clinton and Lewinsky … it must be a democratic thang …

When GOPers do this, it’s called robbing the cradle. When Dems do it, they call it finding his soulmate.

The Oscar for best performance should go to the first studio executive that tell Sharpton where to go!

I wonder how his shakedown of the technology industry is going? When I first read about it a few months ago I literally spit coffee across my desk.

I’ve developed commercial software for the financial sector for 25+ years, and it is not at all unusual for me to be the ONLY white guy in the room when I’m in meetings. It’s a virtual UN in the industry with lots of people from India, China, various western and eastern European countries, almost everywhere. What you DON’T see is very many black Americans.

So, is that the result of racism on the part of the industry, or is there something going on with that community where they are self-selecting themselves out of the IT jobs?

And besides, why isn’t this guy in jail? He has incited riots that resulted in murders and doesn’t he owe the gubmint about $4.5 million in back taxes or something? People everywhere should grow a pair and tell this nasty troll to STFU and crawl back under his rock.

Al Dullton has just ascended to a new high: he is now the head of Morons-R-Us!! The Golden Globe presentations in January of any given year are for films first aired during the previous calendar year, or 1/1-12/31/14 for this year’s awards. The full version of Selma didn’t screen until this year, placing it clearly outside the awards criteria; the 30 minute excerpt screened in October for a select audience doesn’t count.

Al should shut up, go home, and be content with his undisputed Tawna Brawley Award.

Oh, and note that the Academy Awards have the same “last year” award criteria!

Doesn’t Black Entertainment Television have its own awards show for movies?