The hospital urged them to “get out, get out” 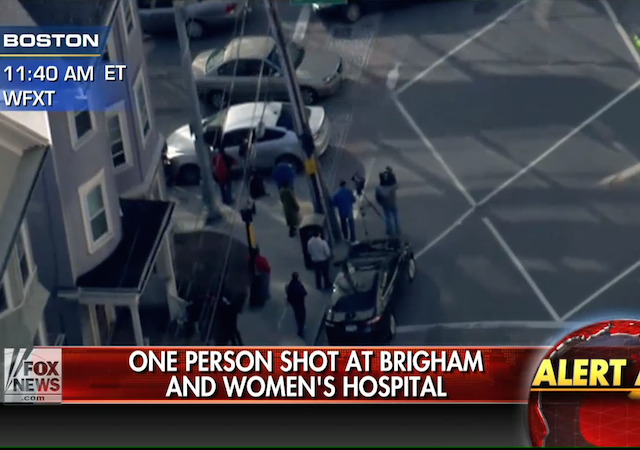 This morning, a lone shooter walked into Brigham and Women’s Hospital in Boston and shot a doctor before turning the gun on himself.

“[The shooter] came into the hospital asking for this particular doctor,” Boston Police Commissioner William Evans said. “We don’t know why. That’s something we’re looking into.”

The Boston Globe reported that the hospital was under a Code Black, which means no additional patients were being accepted.

The scene was chaotic, according to one witness. The hospital made an announcement about a situation, without going into details, and told visitors to evacuate. The witness told MyFoxBoston that a few minutes later, the hospital urged them to “get out, get out.”

Another witness told The Globe that the hospital made an announcement that there was a life-threatening emergency and individuals should go into a room and lock the doors.

The victim, a prominent surgeon, was shot twice and remains in the hospital in critical condition.

#BPDCommunityAlert: BPD confirming one person shot inside Brigham & Women's Hospital. Suspect has been located & in custody.

The situation at BWH is under control. Boston Police have assured us that the hospital is safe.

We’ll keep you updated on the situation, and the shooter’s motive.

I don’t understand. How could he bring a gun into a gun free zone?

This will probably go on his permanent record. Didn’t he listen in elementary school?

why stop him from shooting himself??

“The situation at BWH is under control. Boston Police have assured us that the hospital is safe.”

The hospital is as safe after the shooting as it was before the shooting, and as safe as it was during the shooting. In other words, you are on your own as to providing your own personal safety. If you perceive your safety status differently, then I suggest that you look up the meaning of the term “Potemkin Village”, as you are envisioning one in your mind.

How many shootings in so-called “gun free zones” will it take before many come to this understanding? The laws of the Commonwealth of Massachusetts, like the laws in many other states and from the Congress, endanger their citizens because of the fixation on the illusion of safety via legislation and government regulation instead of the ugly, nasty, brutal reality of what will actually provide safety – the promise of an overwhelming violent response to acts of violence from those “first responders” other than the police.