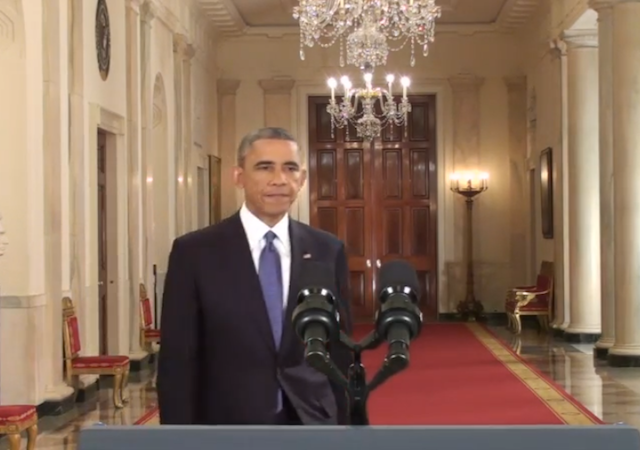 Now, a group of mayors are organizing their own campaign to support the president’s executive overreach.

New York City Mayor Bill de Blasio and Los Angeles’s Eric Garcetti are leading a group of more than 30 big city mayors, the National League of Cities, and the U.S. Conference of Mayors, who plan to file a similar amicus brief on behalf of the president. Like the states supporting the president via amici in Texas v. United States, the mayoral amicus brief states that, “public interest across the country is served clearly and overwhelmingly by implementing immigration reform by executive action,” according to a statement released from de Blasio’s office.

“Our mission is urgent. Delaying implementation of the President’s executive action will further hurt our families, negatively impact our economies, and create unnecessary insecurity in our communities,” said Mayor Bill de Blasio. “Cities are where immigrants live, and cities are where the President’s executive action will be successfully executed. We are organized, and we will fight for the changes this nation needs and deserves, and fight those who oppose immigration reform, be it in the courtroom, in Congress, or in our communities. Our voices will be heard.”

Houston’s Annise Parker is the only Texas mayor currently supporting the initiative.

Mayoral quotes cited in a statement were full of empty rhetoric and tired buzz words:

“Filing an Amicus Brief is our way of saying: Pittsburgh stands on the right side of history.” – Pittsburgh Mayor William Peduto

“This order will strengthen our commitment to inclusion by allowing all residents to fully participate and help grow the economic vitality of the region.” – Dayton Mayor Nan Whaley

In a statement having absolutely nothing to do with Obama’s executive overreach, St. Louis Mayor Francis Slay said:

“Right now, our immigration system invites the best and brightest from all over the world to come and study at our top universities, including Washington University and St. Louis University, and then once they’ve gotten the training they need to build a new invention or create a new business, our system too often tells them to go back home so that other countries can reap the benefits, the new jobs, the new businesses, the new industries. It’s evidence of the broken system we have today and why we must fight to fix it.”

The case is sadly symbolic of the current state of political affairs. While liberals argue Obama’s executive overreach was for the betterment of public interest, the complaint filed by Texas and others alleges the president abused his executive powers; it’s welfare v. Constitutional limitations.

I’m tired of everyone complaining about a ‘broken immigration system’. Hogwash. Like amnesty is going to fix it? What’s broken is the gubmint’s refusal to follow and prosecute existing laws.

Our immigration system is missing the guest worker program it used to have. Ted Kennedy insisted on leaving it out, over the objections of even his own party. The objection was that people who did not intend to become citizens would come here illegally, and that is exactly what happened.

Fixing the hole in our legislation to recognize that people can and do come here just to work would go a long way toward solving our illegal immigration problem. Such a program should NOT be a route to citizenship, especially for people who came here by way of an illegal act, and therefore refused to submit themselves to our laws.

Make no mistake about it, however: the Democrats are after real amnesty, citizenship for illegal aliens.

…or you Federal stipend depends on your support.

So a buncha mayors are lame ducks?

They’re all Democrats, of course. Seems to me that ValJar had a minion reach out to the mayors and organize an amicus, and for the most predictable of reasons.

They’re spraying perfume on the corpse.

I sense billions of taxpayer dollars headed to these particular mayors, while other mayors opposed to the plan suddenly find their payments ‘delayed’ or ‘lost’ in the process.

Progressives are such bald-faced liars, they disgust me.

“public interest across the country is served clearly and overwhelmingly by implementing immigration reform by executive action,” Well Komrade, that’s why this country is a Constitutional Republic and NOT a Democracy… one block of voters isn’t so easily able to elect themselves the right to plunder another group’s earnings.

“Our mission is urgent. Delaying implementation of the President’s executive action will further hurt our families, negatively impact our economies, and create unnecessary insecurity in our communities,” And this is where the bullshit gets especially heavy. Please tell me how allowing millions of more people onto our welfare programs helps the economy? How does a secure border create insecurity?

What a bunch of %#@[email protected] liars, all of them.

The DRAT (Displace, Replace, Abort, and Tax) policy reminds me of health care “reform” that raised the poverty level, age of maturity, and taxes for everyone else. They like to create problems, ignore causes, and treat the symptoms at a profit in perpetuity. Perhaps the ball of yarns is wound so tightly that a dysfunctional convergence or “reset” is inevitable.

Meanwhile, second and third-world nations, especially where elective abortion is illegal, are ecstatic to be rid of their unwanted clumps of cells… I mean men, women, and children. And Obama is ecstatic to force demographic diversity a la French, German, Norwegian, Britain, etc. unassimilated immigrants.

Rumor has it – gun owners will pay higher premiums with Obamacare.

Ever punishing dissent is this petty petulant excuse for a potus.

Part of the long game for progressives is to force people to live in metro areas to consolidate services, etc., etc., yada yada, but also to get people completely dependent on the government for more than just monthly checks. Transportation would be controlled by government (which is one reason why Al Gore suggests idiot ideas like banning personal vehicles). The Mitt Equation says 47% of Americans won’t vote against their government-stuffed wallets. The percentage within a large American city is way higher.

Think about what fun it would be to have to pass inspection by the TSA komando before boarding your bus or train…!!!

Why, you could ride in perfect safety, knowing that nobody around you had more than 1.5 oz. of high explosives!

PLUS, packed like sardines, you would have any blast absorbed by the reeking bodies of your fellow proles!

It is not about us, comrade. It is about what is good for the Collective.

I often wonder why these people despise citizens. I have to remind myself that money and power are more important to them than the United States of America and the interests of citizens they pretend to represent.

arrest and deport ALL illegal aliens…

and send their anchor babies back home with them.

In terms of tactical day-to-day implementation that would be the expensive way to do it.

We hear, “you can’t deport all of them!” which would, in fact, be difficult. But I would add this to your 1 & 2: Establish the equivalent of a bench warrant for any identified, known illegal (like those overstaying work visas), and arrest & deport protocols for illegals authorities happen upon in pursuit of other duties (you know, sort of like an Immigration Agency would do if we had one, /sarc). I call it attritional deportation. Slowly but surely illegals get picked up and deported whenever authorities have reason to run their names in the various government databases (NCIC, etc.). Within, say, ten years, I’d bet half will have been caught and deported. No man – nor illegal immigrant – is an island, especially in the database-drunk USA. Mr. Obama has provided us a starting database – the Obamacare rolls.

Henry, we’ve been dealing with illegal immigration without solution since the Reagan administration at least! It’s hard work! We don’t have time for your ten year plans!

They all need deported, immediately. And the upcoming Article V convention should conclusively eliminate birthright citizenship. As I interpret it, that is not what the constitution provides anyway, but since the clowns in the government act that way, it needs to be made clear.

“[T]he mayoral amicus brief states that, “public interest across the country is served clearly and overwhelmingly by implementing immigration reform by executive action,” according to a statement released from de Blasio’s office.”

As I said on the previous article, which discussed the states whose governments support “immigration reform by executive action”, this line of thinking is irrelevant.

It doesn’t matter if the “public interest” is served by the President’s executive action. Not. One. Bit.

What is at issue is whether the President has the authority to take such unilateral action, bypassing Congress and usurping Congressional authority. Period. Full stop. Whose good it serves – or whether it serves any good at all – are completely and entirely irrelevant.

The states bringing the lawsuit will need to resist arguing this issue on their opponents’ terms. It’s not a question of whether the “public interest” is served; it’s a question of illegal and unconstitutional seizure of power.

Most if not all of these big city mayors are Democrats, Many are far Left (read radical) Democrats, a few are Communists or what we used to call “Fellow Travelers” back in the day. Are we really surprised that they back Obama’s illegal expansion of Executive Power(read dictatorial) and are eager to reap some Federal benefits for their poorly run city governments.

Kasim Reed is the Atlanta mayor. He’s black. I’m sure his constituents – primarly black! – don’t know he’s so anxious to throw them under the bus for the new constituency his party wants to claim.