Something smells in Pasadena, and it’s not the roses. 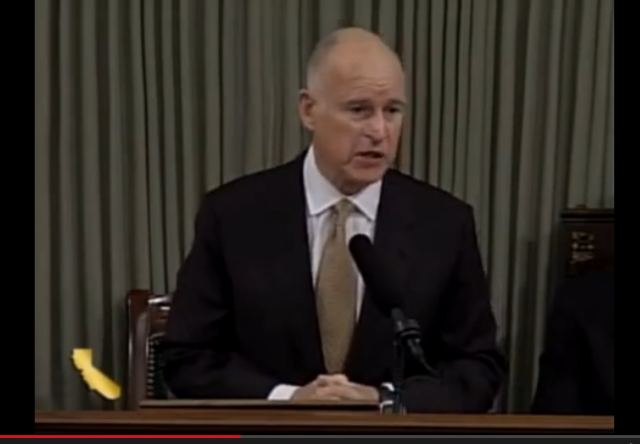 Californians are starting 2015 with a fresh round of new taxes, and the inauguration of Democrat Jerry Brown for an unprecedented fourth term as California’s governor.

As part of his inaugural address, Brown derided critics of the state’s current economy, and conjured up a fantasy of balanced budgets and robust employment.

“We are at a crossroads,” Brown said in his inaugural address. “With big and important new programs now launched and the budget carefully balanced, the challenge is to build for the future, not steal from it, to live within our means and to keep California ever golden and creative, as our forebears have shown and our descendents would expect.”

However, the true fiscal picture for the Golden State is a little less dreamy:

To Brown, et al, the budget is balanced because it provides enough money to pay the obligations that he and the Legislature choose to pay. But when what they choose not to pay is included, the budget is billions, even tens of billions, of dollars out of balance.
They choose, for instance, not to include a $70-plus billion shortfall in the trust fund that pays teachers’ pensions. The California State Teachers’ Retirement System says it needs another $4.5 billion a year to cover the unfunded liability that’s growing by $20 million a day.

…They also choose not to include a $60-plus billion unfunded liability for the health care of retired state employees and there’s really no way for that debt to be shared. It will be paid, sooner or later, from the state budget – and it, too, is growing by the day.

The drafters of the budget also chose to not include “embezzlement” in their calculations. Legal Insurrection readers may recall what happened in Bell, California, where officials were caught misappropriating $5.5 million from the city in a scandal that the Los Angles Times deemed “corruption on steroids”. Now, the city that hosts New Year’s Day’s famous “Tournament of Roses” is in the midst of an even bigger scandal.

Danny Ray Wooten, 51, a preacher, and a former management analyst in the city’s Department of Public Works, was arrested with Tyrone Collins, 55, and Melody Jenkins, 46, a onetime assistant to Wooten. The three are named in a 60-count felony complaint. The allegations include embezzlement, conflict of interest and grand theft.

Twisting the knife in the heart of the citizenry a little deeper, it turns out Wooten… was a pastor.

Danny Ray Wooten, a Pomona preacher accused of embezzling from Pasadena City Hall, where he was employed, has been stripped of his parsonage, the local head of his denomination said Monday.

…The Southern California Evangelistic Jurisdiction has also begun an audit of its funds to determine if the organization has been scammed in any way.

Perhaps Brown has also conveniently forgotten about all the influential politicians in Sacramento who have been indicted for corruption?

In another portion of his inaugural address, Brown crows about one million new jobs in the state. However, a closer look at the employment numbers reveals that those positions did not make up for those lost during this “recovery”.

Officially, California’s unemployment rate was 12.3 percent for July, the latest month calculated. That’s bad enough. But the real number is twice as much: at least 25 percent, a Great Depression level…. The U-6 number for California, for the latest year covered, was 21.9 percent. So, it’s 9.9 percentage points higher that the U-3 number — nearly double the official rate…

Perhaps next year, our Governor can participate as part of a “Fantasy Float” in the famous Pasadena parade. He is certainly well-suited for it.

A question for LI:
If I set up a business in California and promised a pension to my employees and then didn’t fund that pension plan, would that be a crime?

There, in a nutshell, is the problem with California. The local papers do not report, and the local citizens are incurious. The link just above makes it abundantly clear that this was a situation that went on for years, where a person embezzled funds by passing fake invoices. An audit should catch something like this.

In my opinion, this the the result of too many years of one-party rule. It probably does not matter which party.

Audits should catch a lot, but often the auditors get too cozy with those they are auditing. It isn’t that they become corrupt themselves (for the most part), but they fall into a routine. So when the first year’s invoices were reconciled, and the forgeries not noticed, that became more or less a baseline of corruption. The auditors’ attention won’t be drawn to any expense that is reasonably close to what was spent on it the year before. And so it goes.

Sometimes, they are even snowed by BS arguments, like Skillings’ scam at Enron. Enron was crawling with Arthur Anderson auditor and IRS accountants – over a thousand on site! – yet they all swallowed the idea that you can create current capitalization by trading enough futures. Once they accepted the principle, the fact that the contracts were worthless was overlooked entirely.

This Greatest Depression E’vah (of Obama’s) is forcing even government embezzlers to cut back!

The only people who can force a state to comply with its own constitution are its voters and its supreme court. With courts filled with Democratic judges, and voters anxious for the freebies Democratic officeholders offer, the house of cards won’t collapse until the revenue shortfalls can’t be covered by issuing new debt.

They’ll just go to the Feds, like Mass did over their Romneycare expenses.

I want to pass a proposition that will guarantee pensions and other retirement funds are funded. Every year a person works the person who pays for the pension as to purchase an annuity that pays for that years accumulated pension. No more pretending that their going to get insane RTI for pension investments.

This will reduce the ability of politicians to promise huge pensions in the future and not pay for them in the present. We should have no unfunded pension liabilities if this passes.

As a 30 year resident of both SoCal and NoCal I have been surprised at the virtual disappearance of the GOP from state offices. The GOP has disappeared from the urban areas almost completely. Nobody in those areas care at all about GOP ideas and would never consider voting GOP. So the Dem ship of state rolls on, untroubled by corruption, malfeasance, criminality. Its as close to a one party state as is possible in America.

Fantasy Float? Sounds like a perfect fit for Governor Moonbeam.

If you torture numbers enough, they’ll tell you anything.

“We are at a crossroads…”

Yes, the only place where you can get hit by a semi truck from all directions at the same time.

Indat the place you go to sell your soul to the Devil…???

Six of Pasadena’s city councilmen are Democrats.
The seventh is probably a Boehner.

they must be really smoking up the ganja in cali to keep reelecting this dope head who has ran this state into the sewer.