Amnesty for all the cupcakes!

Amnesty for all the cupcakes! 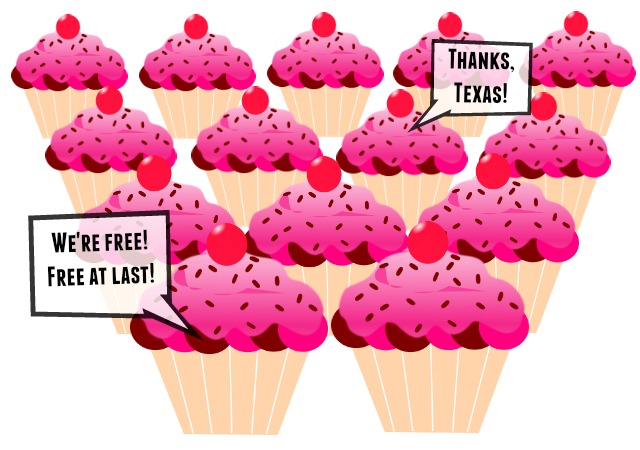 “I’m announcing that I am giving full amnesty to the cupcakes in Texas. I’m also granting full pardon to pies and cookies and brownies and cakes and homemade candies,” Miller said in his announcement.

In Texas, the Department of Agriculture administers the school lunch program responsible for restrictive dietary guidelines. Guidelines were put in place to combat childhood obesity, but as Miller points out, the figures haven’t changed in the ten years stringent dietary restrictions have been in place.

“We’re getting out of the school mandate business,” Miller said.

“We’re hoping the federal government can take a lesson from what we’re doing here in Texas because the federal childhood nutritional program is a huge failure. We had over a million kids drop out of the program last year across the United States. We threw away over a billion dollars of food, and that’s tax payer dollars.”

good news for the cupcakes…. now they can start immigrating into other states 🙂

Actually, Texas granted amnesty to cupcakes way back in 2005.

In the early 2000s, then Texas Agricultural Commissioner Susan Combs banned junk food of all kinds from schools. Schools that failed to follow these strict guidelines were subject to fines.

Parents and teachers started a protest movement because the ban no longer allowed parents to bring birthday cupcakes to their children’s classrooms. The uproar led the Texas legislature to create the Safe Cupcake Amendment in 2005.

I assume that Sid Miller’s new directive restores full rights to cupcakes (no longer restricted to classroom birthday parties) as well as other goodies.