The upcoming Israeli election is a referendum on the Prime Minister, not a struggle for the soul of the country 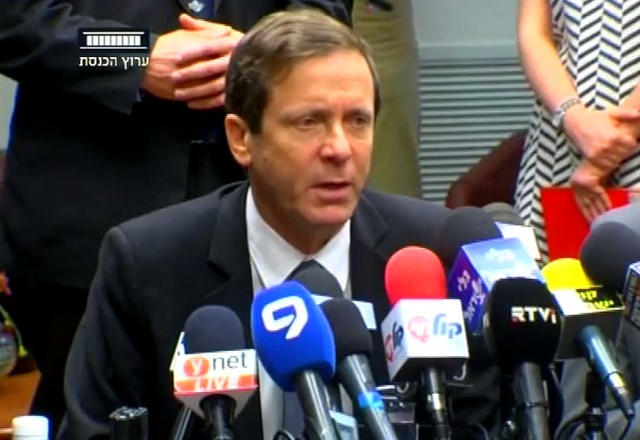 Following the dissolution of the Israeli government this week, Labor Party leader Isaac Herzog and Hatnua leader Tzipi Livni agreed to join forces in an effort to unseat Likud as the governing party.

At The Times of Israel Haviv Rettig Gur wrote a positive analysis of the merger, arguing that in bringing Livni on board Herzog aimed to capture the center of the Israeli electorate, rather than ceding it to Likud.

Yet Israel’s political center is actually far larger than the parties who formally declare themselves to be “centrist.” On the key issue that defines the left-right axis, Palestinian statehood, polls have shown that as many as half of those who vote for the explicitly right-wing parties Likud, Yisrael Beytenu and even Jewish Home actually support Palestinian statehood. Countless polls suggest that Israeli centrists – usually defined by pundits as those who support Palestinian independence while distrusting Palestinian willingness to reciprocate with peace – vote for the right because they hear their skepticism reflected in the rhetoric of right-wing leaders.

For 20 years, Herzog’s predecessors – Labor has seen 11 leadership changes in 22 years – have been fighting a losing battle against this vast, inchoate center.

But on Wednesday night, Herzog launched the left’s most dramatic bid since the 1990s for the Israeli center’s trust.

Herzog, according to Gur, no longer talks about “peace and reconciliation” but of “separation.”

There are two assumptions to Gur’s analysis here that I’m skeptical about.

The first is that Livni is viewed as a centrist. Livni joined the current government in order to revive the peace process and was the government’s lead negotiator with the Palestinians. These are hardly credentials that scream out “centrist.” As Gur observed, Israel’s left-right axis is generally defined in terms of the peace process and on those terms Livni is solidly on the left.

The second is Herzog’s talk of separation. That’s hardly a program. He will still have to define how he will approach the Palestinians. Will he be more conciliatory towards them than Netanyahu? If so then how is he a centrist?

And even if Gur’s assumption that Herzog is attempting to capture the Israeli center is correct, hasn’t the electorate shifted to the right? Israelis don’t view Mahmoud Abbas as a peace partner. They’re aware of his incitement and his unity government with Hamas.

Maybe this partnership will be successful, but given what I’ve seen so far, I don’t see that it’s changed much. The latest snap poll showed the Labor-Hatnuah party with a plurality over Likud, but in late 2012 when Likud and Yisrael Beiteinu merged the combined party had 42 seats and looked like a powerhouse. Likud-Beiteinu ended up with just 31 seats.

There are three months until elections. The polls will be up and down until then. It’s too early to say that this merger represents a game change. I wouldn’t be surprised if Netanyahu loses power this election simply because he’s been Prime Minister for nearly six years now and without any overriding issue, the election will largely be a referendum on him. Netanyahu won’t lose because of the political maneuvering of his opponents.

In a column for Israel Hayom, David M. Weinberg demystified the upcoming elections:

The overwrought rhetoric and fanciful promises are claptrap because the contours of future Israeli diplomatic, economic and military policy are relatively constricted by the realities of the times – including regional instability, the fickleness and fecklessness of Israel’s Palestinian neighbors, difficult economic forecasts, and the vagaries of coalition politics. The actual differences in policy between a Netanyahu-led coalition government and, say, a Herzog-led coalition government, are likely to be more cosmetic than real.

The current election campaign, rather, is more a personality contest than anything else. It’s a referendum on Netanyahu’s appeal versus that of the newest Israeli messiah, Moshe Kachlon. It’s a plebiscite on the puffed-up (and mostly empty) political resumes of people like Yair Lapid. It’s a chance to pronounce on the preening ambitions and inflated self-image of Tzipi Livni – a political vagabond who has just switched political frameworks for the fourth time in ten years. It’s a poll on the suitability of Naftali Bennett for higher office.

Still, his opponents need to define themselves on some issue (as Yair Lapid did last time in terms of the economy) and not just look for a position in the political spectrum.

Time will tell what the voters of Israel want but I’m sure Obama would love to see Tzipi Livni and her waffling co-hort Isaac Herzog unseat Bibi.

I would support Palestinian statehood, if that would resolve the problem. It will not. The Palestinians do not want a state: they want to destroy Israel.

Please stop calling this coalition center-left. That is as absurd as the NYT calling itself centrist. More precisely, it is a far-left – not-so-far-left coalition.

If dealing with the Palestinians is how we define the left-right spectrum in Israel (and not economic policies) I don’t believe that Herzog or Livni would be much different from Netanyahu. Any Jewish party advocating more concessions (like Meretz) would be marginal at best. They can only talk of a change in tone, maybe. But substantively they will be pretty close to where Netanyahu is.

And what are they going to do? Surrender to the PLO?

They’ve already said they won’t negotiate. They won’t recognize Israel. How can they go in and try to negotiate with anyone with that attitude.

Any Israeli that thinks negotiation can work after 60 years of bloodshed and refusal on the Palis part to negotiate in good faith is insane.

Israel should know Obama does not have its interests at heart, and that he would like nothing better that to see Bibi, who has not allowed Obama to get away with lies, defeated.

America won’t get another chance to send Obama a message, but Israel has one now.

Didn’t the Clinton Administration work hard to get rid of Bibi?

davod – in the end they helped undermine him enough to lose to Barak in 1999. A little more than a year later Arafat launched the second intifada.

If this is a referendum on Netanyahu, then what happens if he’s unseated from within? Is Feiglin challenging him again? Saar? Anyone? If he’s no longer the Likud leader, then the referendum is over, and it becomes an election. Any chance of that happening?

Netanyahu looks pretty secure within his own party and rescheduled the primary to further undermine Saar, in case he chooses to return to politics.