Why can’t we have a “conversation” about militant Islam?

Why can’t we have a “conversation” about militant Islam?

“The conversation about militant Islam has been systematically repressed.” 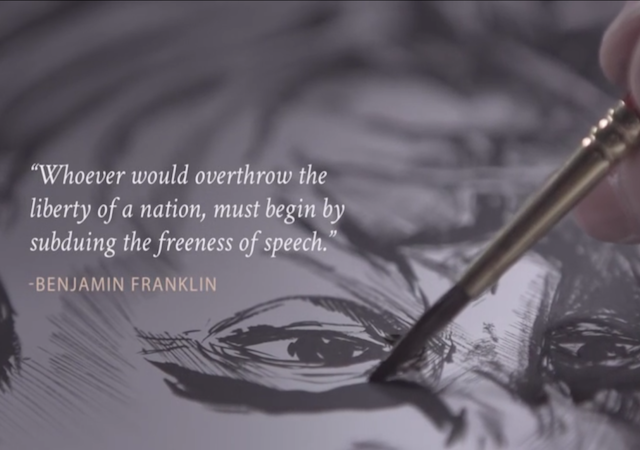 If you’re paying attention to what the mainstream media is selling, you know that when it comes to militant Islam, the world has a big censorship problem.

The Lawfare Project just released a new video that offers up a laundry list of examples of times when the criticism and discussion of radical Islam has been censored, repressed, or fought via “lawfare.”

I think Lawfare has an excellent point; right now, we’re in the middle of the annual “War on Christmas,” in which the entire country (world? probably) “has a conversation” about the propriety of hosting a Nativity scene during a holiday season that celebrates the Nativity.

By “conversation,” of course, we mean “conversation about how best to push religious expression into the shadows (unless it involves the Koran, in which case, rock on.)”

I don’t think we’ll ever win the war against censorship—they’ll keep trying, and we’ll keep fighting to have our voices heard. But the key to make sure the world hears the voices of those radical Islam has touched is to keep speaking.

Our government’s actions, as such, and its MSM arm are not successful in preventing many of us from knowing the facts, on the ground.

Obama’s minions know that we also get much information from alternatives to the Alphabet soup networks, especially the interweb.

IMHO, the result has been that only true Democrat sycophants believe the tripe they shovel.

You just earned a place in tomorrow’s Two Minute Hate…

My daughter is in 7th grade in CA public school. Just spent a month covering Islam in her history class. She knew full well about Mo’s marriage to to his older wife but nothing about his marriage to Aisha (sp). Wonder why?

The class also took great pains to emphasize muslim historical contributions to world knowledge with no mention or discussion about why there has been an absolute dearth of recent (within the last 400 years!) contributions.

To be fair though, the class did spend 1 hour discussing Christian history as well.

“muslim historical contributions”…could that be a Big Lie?

No, they have made many terror contributions. Or, maybe you had something else in mind, of which, there really aren’t any.

Yeah, there were. The question is whether these were BECAUSE of Islam, in spite of Islam, or neutral.

That is, Arab city states DID provide a cultural place where medicine, law and astronomy COULD and DID flourish. They also, by virtue of being prolific traders, came across Greek and Indic philosophy, science and mathematics. They preserved much that would have been lost, and they advanced some of what they learned. They were less the spark than the conduit. But they were the conduit.

To be fair though, the class did spend 1 hour discussing Christian history as well.

Let me guess, The Crusades, The Spanish Inquisition, and Salem Witch Trials.

I’ve always found it difficult to have a ‘conversation’ with someone who wants to kill me because they believe my very existence to be a blight.

good one, shared on my end too
http://www.theconservativevoices.com/media/cat/political/the-right-fights-back/dont-let-the-islamophobia-industry-silence-you-r865
credited LI for finding it of course

The prog fascination with radical Muslims is easily understandable given the prog predilection towards fascist control. Progs want to eliminate free speech in this country, so you can imagine what a tingle-up-the-leg they get looking at a group that says they’ll cut your damn head right off if you disagree!

Pyramidal, centralized government control, including control of all media, the leader creates or abandons laws entirely at will, a single acceptable set of beliefs controls all aspects of socio-political construction, plus institutionalized corruption where a taste of every little deal gets sent upwards to leaders, just like the mafia, not coincidentally another fascist organization.

Why can’t we acknowledge that “militant Islam” and “radical Islam” are actually orthodox Islam? A large majority of Muslims worldwide agree with propositions that are often placed in the “radical” category, such as the death penalty for apostasy.

A modest familiarity with the “prophet” (aka “the perfect man”) and the core texts of Islam and the dominant pattern of Islamic history leaves no doubt that Islam at its heart is militant and violently intolerant. Just consider how easily a crowd of average Muslims gets into a murderous frenzy over rumors of “blasphemy.”

Right here in America, a regular, non-terrorist Muslim called the cops on a friend of mine, and then sputtered to me that my friend had uttered “blasphemy!!” I said we have no blasphemy laws here. He said, “Oh, that’s right.” Cop arrived and the muslim told a preposterous tale about my friend threatening him. It was clear to me that he really wanted the police to punish my friend for “blasphemy!!!”

I just saw a video of a Muslima getting unhinged and attacking a man because he uttered the Islamically supported truth that “Mohammed was a pedophile.” That was right after she loudly objected to his temerity in tying Islam to violence and incivility.

“I just saw a video of a Muslima getting unhinged and attacking a man because he uttered the Islamically supported truth that “Mohammed was a pedophile.”

That’s because Muslims believe Islamic law applies everywhere and to everyone. That statement is implicitly a criticism of Muhammad, which is blasphemous according to Islam. Since that is punishable by death, and any subject of the Islamic state may execute blasphemers and heretics sua sponte, of course said Muslima attacked him.

The Terrorists are the true Muslims. They are following the commands of the Prophet Mohammed to spread the faith by the sword of conquest. It is the “peaceful Muslims” who are apostates.