Who’s up for another IRS scandal?

Who’s up for another IRS scandal? 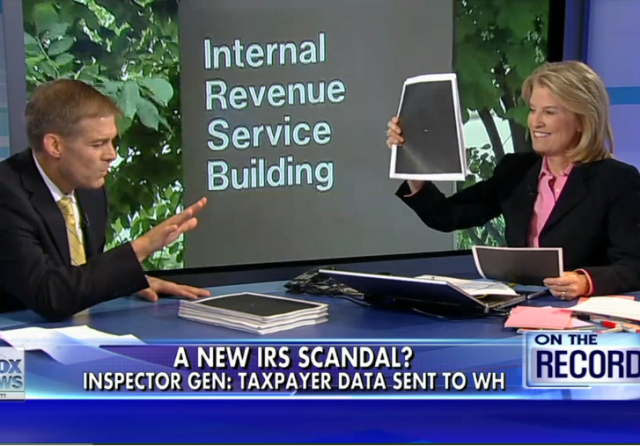 Would it surprise you to learn that the IRS shared confidential taxpayer information with the White House?

Video courtesy of the Gretawire blog:

Not to worry America. We’re living under the most transparent administration in American history. Or maybe not.

Paul Bedard of the Washington Examiner:

Less than a week after ’fessing up that it found some 2,500 documents potentially showing that the IRS shared taxpayer returns with the White House, the Obama administration has reversed course and won’t release the trove to a group suing for access.

In an abrupt decision, the Treasury inspector general’s office said that the documents are covered by privacy and disclosure laws and can’t be provided to Cause of Action, despite a promise last week to hand over some 2,500.

The decision coincides with publication by the Washington Examiner this week of “Watchdogs, lapdogs and attack dogs,” a four-part series examining the successes and failures of the inspectors-general system, including multiple instances in which IGs provided cover for agency managers seeking to avoid more rigorous evaluations.

Keep obsessing about Ferguson, America. Nothing to see here.

The IRS sent me a letter stating I owed ~ $74. I agreed with $4 but not the additional $70. I paid the $74 nonetheless but asked them thrice about the $70 – asking them to show me my error. I received a form letter saying they needed another 45-days to get back to me. That was over 3 months ago. Nothing since then.

Apparently they are too busy providing docs to 0B0LA to respond to my legitimate request.

I refuse to comment on this thread on the grounds that they might investigate me on the behest of the POTUS and/or his lackeys.

The IRS and the inspector general do not work for us, they work for Obama. That’s another one of those new rules. It does no good to have a majority, or even a GOP President, if they do not deal with this insidious, corrupted infrastructure run by Democrats. It stinks up our whole form of government.

I was thinking that myself – life long bureaucrats, seemingly regular Americans, had to carry out those orders knowing they were illegal.

They did – and said nothing.

I have to wonder if Mitt Romney’s name might have been one of the names delivered?

The truth of the matter is that the media has known about Obama ordering up tax information on his enemies & friends for whom his relationships had become problematic since the begining of this. Going back to the first reports of criminality at the IRS there were reports of taxpayer data being leaked to the White House, the DNC & militant factions of the many communist front groups financed by George Soros. These incidents went largely unreported. The judge who heard the case against Lois Learner & the IRS made the ruling that (paraphrased quote) ” The IRS has come a long way in cleaning up its act. Ms. Learner can not be held responsible for the acts of a few political zealots (her co-conspirators remain nameless & non quantified to this day). Basically no one was hurt so no harm no foul”..
What took place was an ochestrated voilation of criminal & civil law which led to numerous counts of assault, menacing, invasion of legally protected privacy & a violation of civil rights. The Tea Party Group & its sister organization were attacked several times by heavily armed masked federal agents. No one asks who were these agents? Other than BATF & FBI no one has asked who were they? Which branch office did they come from? Which judge issued the warrants needed for the 5 raids inflicted on True the Vote & The Texas Tea Party? Why have NONE of these agents been questioned by Congress? Why have no warrants been issued for the ” few political zealots” of the Ohio IRS office? Why have they all not been perpwalked into Congress to answer these questions?
When socialist/communist gain authority abuse of power, intimidation & publicly seen murder are the tools of the trade. The members of Congress & the Obama appointed judge who allowed Lois Learner to go free while failing to bring in her coconspirators are all culpable in attack on the soveriegnity of America. It played just the way they wanted it to. What good is intimidating a single office of the Tea Party when you can use gestapo tactics & a pliant media to intimidate them all. By violating every law, code of ethics & civil rights & doing it publicly, then to be shown getting away with it. The Obamunists have insured that no one else will have the courage to start another conservative group or apply for 501-C tax status. That is unless they are groups of raging communist, those groups are fast tracked through.
Our Judicial system is broken! This whole dog & pony show of a Congressional inquiry & subsequent trial which exonerated Learner only goes to prove it. That too is a long term goal of the Obamunist an eclectic band of enemies of America. When the people no longer trust or expect justice from the courts, when the courts are used to exonerate Obama’s allies & punish those who have politically opposed Obama, then the courts no longer matter. Except as an instrument of communist rule.
I pray America wakes up to understand the systematic destruction of every bulwork of our freedoms. Obama & the George Soros backed communists are using every tactic that has ever been used to destroy a democracy. The evidence is becoming obvious to even those who don’t pay attention to the “news”. This nation is devolving into a brutal communist run regime, which every day shows similarities to other historical socialistic/ communist regimes. Worthy of Stalin, Hitler, Musilini, Pol Pot or Kim Il Jung.
I’m reminded of the recent events in Ukraine, when the people there decided they were tired of communist rule. It only took 15,000 of them to storm their White House to run their communist dictator out of the country. Only 82 heros of democracy were killed that day. Was the communist leader in the Ukraine any less protected than Obama? Were the windows of his mansion not also bullet proofed? Did he not have armed gaurds at every door, snipers on his roof & an army on the lawn? Well yes he did but, when the people demand their freedom those things are inconsequential. Obama should be careful as he tries to whip up unrest & riots using his well paid professional agitators. They are masters at sowing unrest but, once that riots out of the tube you can’t put it back in. America’s black population is as tired as the rest of us when it comes to Obama’s lawlessness & his unrelenting attack on democracy & freedom. Once every black family I know had posters of Obama up right next to Jesus. They are steadily throwing them out & asking themselves ” what the hell was I thinking?” When blacks in ALABAMA. Are calling Obama a muslim communist & asking me why he can’t be thrown out of office the civil war Obama is trying to start could very well turn against him. God willing it will.

Anyone taking bets on John Roberts name being in the stack?

I’ll say it again. Nixon was a cub scout.

Well, no, Nixon was no cub scout!

However, your point is well taken. Might it be that, relatively speaking, of course, that Obama is the King of Capo de Capos and Nixon was a minor neighborhood loose cannon.

Of course, the real problem is a tax code so pernicious that it invites this kind of abuse.

Time to BURN IT DOWN.

Conspiracy to commit arson to the terror of the people! Does LI have a sergeant-at-arms?

We do not need more laws when he administration is already ignoring the ones on the books.

This is big… and I was amazed at yesterdays entry on it.

If only we lived in a country with a free press that would report on such things.

Last night I was pondering how it is that the media can drone on for weeks with blatant lies about Ferguson and still be on the air. Then I was swallowed by a sinking feeling that a large majority of the country actually is that stupid.

None of us is as stupid as all of us, ginned up as a lynch mob marching to a false narrative.

Hello to all the readers from the IRS reading this entry. Yes be very afraid of the small group of Americans commenting and reading this blog. While you get paid to terrorize law abiding citizens, we chase you for free. When you are out of a job, your means of terrorizing us has been eliminated. See how that works?

I for one welcome our new IRS overlords.

This is the same administration that thinks it should be given more money to to train/federalize our local police. I wonder if it ever heard of teaching by example.