Who Wins the Award for Best Bombing of Iraq?

Who Wins the Award for Best Bombing of Iraq? 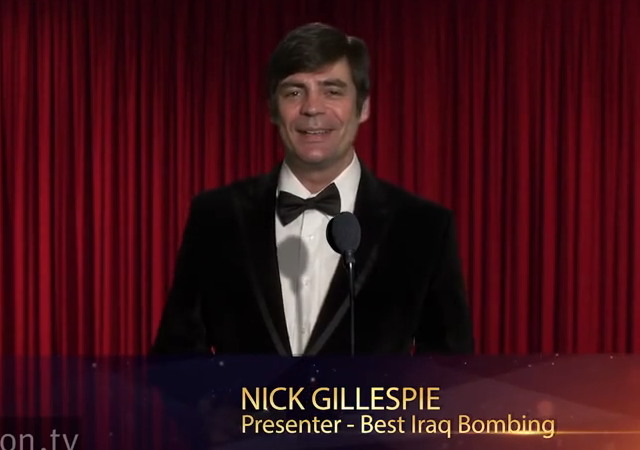 Nick Gillespie of the famed Libertarian magazine Reason is a pretty funny guy. In a new video from Reason TV, Gillespie plays host of the “Military Industrial Complex Awards” to hand out the prize for best bombing of Iraq.

Which of the last four presidents will win? All of them have bombed Iraq so the competition is pretty stiff. I don’t think war is a laughing matter and I don’t believe the folks at Reason do either but humor is used as a tool to make a point in this case.

As a center of Libertarian thought, Reason has opposed Republicans and Democrats on foreign policy and many other issues. In a testament to their tradition of equal opportunity criticism, I really didn’t know who was going to win the award before watching the video.

Take it away, Nick.

Did I hear Bill Clinton say America was going to bomb the nuclear, chemical, and biological weapons of mass destruction in Iraq? Wait, what???

The Clinton Administration had run a resolution through Congress that called for ‘regime change in Iraq’, and was voted in by most of the Democrat hypocrites who later stabbed GW Bush in the back for the Iraq invasion which they also voted for.

Of course, during the six-year media hatefest against GW Bush, that resolution and those votes would have been progressive heresy to notice, and were never heard of by the public that hatefest was designed to influence.

bush 1 did a pretty good job bombing them. clinton did a good strike too (93 iirc) against iraq intelligence headquarters (tomahawks iirc) after finding out saddam involved in the kuwait attempt to assassinate bush senior.

I’m actually not surprised really. Obama has projected such weakness that he has had to bomb the country pretty much continuously in a vain effort to prove foreign powers should pay attention to him.

If you wish for war, prepare for peace.

In total, the 70-hour campaign saw U.S. forces strike 85 percent of their targets, 75 percent of which were considered “highly effective” strikes.

More than 600 sorties were flown by more than 300 combat and support aircraft, and 600 air dropped munitions were employed, including 90 air launched cruise missiles and 325 Tomahawk land attack missiles (TLAM).

Operation DESERT FOX inflicted serious damage to Iraq’s missile development program, although its effects on any WMD program were not clear.

Nevertheless, Operation DESERT FOX was the largest strike against Iraq since the 1990-1991 Persian Gulf War, until the commencement of Operation IRAQI FREEDOM.