We’ve failed our troops, and horribly

We’ve failed our troops, and horribly

Our troops are experiencing a severe morale deficit 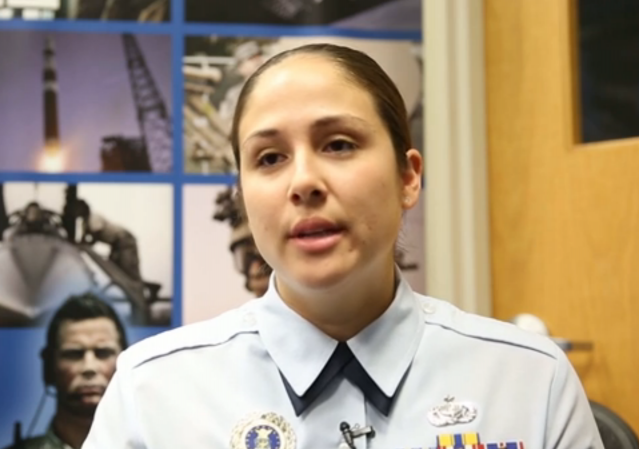 The Military Times released what will be the first installment of several on the state of our military.

Presidential indecision over whether to deploy to or withdraw from Iraq and Afghanistan has fostered an aura of uncertainty. An entire federal agency devoted to our veterans embroiled in scandal and negligence certainly doesn’t send the signal that Washington cares about the fate of the brave.

Morale is dwindling and unsurprisingly so:

Today, however, that gratitude seems to be dwindling. The services have weathered several years of deep cuts in funding and tens of thousands of troops have been unceremoniously given the boot. Many still in uniform and seeking to retire from the military fear the same fate, as those cuts are not yet complete.

A Military Times survey of 2,300 active-duty troops found morale indicators on the decline in nearly every aspect of military life. Troops report significantly lower overall job satisfaction, diminished respect for their superiors, and a declining interest in re-enlistment now compared to just five years ago.

Today’s service members say they feel underpaid, under-equipped and under-appreciated, the survey data show. After 13 years of war, the all-volunteer military is entering an era fraught with uncertainty and a growing sense that the force has been left adrift.

One trend to emerge from the annual Military Times survey is “that the mission mattered more to the military than to the civilian,” said Peter Feaver, a political science professor at Duke University who studies the military. “For the civilian world, it might have been easier to psychologically move on and say, ‘Well, we are cutting our losses.’ But the military feels very differently. Those losses have names and faces attached to [them].”

Look at how dramatically morale has shifted in the last five years: 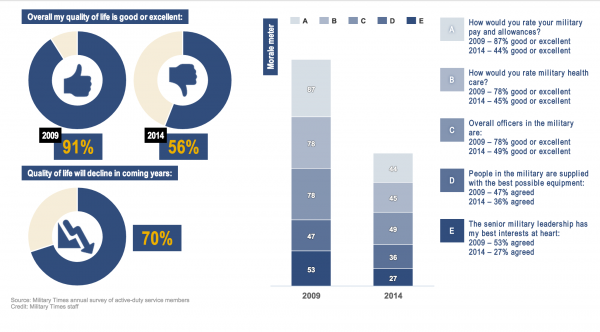 Uncertainty about what’s next, and a complete lack of vision, plan, or value all seem to be at the core of declining morale:

A Navy aviation machinist’s mate first class based in El Centro, California, said operational budget cuts left him and fellow sailors cannibalizing working parts from other aircraft entering phased maintenance so they could repair higher-priority broken jets. Even uniforms are in short supply, he said, as the Navy embarks on what could be a decade of scrimping under sequestration.

“We are on the bare necessities and sometimes not even that. For example, I need new boots but they’ll ask me, ‘How long can you stretch that?'” he said.

But with jobs few and far between, many of our troops endure pay and benefit cuts for one simple reason: there are no opportunities in the private sector:

Many of them hang on only because prospects for good civilian jobs have been dismal for many years. And often those who do land good jobs on the outside are those the military can least afford to lose.

To add insult to injury, we’ve cut pay, cut raises, and expect service members to make up the difference:

Troops today are pocketing far smaller annual pay raises. The 2014 bump of just 1 percent was the smallest in the 41-year history of the all-volunteer force. That compares with 3.9 percent in 2009 — and 6.9 percent in 2002. Congress may well vote to authorize just another 1 percent in 2015. In the best-case scenario, that might go to 1.8 percent.

On top of that, the once-vast pool of cash that flowed directly into service members’ pockets in the form of combat pays and re-enlistment bonuses has dried up. In 2014, troops received $3.8 billion in special pays and incentive pays, down from $6.1 billion, adjusted for inflation, in 2003, according to VisualDoD, a company that tracks Pentagon spending. For 2015, that budget is expected to fall to $3.5 billion.

And looking ahead, many military families see a future filled with uncertainty. They worry about the Defense Department’s new plan to cut housing allowance rates, which would amount to a direct pay cut for most troops who live off post. The newly minted 2015 defense authorization bill mandates that future allowance rates cover an average of only 99 percent of troops’ housing costs, not the traditional 100 percent. Service members would have to cover that 1 percent shortfall out of pocket.

But the chief complaint? Trouble getting a doctor’s appointment. Out of control bureaucracy is putting the our service men and women in danger.

A Pentagon review of the military health system published in October found most military hospitals and clinics meet Defense Department standards for appointment wait times — 24 hours for an urgent care visit, a week for routine care and four weeks for a specialty appointment. But DoD patient surveys, as well as the Military Times poll, tell a different story: Patients don’t think they can get timely appointments, even if they’re on active duty and have access to sick call.

“The bottom line is the Army health care system is broken and ineffective,” said one Army noncommissioned officer who asked not to be identified. He said he can’t go to sick call because of his work hours and can’t get an appointment with his primary care doctor, who is the most popular physician at the Presidio of Monterey clinic in California.

“I have gone to urgent care more in the last six months than I have [to] my own provider, and I almost consider them my new primary care physician,” the Army NCO said.

Have a tumor in your foot? Hope you’re prepared to wait two years for treatment:

Navy Lt. Nathan Deunk described the doctors and corpsmen he sees at Portsmouth Naval Hospital in Virginia as “dedicated professionals who do their best to care for their military patients.” But their patient load, he said, is overwhelming, and trying to get an appointment is “frustrating.” Deunk has spent 23 months trying to get treatment for a tumor in his foot.

The service surgeons general have said they are investigating disparities between the facilities’ reported wait times and negative feedback from patients.

Some leaders wonder whether the official data on wait times reflect the reality experienced by military patients.

We must do better for the men and women who willingly sacrifice for us. The current state of affairs falls well short of acceptable.

This news will no doubt make Obama’s day. He will no-doubt light up a smoke, pour a stiff one, give the flag his middle finger, and LOL.

“They’re right. Nothing is too good for the troops!” has been a commonplace among military members since before Vietnam. And, sadly, pretty much true.

It will always be true because the only important battles the senior staff fight are among themselves.

You are absolutely correct. Battlefield survival has a completely different meaning if you are an O-4 or above.

When it comes to funding, the Coast Guard has always been the “red-headed stepchild” of the military. It’s a damned shame that one of their highly unofficial mottoes has become a forced reality for all the services:

We have done so much, for so long, with so little, that we are now qualified to do anything, with nothing, forever!

If things don’t change very soon, we may find ourselves in the situation described by Heinlein: “The most expensive thing in the world is a second-best military establishment; good, but not good enough to win.”

When I left active duty in 2012, morale was already incredibly low.

Obama was poised to piss away everything we had shed blood ,sweat and tears for in Iraq, and Afghanistan had no defined mission and only existed so Obama could play pretend for the cameras that he gave 2 shits about fighting terrorism. Now two years later we’ve watched AL QAEDA – not this ISIS bullshit, its nothing but AL QAEDA renamed – re-emerge even stronger than they were before because of the lack of spine to do anything meaningful.

The VA scandal brought to light something that every single veteran knew – that the staff in hospitals straight up LIED about veteran care.

Have you heard of a single person filing false reports being fired? Fuck no. They all still have their jobs. And they’re doing the same shit right now, hiding wait times, filing straight up lies about patients.

The worst part is the budgets. Commands and the military waste MASSIVE amounts of money – through no fault of the troops or commanders – due to the absolutely idiotic policy of ‘use it or lose it’.

For those of you that don’t know, ‘use it or lose it’ is the retarded policy of a large number of government departments. It literally means that if you don’t spend your entire budget, regardless of reasons, your budget for next year is reduced to what you did spend. You are literally PUNISHED for coming in under budget.

What does this generate? Around the July-August time frame, every unit in the military suddenly empties their budget on the most retarded shit imaginable so their budgets aren’t reduced. One of my units bought sunglasses for the entire battalion. Others buy equipment that they know damn well they will never EVER use. Suddenly everybody goes on TAD to posh locations.

So troops see all this idiotic waste, and yet are told that their pay is going to be cut and their BAH is going to be reduced. THAT is what causes morale to drop.