We should all sneer in the face of North Korean fearmongering

We should all sneer in the face of North Korean fearmongering 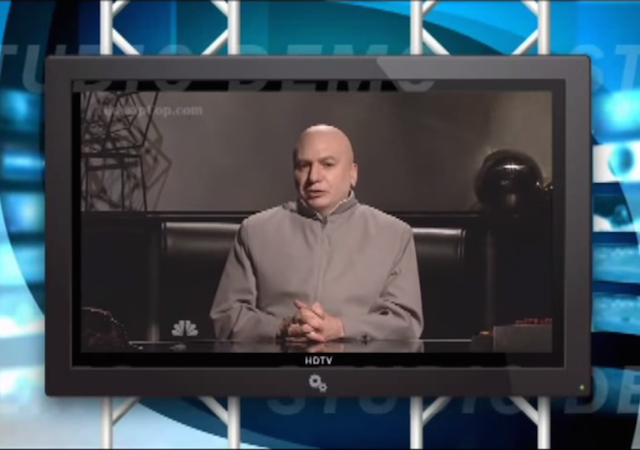 Remember the time when North Korea threw a cyberterror party—and EVERYBODY showed up with bottles of wine and things in hopes that they would stop?

Well, not everybody, but everybody actually involved bent the knee to the World’s Worst Country and brought shame upon the heads of freedom-lovers everywhere. Fortunately for the future of the Western world, the rest of us got together and took a stand against psychological cyberwarfare and for the principles of free speech, free expression, and the freedom to watch Seth Rogen bumble around on screen.

Oh, and the freedom to troll the hell out of North Korea.

The U.S. just took away North Korea's Internet like a couple of hipster parents.

How would they even know? ** North Korea experiencing widespread Internet outages. http://t.co/1B2yGiFojA pic.twitter.com/4nt2DU9ZGm

The North Koreans can’t even load a gif of the world’s smallest violin. http://t.co/oY8Zx1Lspv

Saturday Night Live even resurrected the popular “Dr. Evil” character to take a hit at the Hermit Kingdom:

As Jonah Goldberg notes, North Korea’s systemic torture of its people is nothing to take lightly. It deserves our attention and our action. That being said, there’s only so much the average civilian can do, which is why I believe that ripping on North Korea is something we should embrace.

North Korea has shown time and again that its ego is just as fragile as its infrastructure. When they hacked Sony and started making threats, they may not have worried the military, but they did worry a large group of people who subsequently caved to their demands, scuttled a popular movie, and then threw themselves under the bus for good measure.

By answering this manner of cyberterror (whether or not it’s actually “terrorism” or an “act of war” is still up for debate) with snark, humor, and other forms of easily-shareable media, we not only temper the effectiveness of the threat; we bring attention to the fact that North Korea is run by completely insane, sabre-rattling man-children who torture their own people. A lot of writing done about foreign policy is dense and inaccessible, but a meme can pique interest where a white paper may fall flat.

Humor is a gateway drug to an authentic conversation about what’s happening to the people of North Korea. Using a meme to raise awareness may be unorthodox, but if it gets more people to pay attention, I’ll share it all day long.

I totally want to take that Viking river cruise.

You got an Instapundit link. Congratulations

Remember that lighting map of the Judge’s only shows the lights that are on and visible from outside.

The thousands of hamster-wheel run generators stay in the basements, as do the disco balls.

they only have 1 block of addresses and limited routing. any script kiddie could take them out with a 2Gbps ddos.
I don’t think this was official US, anonymous and lizard were already threatening to do this to them.
the US shutting them down would prevent them from dealing with them through diplomat channels, cross purposes to their desires.
I’d say this was either private group/individual or the china telcom messing with them. my bet is on private.

If you follow some of the military channels, some vets have done the best job of spoofing him.

MBest11x really is the best.

Lil Kim is out of money for caviar, lobsters, and expensive booze? He usually throws an infantile fit whenever it’s time to restock the larder.

I still think it’s an inside job.

I think it was just a maintenance window to upgrade the national router from 10Bt to 100.