Venezuela On the Road to Default

Venezuela On the Road to Default 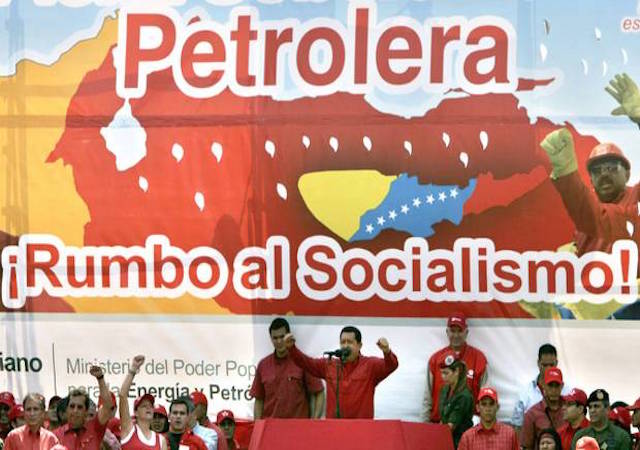 Over the summer I covered the Argentine government’s default on its debts owed to U.S. hedge funds—its second default in just 13 years.

Now fellow Latin American socialist paradise Venezuela is gearing up for a default of its own, as precipitously falling oil prices have decimated the country’s budget and will continue to pressure its currency reserves. Since mid-June, crude oil prices have declined by more than 30%, with West Texas Intermediate (the benchmark measure for North American oil) dipping to $60.55/barrel before ultimately settling at a 5-year low of $61.54/barrel on Wednesday.

A CNBC report on the prospect of a Venezuelan default cited a Capital Economics report stating that a default could be expected by next September or October when $5 billion in debt payments come due. Only an upswing of oil prices to somewhere around $121/barrel would allow Venezuela to balance its budget, according to some estimates. But with OPEC recently slashing its 2015 production levels to a 12-year low in response to decreasing estimated global oil demand and increasing supply via U.S. shale production, a significant oil price increase in the short-term seems highly unlikely. Bloomberg reports that the implied probability of default—derived from complex financial formulas—in the next five years stands at 93%, the highest in the world.

Meanwhile, low oil prices translate into low oil revenues for PDVSA, Venezuela’s state-owned oil and natural gas company, which means the Venezuelan government will have to dip into dwindling reserves to service debt payments. Ratings agency Moody’s estimates that the country’s non-gold reserves are less than $7 billion, with only half of that “freely available and usable.”

How is it that the country with the largest proven oil reserves—more than 297 billion barrels—sports an economy in such shambles? There are many reasons, but a few stand out:

1) There is an over-dependence on oil, which has lead to little investment and development in other sectors of the economy. According to CNBC, oil accounts for 95% of Venezuela’s exports, and combined with gas, accounts for 25% of its GDP. (In comparison, oil accounts for just 0.9% of the U.S.’s GDP.) Venezuela imports almost 80% of its consumption, and 20% of that comes from the U.S.

2) Venezuela gives away almost half of its oil. CNBC reports that about 1.2 million barrels of Venezuela’s average 2.6 million barrel-per-day production go to Cuba for free and to its own citizens at heavily-subsidized prices. According to Bloomberg’s Pain at the Pump chart, the average cost of a gallon of gas in Venezuela is $0.04.

3) The windfalls from the days of high oil prices were squandered. Hugo Chavez and his successor Nicolas Maduro, leaders of the United Socialist Party of Venezuela, siphoned PVDSA’s earnings into social programs and their own political campaigns. Recently, Maduro spoke of making budget cuts to high-level officials’ salaries and “luxury” spending, but went on to say, “[W]e will never cut one bolivar [the Venezuelan currency] of what we spend on education, food, housing… on our people.” Maduro has also vowed to increase oil’s prices back to $100/barrel, which is “where they should be.”

4)  The Venezuelan government mismanaged PVDSA so badly that in early November the country, for the first time in its 100-year oil-exporting history, had to import oil to meet domestic demand, according to a USA Today report. Because PVDSA does not have enough money to invest in the infrastructure necessary to process the extra-heavy crude oil it drills, it uses an inefficient method of blending the heavy oil with lighter crude (this process removes minerals to make it ready for refining). This lighter crude is what the country imported, despite its domestic abundance. Central planning and mismanagement of PVDSA’s funds were so poor, the company also did not invest enough to produce as much lighter crude as needed.

5) The government ran huge budget deficits when oil revenues weren’t enough to fund its welfare state. In 2012, despite record-high oil prices, Venezuela’s deficit ran at 17% of GDP. In other words, despite squandering the oil revenues—thereby depriving its oil company of making the necessary capital investments to ensure sustained production—the Venezuelan government still did not have enough money to fund its numerous social programs.

It is no surprise the current squeeze on oil prices has Venezuela entering crisis mode.

Is there any hope for Venezuela? As it stands, the government technically has enough cash to meets its obligations due next year. The government also received $1.75 billion from Goldman Sachs in exchange for rights to debt payments originally owed to the country by the Dominican Republic as part of the Petrocaribe oil financing program, and it can sell more of this debt, like that owed by Jamaica, according to CNBC. Furthermore, the government could sell its assets in Citgo, which is owned by PDVSA and valued at more than $10 billion (by the Venezuelan government).

Are we going to get to see what happens when a government runs out of other people’s money?

Are we going to get to see what happens when a government runs out of other people’s money? Who should we put in the front row seats?

Like Cuba, Venezuela serves as a(NOTHER) case history of what you get from the Collective if you once give them enough power.

Of course, now we have our own…

2) Venezuela gives away almost half of its oil. CNBC reports that about 1.2 million barrels of Venezuela’s average 2.6 million barrel-per-day production go to Cuba …

I would like to add something that is kind of tragic and ironic: not only did Venezuela gave away all this oil to Cuba (or to be more accurate, Chávez and Maduro “redistributed” the oil owned by Venezuelans to Cuba), but it also “sold” oil to other countries “in need” with special financial terms under the Petrocaribe initiative.

This scam worked this way: as long as oil prices were above a certain level (I believe over $50 per barrel), the beneficiary countries would pay that amount immediately and the rest would be financed at very generous terms. Again, if the price of a barrel is $75.00, just pay me $50.00 and pay me the $25.00 at almost zero interest over 25 years (BTW, the only country that payed the full price for Venezuelan oil was …the USA)

So beneficiary countries were basically getting free money, which if they were smart would free a lot of cash for other expenses. At least in the country I’m familiar with (the Dominican Republic) most of that windfall was stolen… but that’s another topic. In the D.R. the accumulated debt with Venezuela was about $4 billion…and here is were it got interesting.

Pressed for cash Venezuela sold that $4 billion debt to Goldman Sachs for $1.75 billion (.44 cents to the dollar) without even bothering to notify the Dominican Government (who likely would have been glad to pay that amount or even more to retire that debt).

The saddest thing about this whole deal? Venezuelans citizens are moving to the Dominican Republic to escape the economic crisis in their country (about 80,000 so far this year according to this report). In the 1970s Dominicans used to move to Venezuela looking for prosperity; now the flow is reversed.

Think about this: imagine you’re a Venezuelan, knowing how rich your country is and your government gave away your resources to a country that really didn’t need it (the Dominican Republic has vast reserves of gold and silver and it’s the largest tourist destination in the Caribbean)…and now you have to escape to that same country? This would be crazy if it wasn’t so sad.

We might as well prepare for yet another flood of Venezuelan men. They will be here. So, what to do with them?

I submit that they should have guest worker permits, as we have had in the past, and do not have now, due to Sen. Ted Kennedy’s intransigence. They should be allowed to come here to work, and go home and return, freely. This is not “amnesty.” This is correction of a stupid gap in our laws that has had perverse effects.

Let them work here, let them learn about how we do things, and let them grow intolerant of graft as a way of life. Let them send money home, and let them go home when they have met their financial goals. And when they go back, they will take our intolerance of stupid, inefficient government with them.

Let us export “Americans” to Venezuela.

“And when they go back, they will take our intolerance of stupid, inefficient government with them.”

Uh, Venezuela has been on the road to default since before Chavez took power. So tell me what part of this is news.

Oh wait a minute … I get it. It’s not really real until the checks start bouncing and the ATMs don’t work.

It’s sad for its citizens that Venezuelan politicians do not understand economics. Pres. Maduro thinks he can magically raise the price of oil to $100/barrel. As long as some other country is selling it for less than $100/bbl, then only a fool would buy his product.

An entirely true comment, but you coulda just stopped with your first sentence.

Chavez DID understand enough about economics to loot a vast fortune from his country, however. THAT they understand…

“It’s sad for its citizens…”

I know longer give a damn about most of worlds citizens*. They vote for, or allow without a fight, commie bastards to take over their country and loot it, all for the promise of a “free lunch”.

I’ve traveled all over this planet. I first went to Venezuela around 1990. My boss at the time asked what I thought. My reply was “it’s a slow motion disaster in the throes of destruction”. Before Chavez.

*that would include about half of ours, all they want is for someone else to pay for their stuff.