So professor discounted answers to the question after complaints. 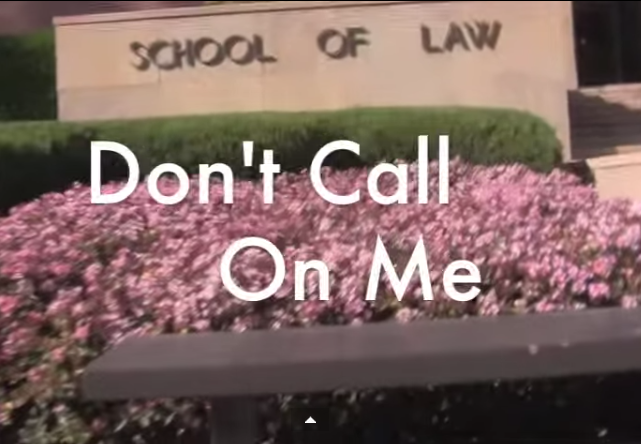 You thought it was bad that law students at Columbia, Harvard, Georgetown and Berkeley demanded exam delays because of the failure of grand juries to indict in the killings of Michael Brown and Eric Garner?

Harvey Silverglate, civil liberties lawyer and co-founder of the FIRE, tweets a link to a Volokh Conspiracy post:

Some students at the UCLA School of Law have expressed concerns after a professor asked an exam question this week relating to the fatal police shooting of Michael Brown, an unarmed black teenager, in Ferguson, Mo.

The exam, given by Professor Robert Goldstein in Constitutional Law II, asked students to write a memo related to the Ferguson shooting. Some students who took the exam said they found it difficult to write about the incident in terms of the first amendment while ignoring issues such as police brutality….

“These kinds of questions create a hostile learning environment for students of color, especially black students who are already disadvantaged by the institution,” Turk said.

Goldstein apologized for the question in an email.

“I recognize … that the recent disturbing and painful events and subsequent decisions in Ferguson and New York make this subject too raw to be an opportunity for many of you to demonstrate what you have learned in this class this year,” Goldstein said in the email.

Goldstein added that he will discount scores students receive on the question if it lowers the overall score of the student.

In an email statement, law school Dean Rachel Moran said the question was intended to have students examine the Clear and Present Danger Defense.

“In retrospect, however, he understands that the question was ill-timed for the examination and could have been problematic for students given the anguish among many in our community over the grand jury decisions in the Michael Brown and Eric Garner cases,” Moran said.

Eugene Volokh, also a UCLA law professor and whose post has the full exam question (see below), notes among other things:

… I think the original question was perfectly proper, and I don’t agree with the criticism of the question. The question doesn’t penalize people for having particular personal opinions on the subject. Like most law school exam questions, it just asks them to discuss how the precedents apply to the facts, in the process explaining the arguments on both sides….

The list could easily go on. Indeed, note that this question isn’t even about racial epithets, or racist speech used against blacks; apparently its mere connection to the Ferguson verdict was enough to lead to condemnation. If people accept the view that such questions are improper, it’s hard to see how that view would stop at this particular question.

You will not be surprised that I have little tolerance for the whining and hyper-sentitivies exhibits at numerous law schools.

Here’s the full exam question, in case you are interested:

CNN News reported: On Nov. 24, St. Louis County prosecuting attorney Robert McCulloch announced in a publicized press conference that Police Officer Darren Wilson (who has since resigned) would not be indicted in the August 9 shooting of Michael Brown. Michael Brown’s stepfather, Louis Head, was with hundreds of protesters assembled outside the police station, listening on loudspeakers and car radios when they learned Officer Wilson was not being charged. Standing on the hood of a car, Mr. Head embraced Michael Brown’s mother. Mr. Head asked someone for a bullhorn but it was not passed to him. He turned to the crowd, stomped on the hood and shouted, repeatedly, “Burn this bitch down!”

Police Chief Tom Jackson told Fox “News,” “We are pursuing those comments … We can’t let Ferguson and the community die [as a result of the riots and fires following McCulloch’s announcement]. Everyone who is responsible for taking away people’s property, their livelihoods, their jobs, their businesses — every single one of them needs to be prosecuted to the fullest extent of the law.”

County Attorney Robert McCulloch asks lawyers in his office whether to seek an indictment against Head by relying on a statute forbidding breach of the peace and another prohibiting rioting (six or more persons assembling to violate laws with violence). A recent hire in the office, you are asked to write a memo discussing the relevant 1st Amendment issues in such a prosecution. Write the memo.

I understand a law student not being able to handle the question intellectually.

It’s not an easy exam question, particularly if you haven’t listened during class or studied for the final exam.

But please leave the excuses at home.

fail the bastards Because clearly a profession in law is not suited to them.

I’m put in mind of the “fainting goats”.

I love these stories!

(But wouldn’t “fainting goats” be a bitchin’ name for a geezer band?)

I saw The Fainting Goats open for Cheap Trick in Bayonne back in 1978.

What the heck are we doing to our children?!!!

In short: they never grew up. Me? In some cases I feel not scorn, but pity.

Assuming Mr. Turk manages to graduate and pass the bar, what is he going to do the first time he’s asked to write a memo about something that has been in the news and something that upsets him oh so terribly?

And is asked to do so because it’s now PART OF HIS JOB DESCRIPTION AS A LAWYER?

The whole point of becoming a professional is learning how to think and perform under pressure. It’s about being able to set aside one’s personal thoughts and issues and doing one’s job.

Mr. Turk might be asked to do something really upsetting — defending a murder suspect, or a rapist, or (gasp!) a Republican. How’s he going to do that if he gets the vapors?

These students have a prestigious career ahead of them, 9th Circuit Court at least.

Everybody is an example, some positive, some negative. The 9th Circuit is one of the latter, and I believe would be a perfect place for these delicate snowflakes.

and the professor is willing to apologize and edit test scores to please people.
I’d say he is a bigot, he thinks he needs to grant favors to some people or else they are not smart enough to pass.

Our society has become pajama boy.

…As a non-lawyer, it sounds like the problem is not with the legal issues, but with the mere possibility that Mr. Head could, let alone should or must, be prosecuted for inciting a riot. It sounds like the further problem is that “the law” supports a prosecution, but politics and the emotions of the students do not permit nor tolerate it. Indeed the mere possibility of insisting Mr. Head be accountable to the law for violating the law must strike them as appallingly insensitive and wrong.

So because the question implicitly puts a black student on the wrong side of his or her racial politics, it is offensive, however in line with the law it may be.

“…the question was more emotionally difficult for black students to answer than for other students.”

Oh, puleeze! Wait until they actually go to work for an established law firm and find out what it takes to get it done. Will they be traumatized by the work load or the cases they are assigned to?

What a bunch of candy azzes.

If they are indeed hired by an established law firm, it will be to Add Color to the list of associates. They will handle softball cases, look good on the company website (“hey! we have colored folks on our roster, too!”), and one MAY make Partner, again to Add Color where needed for the sake of appearances.

Oh, these pansy-asses are gonna love life. If this is all it takes to knock them loose from their tiaras, imagine what parenting teens, paying taxes, kidney stones, or that first colonoscopy is gonna do to them.

“Hussain Turk, a second-year law student who took the exam, said he thinks the question was problematic because he thinks exams should not ask students to address controversial events.”

Has Mr. Hussain Turk ever taken a Freshman English class? All those classes do is talk about controversial topics and grade students on how well they write about them.

I think the reason for the melting snowflakes needing smelling salts is that the question actually suggests that Louis Head might possibly have some responsibility for the fires set in Ferguson. Had the exam question been, instead, how best to proceed with “civil rights” violations against Officer Wilson, I assume the snowflakes would have frozen right up in mid-melt and written scathing screeds.

If the good Mr Turk cannot handle controversy, I suggest he switch majors. Law is not for him.

“… especially black students who are already disadvantaged by the institution…”

I’m wondering how exactly the institution is disadvantaging black students, but here’s a guess: The law school admits many of them on an “affirmative action” or “diversity” basis, and because they are less academically prepared than white or Asian students, the work is more challenging to them and they are disadvantaged.

Any chance that’s what he means?

The horror! Asking law students to act as lawyers!

I have to disagree with Mr. Jacobson. It is not a difficult question, especially for a law student. I could probably come up with an acceptable “memo” with minimal instruction on composing such a memo.

I’ve never been to law school, but even I could set aside personal biases and comment on the 1st Amendment relevance of Head’s impulsive incitement.

Any law student too traumatized and incapable of simply commenting or writing a memo about the incident needs to change majors.

When I took the state test for certification as a teacher, one of the requirements was to be able to write a persuasive essay. They provide the topic. If you’ve been paying attention, you write a 4 or 5 paragraph essay, and each paragraph has 4 or 5 sentences. Because that’s what they expect you to be able to teach the kids to do no matter what subject you teach. They don’t really care what stand you take on the question. The morning I took the test the question was, “Do you think a state should use a lottery to raise funds to pay for education?” After the test was over, there were people who complained the question was too controversial, and they were worried taking the wrong side of the issue would hurt their job prospects. These people are teaching future law students.

A lawyer is supposed to be able to evaluate a case and advise a client. That means understanding the strengths and weaknesses of each side of a given issue in a given fact pattern. A lawyer cannot competently represent a client in court without anticipating the best arguments of the other side.

I have seen the result when a lawyer walks into a courtroom thinking that he is going to “demolish” a witness, without ever having considered that the witness might have a point. It isn’t pretty.