One at a time 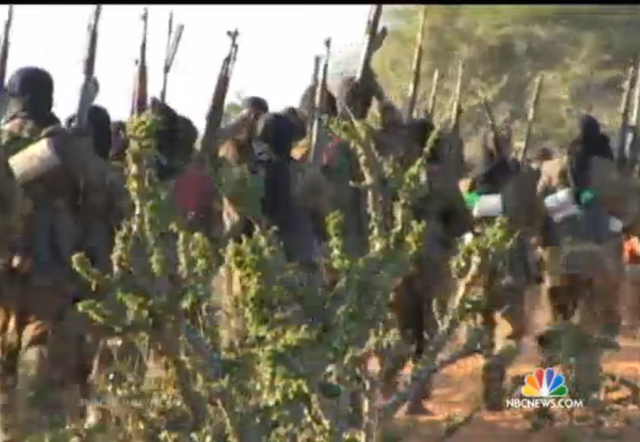 “The target of the strike was a senior al-Shabab leader,” Kirby said in a statement. “At this time, we do not assess there to be any civilian or bystander casualties.”

A U.S. defense official, speaking on the condition of anonymity to discuss the ongoing analysis of the strike, said officials were not fully certain whether the strike had hit the militant. But he added: “We think the targeting was done precisely and accurately.”

The official said that Monday’s attack on al-Shabab did not include any U.S. operations on the ground against the militant leader, whom he declined to name.

Multiple news outlets are reporting that the target was a “senior leader” of the al-Qaida affiliate, but American officials have not yet confirmed a name, or if the strike was successful.

This is familiar territory for the U.S. Military, whose targeted drone strikes in southern Somalia this past September deposed former al-Shabaab front man and spiritual leader Ahmed Abdi Godane. After those strikes, Abu Ubeid Ahmed Omar rose to power within the organization, and although officials’ lips are sealed (for now) about who this latest target was, it would make sense for the U.S. to target Omar.

Godane was instrumental in transforming al-Shabaab from a fractured, regional threat into a well-oiled machine; he solidified ties with al-Qaeda, and helped the organization reach beyond Somalia’s borders. After Godane was killed, others within al-Shabaab threatened retaliation, and followed through.

Omar had big shoes to fill, and taking him out would give opposition forces a chance to exploit a fractured al-Shabaab as they scramble to appoint a new leader. Somalia itself failed as a state because of the fractured and contentious nature of its remnant clan system, and its people are prone to this type of conflict. If al-Shabaab starts showing its cracks, it will have nothing to fall back on because at this point, what’s left of the population is going to support whoever they believe will give them the best chance at escaping death by disease and starvation.

This type of incremental deconstruction may not be wholly satisfying within the context of the humanitarian crisis currently gripping the Horn of Africa, but it’s the best way to set al-Shabaab on a slow roll toward self-destruction.

Good. Keep at it.

Although I was surprised that Omar was in Somalia. I thought he had been shot in the back of the head while buying a pack of cigarettes in a convenience store in Season 5, Episode 8 of The Wire.

Targets them for what, free honorary degrees from Oberlin College ?