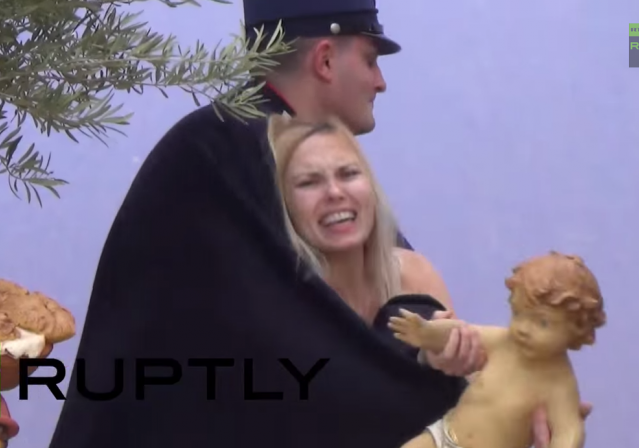 Sextremist (evidently, this is a thing), Iana Zhdanova kidnapped baby Jesus from the nativity scene in St. Peter’s Square in Vatican City Thursday. Zhdanova had “God is a woman” scribbled on her naked torso as she accosted the infant and attempted to flee. Vatican police intervened, returned baby Jesus to His manger, and then covered and arrested Zhdanova.

Zhdanova is a FEMEN activist. According to FEMEN’s website, the sextremist act was premeditated and part of a larger plan to “hunt for Bethlehem babies”:

FEMEN sextremist kidnapped a newborn baby in Vatican. FEMEN opens a hunt for the Bethlehem babies under anticlerical campaign “Massacre of the Innocents”. The campaign is dedicated to the criticism of the senturies-old Vatican stance on women’s rights for own body and reproductive function. The maniacal desire to control women’s fertility is a common trait of many religions, National Socialism, nationalism and other antediluvian, anti-humanist ideologies.

FEMEN touts Zhdanova’s arrest as one that will lead to an “historic trial” where she will be judged for hurting the feelings of religious people. They went on to say it’s the “sacred duty of every woman…to take away the child from Vatican!”

Somewhere along the way, I missed this sacred duty memo.

After spending the night in jail, Zhdanova was released and subsequently kicked out of Vatican City.

Vatican reply: “No shirt, no service.”

JackRussellTerrierist in reply to legacyrepublican. | December 29, 2014 at 1:21 am

“Get thee to a nunnery.”

legacyrepublican in reply to JackRussellTerrierist. | December 29, 2014 at 9:26 am

“By my troth, the fool has an excellent breast!”

JackRussellTerrierist in reply to legacyrepublican. | December 29, 2014 at 4:11 pm

“Look before you leap”

Sorry… I just have to say it…

What A Stupid Broad.

“hunt for Bethlehem babies”
“Massacre of the Innocents.”
Sounds like they are now part of ISIS.

I bet she is all for diversity, in spite of her actions against it. Then she may have had to take time off from work to do this, so she made less than her male counterparts, and that cop manhandled her which is rape (she didn’t consent to it, the touching was unwanted). She was probably thinking too much about Ferguson, and also upset about the shirt the space guy wore on his big day.

The woman is an idiot. Why are we talking about it? To encourage more idiots to humiliate themselves as well?

……Because nothing says “meaningful support for female dignity” like wandering around with slogans scrawled all over your chest while stealing holiday decorations.

I thought as much. Abortion is ritual sacrifice (i.e. “planned parenthood”) of a wholly innocent human life when it is uniquely vulnerable. Not unlike abducting a “baby jesus” statue that is left unattended, but accompanied with lethal injection, decapitation, and dismemberment.

Sorry, FEMENists, your choice ends when a human life is conceived. It self-evident that a human life evolves from conception to natural, accidental, or premeditated (e.g. abortion) death.

And cover your boobs. Anthropogenic overexposure is a leading cause of asset depreciation.

Ironically, FEMENists’ language is inordinately orthodox. Rather than “the choice”, it should be: the calculus changes when a human life is conceived.

A witch named Ginette Paris wrote a book called “The Sacrament of Abortion,” which was actually handed out as a parting gift at several Canadian abortion “clinics.”

I guess it’s somehow comforting to know that you weren’t terminating “a lump of cells,” but were making a blood sacrifice to the moon goddess. Yeah, that should help your mental recovery.

Her face has the expressions of a cult-following lunatic who has been completely brainwashed. She looks beyond over-wrought.

But, she went to the right place.

Hmmmm…..I wonder if there’s something happening here we don’t fully understand. They scream about this supposed right, yet there she is naked, as though she gave birth, breasts uncovered, as though to nourish, and screaming as baby Jesus is wrenched from her arms. It seems like a mixed message. Do these women subconsciously KNOW the guilt of their advocacy for abortion so they subconsciously actually seek to save the babies? Is the title, “Massacre of the Innocents” a slip-up of sorts, a hidden atonement?

The takeaways from this story:

3) Motorist “plowed people down” (I wouldn’t exactly call this “plowing through” the line of people).

All that matters is that these morons get to be “grieved” in a public forum.

There’s a market for these in Southern Cal, huh?

“A***tion is sacred!” It is the incarnation of evil to say “good is evil, evil is good”. This inversion is common among disciples of the Evil One. The history of child sacrifice to Moloch is described by Wikipedia:

As a god worshipped by the Phoenicians and Canaanites, Moloch had associations with a particular kind of propitiatory child sacrifice by parents. Moloch figures in the Book of Deuteronomy and in the Book of Leviticus as a form of idoloatry (Leviticus 18:21: “And thou shalt not let any of thy seed pass through the fire to Moloch”). In the Old Testament, Gehenna was a valley by Jerusalem, where apostate Israelites and followers of various Baalim and Caananite gods, including Moloch, sacrificed their children by fire (2 Chr. 28:3, 33:6; Jer. 7:31, 19:2–6).

Her fanatical ideology turns men away, so she runs around bare chested with an “I am a gullible fool” message on her chest, trying to draw men to “bed the dummy”.

FEMEN was created by a man, members carefully celected to appeal to — ho-hum — the male gaze. They are a multiple-purpose protest group, protesting everything from poor roads in Ukraine (a good cause if there ever was one) to Ukrainian Vatholics objecting to abortion. One of them peed in public to protest lack of public toilets downtown Kiev — you get the idea.
…Interestingly, they went on record opposing The Islamic treatment of women.