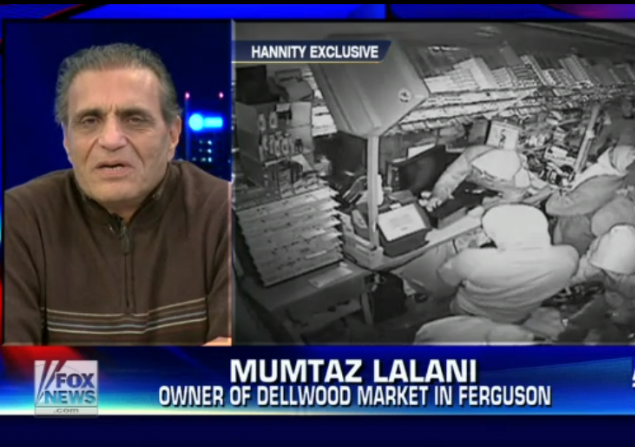 The Dellwood Market, near Ferguson, has been looted three times, on August 10 and 17, and again after the non-indictment announcement in November.

The owner was on Hannity tonight, and said he’s probably going to call it quits after 25 years.

He just can’t take it anymore. 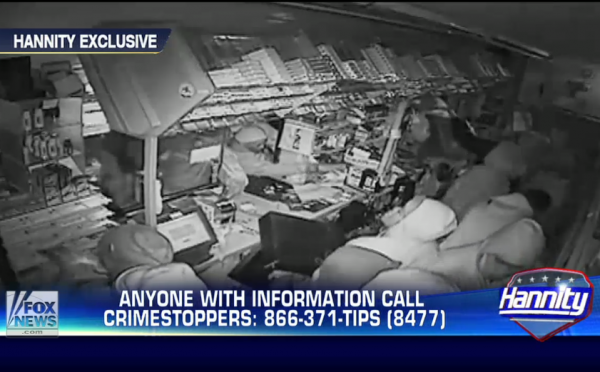 The Hannity segment video below:

slow learner… but i hope he does.

i hope they all do. pull out, and leave an empty lot or a boarded up shell.

the visual of everyone having an EBT card and nowhere to use it will keep me smiling for days.

It won’t do much good. Section 8 housing for willful barbarians is coming to your community, mandatory per Federal Judges’ decrees.

I am sure Al Sharpton will say that he is racist for not rebuilding so it can be torn down again.

“To protect and serve…”

That’s what should be on the side of every police car, since the Supremes have essentially said that the police have no affirmative duty to do the first part of that bogus slogan.

They do a remarkable job, the police generally, and it’s one nobody could pay me enough to do.

Besides the people directly involved in the looting, there are really some others who should be dragged out and brought before the people, starting with Gov. Nixon.

On his head be this. He had the tools to prevent this, and he showed himself a coward.

“and it’s one nobody could pay me enough to do.”

Amen to that, I looked into how much a county deputy makes here and its starting at like 32500. That is so not enough for the potential of getting shot at, stabbed, spit on, and so on and so on.

As far as Gov. Nixon he already has a D behind his name isn’t the coward implied at that point?

Bob McCulloch has a D, too. But, put in the position he was, he comes out as a really stand-up man in my book.

I don’t let McCulloch off the hook so easily.

He could have pursued perjury charges on the most egregious offenders but chose not to. Even if they are plead down, it sends a message that outright fabrication will not be tolerated #checkyourcognitivedissonance.

The way I see it, the people who told the truth are villified in their community while the people who lied are patted on the back and allowed to maintain this epidemic thought sickness.

“He could have pursued perjury charges on the most egregious offenders but chose not to.”

My thoughts exactly, as I was listening to the “non-indictment” announcement. When he said that sworn statements were shown by evidence to be false, and several “witnesses” retracted their testimony and admitted they had not, in fact, witnessed the incident, my first thought was, “So, you’re going to be pressing charges for making false statements, against each and every one of them, right?”

It’s not like he doesn’t have the “sworn testimony”, the retractions, and their names and addresses at his fingertips.

Dorian Johnson, although far from an upright citizen himself, was probably coerced/intimidated by Brown into being his accomplice, or accessory after the fact, in the robbery, and into disobeying the police command to stop jaywalking. I think he was probably intimidated by the unruly mob around him into making false statements. That was the cause of all the riots.

You mean they haven’t been prosecuted YET. Instant gratification doesn’t work in the law.

Just FYI, I see perjury very commonly. I’ve never seen it punished. I hate that, but that IS reality.

You have seen perjury punished: Shellie Zimmerman, the wife of George Zimmerman pleaded guilty to misdemeanor perjury and was sentenced to a year of probation and 100 hours of community service.

The charge was based on a statement she made at her husband’s bail hearing. She said they had limited funds, despite receiving $135,000 in online donations for George Zimmerman’s legal expenses. A Washington Post article details how Shellie transferred and used money from that fund for purposes other than George’s legal defense:
http://www.washingtonpost.com/national/shellie-zimmerman-pleads-guilty-to-perjury-discusses-husband-george-zimmerman/2013/08/29/6395b46c-10b9-11e3-bdf6-e4fc677d94a1_story.html

Perjury charges are rarely made in Florida. However, Special Prosecutor Angela Corey, who was prosecuting George Zimmerman for murder, has an aggressive and successful record for winning perjury cases:
http://articles.orlandosentinel.com/2013-02-18/news/os-shellie-zimmerman-perjury-stats-20130218_1_shellie-zimmerman-perjury-case-perjury-charge
“From 2009, when she took office, through June 30, she successfully prosecuted nearly three dozen perjury suspects in Duval County.
“Most were guilty of lying while filling out workers’ compensation forms, making insurance claims or filing police reports. A far smaller number — 10 — were witnesses who lied in court, records from her office show.”

Whether Corey’s pursuit of Shellie Zimmerman on perjury charges was a tactic designed to put pressure on George Zimmerman (to accept a plea bargain, IIRC) was debated at the time.

And perjury is not committed only by witnesses. I once experienced a federal juror perjuring himself during voir dire conducted by the federal judge. This juror became the foreman of the jury and rammed a verdict down in a couple of hours. Once the perjury became clear the federal judge, who had been lied to by the juror under oath, indicated that he was too busy to be concerned about it.

He is white, after all, so he has reaped a lifetime of undeserved success and easy pickings. What more needs to be said by obama and Holder?

6 years of Obama and Eric Holder. Can race relations get any worse in the next two?

Yes, they can and will. obama has more flexibility now.

Yep. I always worried most about Obama’s second term, but I thought there was a chance he’d keep the mask on for the sake of the Democrat Party. It looks like he’s decided to go full “Bulworth”. Probably in part because his ego is bruised after no Democrats wanted to be seen near him or campaign on his record, including Obamacare. It must infuriate him that Schumer and Harkin are saying Obamacare was a mistake.

It’s gong to get very ugly with radicals like Al Sharpton and Valerie Jarret advising him.

Don’t you just hate seeing a legally purchased & licensed firearm being used in that way? /sarc

I wonder how the home values are holding up in Ferguson, MO?

If we are to be truly democratic about this, we have to ask what the community in Ferguson believes it requires to address its needs for progress. This experience shows that the community believes that the things it needs to pull it out of poverty and oppression are smokes, drinks, snacks and sporting goods.

You forgot the nails and weave from the beauty store they looted again.

I think that’s an interesting story. That and the TEA party people who are UNreportedly helping out people in Ferguson.

Maybe Obama will offer these looters amnesty and they’ll come out of the shadows, get jobs, pay taxes, and really, really boost our economy…

Stupid conservatives. How do you know all that looted property didn’t go to charities? Hmmm?

Lotsa lil’ drunk kids, smoking cigarettes after having safe sex with all those condoms…

Do I blame him? Not for leaving. Definitely for sticking around this long. You can’t run an honest business when you’re surrounded by barbarians.