The War in Afghanistan is Over?

The War in Afghanistan is Over?

…but the troops are staying put 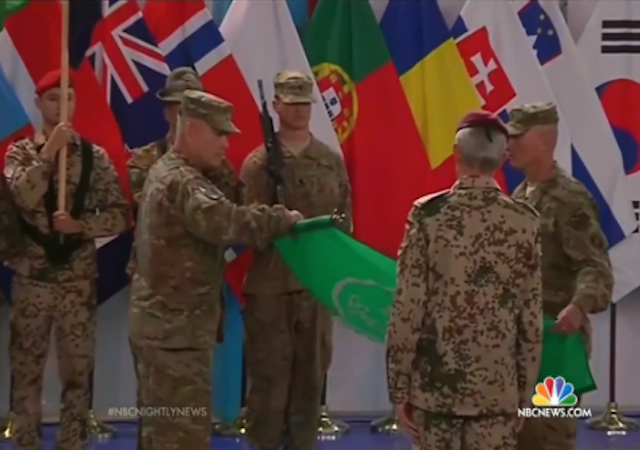 Yesterday, the International Security Assistance Force was folded away into history as the combat mission in Afghanistan officially came to an end. After more than 13 years, the day-to-day combat operations have now been handed over to Afghan security forces.

The new international mission, dubbed “Resolute Support,” will provide training and support for Afghanistan’s military, and require the continued service of 11,000 American troops; considering the total force caps off at 13,500, the American contribution will not be insignificant. In addition to providing more training, American forces are also authorized to assist in counterterrorism operations, which means that we’ll be providing air and ground support to Afghan troops for at least the next two years.

President Obama took a break from his vacation to send along a congratulatory statement to the coalition forces in Afghanistan, saying that, “[w]e are safer, and our nation is more secure, because of their service.”

But many in Afghanistan worry about what the change in mission will do to the already tenuous control Afghan troops hold over the country’s security:

Afghans have mixed feelings about the drawdown of foreign troops. With the deteriorating security situation, many believe the troops are needed to back up the Afghan effort to bring peace after more than three decades of continual war.

“At least in the past 13 years we have seen improvements in our way of life — freedom of speech, democracy, the people generally better off financially,” said 42-year-old shop keeper Gul Mohammad.

But the soldiers are still needed “at least until our own forces are strong enough, while our economy strengthens, while our leaders try to form a government,” he said.

NATO Secretary General Jens Stoltenberg has said that Afghanistan’s 350,000-member security forces are ready to take on the insurgency alone, despite complaints by officials that they lack the necessary assets, such as air support, medical evacuation systems and intelligence.

On Sunday, he said that ISAF’s mandate was “carried out at great cost but with great success.”

The Taliban waged a bloody internal power struggle this year, but still managed to make it one of the deadliest for both Afghan and American security forces. Attacks amped up following a coalition troop surge aimed at rooting out insurgents holed up in strategic locations, and Taliban leadership has vowed to increase casualties until they are able to establish an Islamic State.

According to Politifact, President Obama first promised back in 2012 to end the war in Afghanistan by the end of this year.

Operation Enduring Freedom may have a new name, but at the end of the day, American lives will still be in jeopardy as they organize forces against an increasingly hostile and radical insurgency.

Welcome to Operation Freedom’s Sentinel, America. If it feels familiar, it’s because it is.

“[w]e are safer, and our nation is more secure, because of their service.”

This is the closest to thanks former President Bush will get……

I wonder what ISIS will rename the country. Muhammadville? Burkaberg?

“NATO Secretary General Jens Stoltenberg has said that Afghanistan’s 350,000-member security forces are ready to take on the insurgency alone, despite complaints by [Afghani] officials that they lack the necessary assets, such as air support, medical evacuation systems and intelligence.” (emphasis added for clarity)

NATO says it, I believe it, that settles it. We’ll listen when a NATO official (who’s not on the ground in Afghanistan) says they’re ready, while Afghani officials (who are on the ground) say they’re still missing crucial logistical components.

But they’re ready … because Know-It-All NATO says so.

Obama has surrendered to the Taliban.

The troops are to remain there to try to keep the current regime in power at least until after the US November 2016 elections. After which, they don’t care.

There is no chance whatsoever that the current regime would survive without American troops present.

Remember Saigon in 1975? Its just a matter of time now for something similar in Afghanistan.

Don’t think so? Look at what’s going on in Iraq.