The sexually abusing Senate staffer you never heard of (because Democrat)

The sexually abusing Senate staffer you never heard of (because Democrat)

Good thing he didn’t make a rude comment about the President’s kids, or he’d be on front page everywhere. 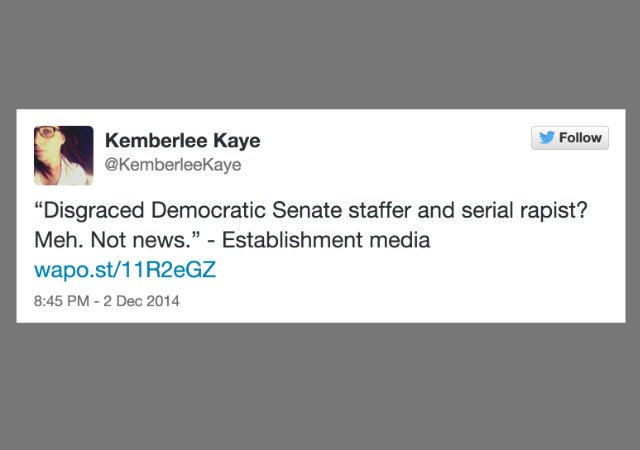 Ah what magic that little ‘D’ affiliation possesses. There was no story on Good Morning America, no major network news coverage of a serial rapist who will not be serving jail time, just a short form piece in the Washington Post. That’s it.

Mind you, the Washington Post and other media scalped Elizabeth Lauten, the Republican Congressional aide who was mildly critical of the Obama daughter’s scant wardrobe choice on her personal Facebook page.

Likely at the behest of the White House, WaPo assigned foreign policy reporters to cover Lauten. They began digging into her college papers, sealed juvenile record, and staking out her parent’s home. Lauten quit and is currently in self-imposed exile.

Credible sources indicate the White House was actively pitching the story of Lauten’s unforgivable indiscretions to their favorite media outlets.

Amazingly, the obscure Tennessee Congressman who employed Lauten was left completely out of the fray. Forgoing the “guilty by association” schtick, it was Lauten with the glowing red dot on her back. Make an example of Lauten and no one will dare throw shade at the Obama’s again, seems to be the message in all of this. Nothing else explains the disproportionate use of force.

Watching the inequity in media coverage got me all riled up (as we say in Texas). So I took to Twitter.

Twitchy was kind enough to capture the tweets.

We are not on an equal media playing ground. Everyone knows this. It’s part of why no one trusts the media at large and why network news channels, newspapers, and periodicals are struggling to stay afloat. They’ve lost the trust of their readership.

Today, Chris Cillizza at the WaPo wrote an article  exploring why the Elizabeth Lauten story exploded. His conclusion? Among other painfully irrelevant postulations, a slow news cycle.

It’s not like a Democratic serial rapist indicted on ten counts but getting off with probation is newsworthy. What about a Democratic bundler and gay rights activist who raked in over a half a million bucks for Obama’s re-election campaign getting arrested for raping children? Nah, also not newsworthy.

We’ve been shoved into a corner where we’re forced to divert resources away from watching the government in order to monitor the sad remnants of the fourth estate. And the paper that brought down Richard Nixon now makes a living destroying the lives of nameless staffers who suggest the First Daughters class it up a bit. Sad remnants, indeed.

It’s amazing that these people even pretend to be ‘news outlets’ anymore.

Who is being fooled?

Of course, this is the country that freely elected Obama twice, so it’s not like we’re a nation of thoughtful, well-educated skeptics, is it?

I am going to take exception to the words “freely”, “thoughtful”, and “well-educated” and the reason I am taking exception is because the media failed to provide the balanced coverage necessary for the electorate to become well-educated or to think fully about the impartial information necessary to make a choice free of misleading coverage, exclusionary non-coverage and downright lies.

While there was a failure of the voters, there was a major failure of our classically trained professional journalists with the highest ethicals standards to provide the information the electorate deserved.

I take some exception to your position here. The necessary information was available to anyone who wanted it, whether or not the MSM was involved in its delivery. In my not-so-humble opinion, it was lassitude on the part of a majority of the voting public that caused the election of this jackleg Chicago politico.

Of course, the Socialist Wing of the Left leaning Dhimmis will support everything done in his name.

We now know more about an obscure congressman’s obscure staffer than we knew…or indeed know…about Barracula.

This phenomenon has been noticed before:

The readers of the press can be divided into three groups…

Numerically, the first group is by far the largest. It consists of the great mass of the people and consequently represents the simplest-minded part of the nation. It cannot be listed in terms of professions, but at most in general degrees of intelligence. To it belong all those who have neither been born nor trained to think independently, and who partly from incapacity and partly from incompetence believe everything that is set before them in black and white. To them also belongs the type of lazybones who could perfectly well think, but from sheer mental laziness seizes gratefully on everything that someone else has thought, with the modest assumption that the someone else has exerted himself considerably. Now, with all these types, who constitute the great masses, the influence of the press will be enormous, They are not able or willing themselves to examine what is set before them, and as a result their whole attitude toward all the problems of the day canbe reduced almost exclusively to the outside influence of others…

If we had real men and women instead of corrupt, abject fools leading the GOP, the party would never kowtow to any nonsense by the corrupt democRat media. Instead of enabling it in this instance, they should have pushed back hard against it, and helped destroy its efficacy.

The idiocy of electing Boehner Squeaker of the House was bad enough once. But the idiocy of electing him a second – and a third time! — was surreal. And GOP Chairman Pee Wee Prebus — what the hell has that talentless hack done but help stab conservatives in the and get paid for it by our donations?

The nonsense of tolerating the electing and reelecting of party leaders based on their time just ‘hanging around’ has to end, and end immediately. And if the GOP hacks hogging high office won’t do it, we need to end their careers.

Donny Ray Williams, Jr should move to Arkansas and run for Governor as a Democrat and then maybe for President of the United States.