The ethical conundrum of the Sony hack story

The ethical conundrum of the Sony hack story

…and the matter of “stolen data” 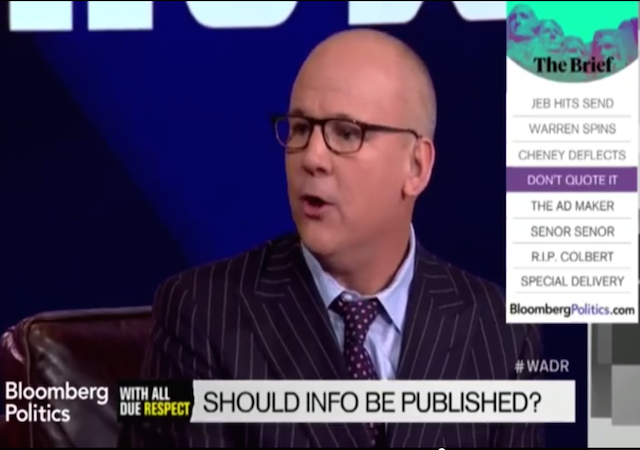 The media has created its own uproar over the Sony Hack. Business Insider has called it an “act of war,” and now Sony is trotting out its lawyers and demanding that media agencies refrain from reporting the contents of the stolen data, and delete anything they may have acquired as a result of the hack.

Of course, outlets have turned Sony’s demand into its own story, and debate over the ethics (and legality) of reporting on stolen data has gotten heated even as the initial furor over “racist” and “shocking” e-mail conversations has tapered off.

On Bloomberg’s With All Due Respect, host John Heilemann defended the newsworthyness of the hacked e-mails, taking on Aaron’s Sorkin’s position that it is “morally treasonous” for other media organizations to profit off of Sony’s misery.

Sorkin dismissed the idea that any content found in the leaked emails was “newsworthy” and said it was “morally treasonous” for news organizations to aid the hackers by printing their content.

But Heilemann was not so sure. “There are a lot of things that have been reported that would have been considered news if they had been found in another way,” he said, citing the racially-charged conversation between Sony co-chair Amy Pascal and producer Scott Rudin about President Barack Obama as an example. Echoing Al Sharpton, Heilemann compared those “racist emails” to those made by former L.A. Clippers owner Donald Sterling and said no reporter would have ignored them if they had been leaked by internal employees at the studio.

Heilemann’s co-host Mark Halperin reluctantly sided with Sorkin, saying the source of the information has to be taken into account before it is reported. “As I’ve always said, Aaron Sorkin: voice of reason,” Halperin added sarcastically.

I’ll leave it to the comments: is this stuff newsworthy? Or should there exist honor amongst those attention thieves who run highly competitive entertainment companies?

“I’ll leave it to the comments: is this stuff newsworthy? Or should there exist honor amongst those attention thieves who run highly competitive entertainment companies?”

Not worthy of Legal Insurrection, Amy. WAY too much hyperbole, and too little logic.

First, OF COURSE it is newsworthy. That is NOT in question.

Second, if it’s wrong, it makes no difference who has been done wrong. “…attention thieves”…???

And here, it is wrong…a major act of organized crime…to rip open the private data of any enterprise.

This is intellectual property, much of it. Would you have any question if the data were unique research and invention that gave a company a clear competitive advantage?

The fact it was stolen is newsworthy. But actually reviewing films based on their leaked versions – which I have seen already – is essentially making the following argument: someone stole it from you, so you don’t own the property anymore. That’s not a winning argument, morally or legally.

The private emails are an issue… But does anyone think these same folks would be circumspect about publishing or publicizing the juicy emails of any politician or figure-of-interest?

Sarah Palin’s emails were widely published on the net after her account was hacked.

Does anybody think they’d would hold back on some damning emails of George Zimmerman’s, regardless of how they were acquired? How about Darren Wilson? These Hollywood/media types live for digging dirt on people, and raking the muck.

Maybe I’m just a bad person, but my sympathy meter really isn’t moving that much.

There is no such thing as a private email.

I thought the precedent was set when moralists in hollywood and elsewhere fanned the flames of condemnation when private conversations of LA Clipper’s owner Donald Sterling were publicized. My view was that each of the indignant critics were effectively consenting to all of their private communications being fair game for PC scrutiny.

Come on Sony. I thought you guys were smarter than this.

Attempting to censor or remove something that is on the internet is known as the Streisand Effect. So named because Barbara Streisand made a huge deal about a photo of her house being on the internet and basically demanded it be removed and started suing people.

Naturally, this only caused people to want to know what the fuss was about and find the image.

Once something is on the internet IT IS THERE FOREVER.

Sony needs to accept that and get out in front of this thing.

These are VERY different circumstances.

This was a pure theft, not the release of very embarrassing information by one party to the exchange, as with Sterling.

There is a rule in intellectual property that REQUIRES that you defend it aggressively or you just lose it. Sony HAS to censor dissemination of this information. PLUS, if you republish a defamatory statement, YOU are liable, too. If you republish stolen information, that could stand as a principle of law against you, as well.

Are YOU as good as people who publish stolen data, or are you BETTER?

Theft is theft. All these concern trolls (You too IIRC) were silent when the same thing was done to Sarah Palin.

Now that it’s happened to SONY and a bunch of Hollywood elites I’m supposed to ignore the data and not read its contents? Hypocrisy much?

I’m waiting for all the “concerned people” out there to explain to me the difference between what happened to Sarah Palin, what happened to SONY, why they were silent on the former matter and not the latter, and why I should treat them differently.

I can’t wait to read that explanation.

How’s this: you’re full of shit.

Some day on some case I would love to see the Supreme Court issue a finding worded exactly like that. Sometimes short, simple and direct language can express complex concepts most eloquently.

Look, I think restraint is in order when any private communications are blabbed about. When we ponder the plight of media giants who have littered the planet with intellectual property that is easily copied and shared, I understand but giggle at the attempt to assert copyright infringement on leaks that embarrass them. These media people profit from moral confusion and voyeurism, so when they issue an ethics lecture this late in the gotcha journalism game, I see it as sauce for the goose. Morrissey explains it all at http://hotair.com/archives/2014/12/16/sorkin-morally-treasonous-media-dishonorable-for-reporting-off-of-hacked-sony-documents/

Amazing to me that a company so renowned for its engineering prowess could be hacked so badly so many times…remember the debacles of their online gaming network a few years ago?

When the ClimateGate emails were leaked, what they showed was often dismissed by warmists because of the source. “Those emails were stolen!” They said indignantly. But what was revealed was important to the debate – it showed arrogance, fraudulent science and collusion. It mattered, regardless of the method it was revealed.

Wikileaks led a lot of people to arrive at the same conclusion. If you go back far enough, the Pentagon papers case was also similar.

The Sony stuff hardly seems to reach the same level of significance but it should be the same argument: The source is not relevant to the meaning or value of the content. The debate about the content is separate from the way it came to light.

OTOH, if the hackers can be found they should still be prosecuted.

1. governments, IMNHO, are fair game unless national security (really) is at stake, and

2. fraudsters like the Climategate conspirators have no legal or moral grounds to stand on. When you’re involved in fraud, you NEED to be exposed.

coming from government funded entities, all those climate-fraud. …errrr -gate emails would be subject to FOIA anyway, right?

As I understand it, yes.

There is only one way to see this and that is that ANY correspondence between any two or more people via ANY media is potentially public and should be treated as such. There will never be a law that stops that. However, any copyrighted data or marketable products that are private and are made public, the injured party should have the right to sue for damages or punitive reasons to stop it in the future.

If a Conservative company or organization had been hacked, not a single one of these hand-wringing “news” organizatins would even be asking these questions. They wouldn’t care if it were ethical, and they wouldn’t have the slightest doubt that it was newsworthy.

They’d simply cover it, in every detail, non-stop, for months.

See, this is why I didn’t understand all the shock and horror at those nude photos that got stolen a while ago. How is this any different? Or how was Palin’s email any different? So if there was no shock or horror then, and there’s none now, then why at the photos?

I fail to see the difference between this and what Snowden did other than one is basically gossip and the other a matter of national security.

Sony would have no issues making a film using the stolen material from Snowden and Sorkin would jump at the chance to direct.

It’s only a problem when it directly affects you.

Literally the ONLY concern the media has is that it puts Obama’s own craven toady liberal big donors in a bad light.

If you have no respect for the privacy of others please don’t whine when your dirty laundry hits the line.

Everyone enjoys a good petard-hoisting.

Heilemann’s comment, that a lot of useful information was obtained that would have been considered legitimate if it had been found in another way, sounds a lot like a defense of enhanced interrogation techniques.

I have no sympathy for Sony or any other major Hollyweed studio. They did this to themselves, by foisting off the crap they call entertainment. Most of the crap is anti-American and just plain filth. They have the audacity to claim privacy, when we all know that they are the biggest spies for the government. Then there is the issue of piracy and how hypocritical they are about that. They raise holy hell about people stealing their stuff, but when it comes to other people’s stuff, they do it all the time.

The media could choose to censor itself on this front. If the stolen data were from another source involving rape, abuse or molestation victims… they would not publish.

Know that those are grandfathered values, and did arise from the current crop of media leadership, who would probably publish it if THEY were to own the decision (unless its a Democrat who would be harmed).

However today’s media have no honor beyond that … so I’m surprised at Sony’s surprise.