Why the Lone Star State has a ‘Merry Christmas Law’ 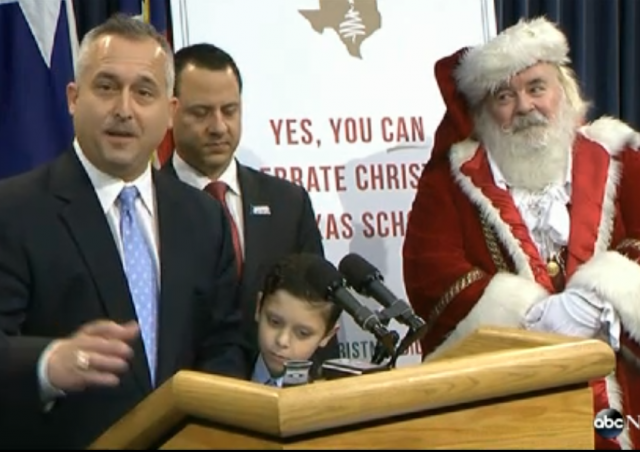 Last year, the Lone Star State passed a bill that allows schools to say things like, “Merry Christmas” and “Happy Hanukah” without retribution.

Co-authored by Dwayne Bohac (R-Houston) and Richard Raymond (D-Laredo), the bill, “allows students, parents, teachers and administrators the freedom to acknowledge these traditional winter holidays without fear of litigation or punishment and restores common sense by placing Supreme Court precedent into state law,” according to the law’s official website.

Sec. 29.920. WINTER CELEBRATIONS. (a) A school district
may educate students about the history of traditional winter
celebrations, and allow students and district staff to offer
traditional greetings regarding the celebrations, including:
(1) “Merry Christmas”;
(2) “Happy Hanukkah”; and
(3) “happy holidays.”
(b) Except as provided by Subsection (c), a school district
may display on school property scenes or symbols associated with
traditional winter celebrations, including a menorah or a Christmas
image such as a nativity scene or Christmas tree, if the display
includes a scene or symbol of:
(1) more than one religion; or
(2) one religion and at least one secular scene or
symbol.
(c) A display relating to a traditional winter celebration
may not include a message that encourages adherence to a particular
religious belief.

According to Rep. Bohac who initiated the bill:

“This bill originated when I picked up my first grade son from school last year and asked him how his day went. He told me that his class had decorated their holiday tree with holiday ornaments. When I asked what a holiday tree was, he told me it was the same as a Christmas tree. After inquiring with school officials as to why the term ‘Holiday Tree’ was being used, it became apparent that the school was fearful of litigation.”

“With Christmas around the corner, our goal is to educate the public on this state law so that our teachers and students are able to celebrate the upcoming holiday season without fear of retribution or punishment,” said Bohac.

“This law is about providing clarity,” Rep. Raymond said.

Well, my stars, LI is just brimming with good news for we the people today!

God bless the Lone Star state. That lone star may become prescient again by Texas ending up being the last bastion of sanity in this country.

“Congress shall make no law respecting an establishment of religion, or prohibiting the free exercise thereof; :

This law allows the free exercise of religion without penalty, and expressly avoids establishing one. Looks good to me.

Happy Hanukkah, and God bless us, each and every one!

” if the display
includes a scene or symbol of:
(1) more than one religion; or
(2) one religion and at least one secular scene or
symbol.”

So, a Nativity Scene can only be put up if you include a Festivus Pole?

My boss handed me an invite to our company’s “Winter Festival” a few weeks ago.

I told him that I had never celebrated anything called “Winter Festival” in my life, but if the company ever threw a Christmas Party to be sure and let me know.

It’s nice to see in Texas you can say more than “Happy Festivus, for the rest of us”.