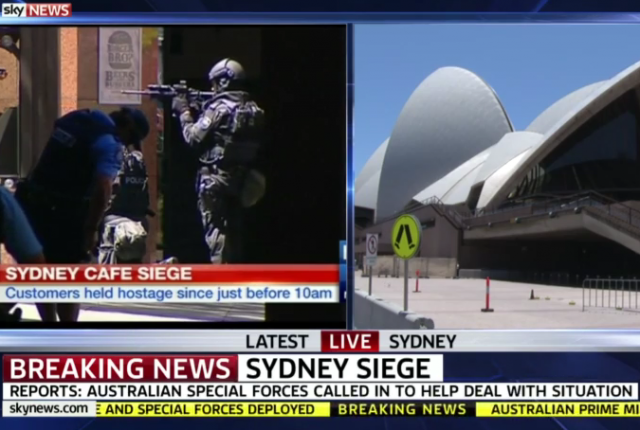 New South Wales olice officers are handling what many suspect could be a hostage situation in a downtown Sydney cafe.

About half a dozen armed officers wearing helmets and body armor were stationed on the corner of Elizabeth Street and Martin Place, about 20 meters from the Lindt cafe entrance. Pedestrians were blocked from the CBD square, which houses offices for Macquarie Group, the central bank and Westpac Banking Corp.

Channel Seven showed images of people inside the cafe with their arms up pressed against the window and holding a black flag with white lettering. New South Wales police confirmed an operation was underway in Martin Place, and declined to provide further details. Sky News said the Sydney Opera House was evacuated after a suspicious package was found.

Here is a custom Twitter feed we put together of news sources in Australia:

As of now, no injuries have been reported, and police have not given details as to what is happening inside the shop, or whether those seen through the window are indeed hostages. However, the Telegraph reports that the man claiming to be behind the incident in the cafe claims to have explosives planted all over the city, and has demanded to speak with Australian Prime Minister Tony Abbott live on the radio.

The Telegraph’s correspondent out of Pakistan has provided an explanation of what the writing on the flag says, and what the presence of the flag could signify:

“There’s a lot of discussion about the nature of the flag hanging in the coffeeshop window. It represents the Shahada, an Islamic creed which reads: “There is no god but the God, Mohammed is the messenger of God”. However, putting it on a black background some suggest it has been appropriated as an Islamist symbol.”

Abbott has rallied Australia’s National Security Committee for an emergency briefing, and is urging the public to remain calm. As I said above, police have not confirmed that this is indeed a hostage situation, and we don’t have details about who may be responsible for whatever it is that’s currently unfolding in Sydney.

Police negotiators are now in contact with the gunman, and there’s still no information suggesting that anyone has been harmed (and some have escaped):

Earlier, at least three people were seen inside the Lindt cafe with their hands up against a window, and holding up a black flag with Arabic writing.

Australian Prime Minister Tony Abbott has described the “terrifying” incident as “deeply concerning”.
…
About six hours into the siege, three people were seen running from the building housing the cafe. Two more people followed about an hour later. The circumstances of their exit are not clear.

The religion of peace strikes again.

And this is just their JV Workplace Violence team too.

I am predicting we will soon hear demands for a separate Moslem state in Austrailia – kind of like a Shariaville down under.

One bad guy with a gun (as it appear to be) takes 16 or more people hostage, confident that none of them is armed.

[sarcasm]
But … but … but …. How can this be? It’s not legal for civilians to possess guns and explosives in Australia. There must be some mistake in the reporting! Surely passing a law prohibiting civilian possession of these items would prevent Bad Guys from getting them. Wouldn’t it?
[/sarcasm]

Despite the sarcasm, I have to point out that IT IS LEGAL to own guns in Australia. Someone has been dropping misinformation regarding this particular fact!!

However, that does not mean that the man in possession of a rifle who is standing inside the Lindt chocolate Cafe, is in fact a legal registered gun owner!!

The situation is is this: You can legally purchase guns in Australia but you have to have a gun licence to legally own the gun. There are individuals within Australia who have chosen to import illegal guns… and those individuals are of a certain persuasion.

Most Australians do not own a gun because we have no desire to own one.. BUT that might change in the future.

I and many others were under the impression that Australia conducted a gun grab a few years ago, and other than a shotgun if you live in a rural area, nobody can own a concealable weapon to carry in a city.

Is this not true?

It’s pretty restrictive, all the way down to air guns. From wiki:

State laws govern the possession and use of firearms in Australia. These laws were largely aligned under the 1996 National Firearms Agreement (NFA). Anyone wishing to possess or use a firearm must have a Firearms Licence and, with some exceptions, be over the age of 18. Owners must have secure storage for their firearms.

Each firearm in Australia must be registered to the owner by serial number except firearms manufactured before 1 Jan 1901 which in some cases are exempt from a serial number or exempt from registration all together. Some states allow an owner to store or borrow another person’s registered firearm of the same category.

Firearms in Australia are grouped into Categories determined by the National Firearm Agreement with different levels of control. The categories are:

Category B: Centrefire rifles (not semi-automatic), muzzleloading firearms made after 1 January 1901. Apart from a “Genuine Reason”, a “Genuine Need” must be demonstrated, including why a Category A firearm would not be suitable.

Category H: Handguns including air pistols and deactivated handguns. Neither SA nor WA require deactivated handguns to be regarded as handguns after deactivation. This situation[when?] was the catalyst in QLD for the deactivation and diversion of thousands of handguns to the black-market[vague] – the loophole[which?] shut since 2001) This class is available to target shooters and certain security guards where your job requires possession of a firearm. To be eligible for a Category H firearm, a target shooter must serve a probationary period of 12 months the first 6 months using club handguns, then in the remainder of the last 6 month probationary license, an application may be made, permit to acquire for one air pistol OR one rimfire pistol. A minimum number of matches yearly to retain each category of handgun and be a financial member of an approved Pistol Club. [2]

Target shooters are limited to handguns of .38 or 9mm calibre or less and magazines may hold a maximum of 10 rounds. Participants in certain “approved” pistol competitions may acquire handguns up to .45″, currently Single Action Shooting and Metallic Silhouette. IPSC shooting is approved for 9mm/.38/.357 sig, handguns that meet the IPSC rules, but larger calibres are not approved for IPSC handgun shooting contests in Australia.[3] Category H barrels must be at least 100mm (3.94″) long for revolvers, and 120mm (4.72″) for semi-automatic pistols unless the pistols are clearly ISSF target pistols: magazines are restricted to 10 rounds. Handguns held as part of a collection were exempted from these limits.

Category R/E: Restricted weapons: machine guns, rocket launchers, full automatic self loading rifles, flame-throwers, anti-tank guns, Howitzers, artillery, etc. can be owned by collectors in some states provided that these weapons have been rendered permanently inoperable. They are subject to the same storage and licensing requirements as fully functioning firearms.

Certain Antique firearms (generally muzzle loading black powder flint lock firearms manufactured before 1 January 1901) can in some states be legally held without licences. In other states they are subject to the same requirements as modern firearms.

All single-shot muzzleloading firearms manufactured before 1 January 1901 are considered antique firearms. Four states require licences for antique percussion revolvers and cartridge repeating firearms, but in Queensland and Victoria a person may possess such a firearm without a licence, so long as the firearm is registered (percussion revolvers require a license in Victoria).

Australia has very tight restrictions on items which are far less controlled in comparable societies such as New Zealand. Air pistols, elsewhere unrestricted, are as difficult to get as centrefire and rimfire handguns, and low-powered airguns are as difficult as cartridge arms to license. Airsoft guns are banned in all states and non-firing replicas banned in most. Suppressors (or ‘silencers’) which are legal in the UK and New Zealand, are extremely restricted in Australia to a few government bodies.[4]

This sounds so much like what happened in Ottawa in Canada just months ago.

Lone gunman with a rifle and a radicalized Islamist.

Israeli father-and-son duo Benny Elbaz and Gad Elbaz had been in Sydney for a concert on Sunday night, and spent over an hour at the Lindt Cafe on Monday morning before leaving for a gig in Singapore. They left for the airport just minutes before the attack. You can imagine how the gunman would have acted had a pair of Israeli Jews fallen into his hands

Oops. Forgot to close that link.

They’re whitewashing Muslims like US media whitewash violence by blacks. “holding a black flag with white lettering” aka the Muslim flag of conquest, without identifying it, just like US media doesn’t identify black perps. Using the word “appropriating” in an attempt to divorce Islam from what the perps are doing, when they are clearly doing it for Islam.

I was watching the Channel 7 via the link above last night.

I noticed they had someone on who was Muslim and who claimed his religion was being hijacked. Sadly enough, that fits with the pattern I have seen described elsewhere on Youtube about the three stages of an Islamic takeover.

Sad how the media and governments are complicit in this deception.

This wouldn’t be happening if Australia didn’t have all of those military bases all over the world.
///

I’m waiting for Islam expert, Ben Affleck to offer to negotiate the hostage release by telling that ISIS gunmen that ISIS “…is not Islamic”.

ISIS, Al Qaeda, etc., all of them want to drive a wedge between the Great Satan and our allies. Australia is among our closest allies.

I heard an interview with a retired intel guy who said they have multiple plans for one, two, three, four, etc. man terrorist teams to attempt in western countries: hostage seizure, sniper(s), bombers, of course, infrastructure sabotage, whatever seems available to the jihadist(s) in place in Sydney, Paris, London, Toronto, Vancouver, NYC, LA, etc., wherever.

‘Hiolidays’ are the days before and after holidays. My kingdom for an edit function.

Some Aussie celebs are now falling over themselves to announce their solidarity with “peaceful” Muslims, and other people are chiming in that it shows how much more tolerant and civilized the Aussies are than those hateful, bigoted Americans.

As a rule, I think Aussies are great people, and I hope, for their own sake, that they see the danger of believing it’s only a few extremist nutcases who are the problem. It isn’t a few extremist terrorists who have turned hundreds of neighborhoods in France and many more in other European countries into dangerous places, or who have made it essentially forbidden to speak the truth about Islam in most European countries, or to have a ham sandwich for lunch at school.