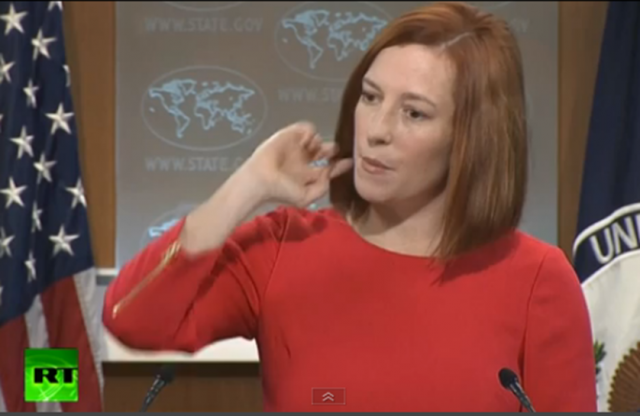 Ridiculous may indeed be an apt description of the Obama administration’s foreign policy platform.

However, that probably was not US State Department spokesperson Jen Psaki wanted to convey when she commented on Egypt’s former president’s being cleared of murder charges that we covered earlier this week.

State Department spokesperson and perennial question dodger Jen Psaki was caught admitting that her prepared ‘line’ on Egypt was “ridiculous” after a press briefing Monday.

Lee was astonished at the response, and took the opportunity to point out that the answer was meaningless.

“Wow, I don’t understand that at all,” Lee said. “What you said says nothing. It’s like saying, ‘We support the right of people to breathe.’”

Psaki declined to give any further comment to reporters during the briefing. However, as the lights dimmed, Psaki was exasperated and told Lee how she really felt, not realizing her microphone was still on.

Actually, the word ridiculous springs to mind when discussing much of the Obama foreign policy approach of “empathizing with the enemies”, obviously a hold-over from Hillary Clinton’s time as Secretary of State.

And while protests in Cairo and this country continue, news comes that an American held for passing “nuclear details” to Egypt.

A U.S. Navy civilian engineer was arrested Friday on charges of trying to steal schematics of a new nuclear aircraft carrier and have them sent to Egypt, the Justice Department said.

An undercover FBI agent posed as an Egyptian intelligence officer to snare Mostafa Ahmed Awwad, 35, from the state of Virginia, who is charged with two counts of attempting to export defense articles and technical data.

He faces a statutory maximum sentence of 20 years in prison on each count if convicted.

Awwad told the undercover agent — whom he believed was an Egyptian government official — that it was his intention to utilize his position of trust with the U.S. Navy to obtain military technology for use by the Egyptian government, the Justice Department said.

Star and Stripes offers more background on Awward and his plans:

Court documents describe a saga that included an FBI undercover agent posing as an Egyptian intelligence officer, a clandestine meeting in Sandy Bottom Nature Park in Hampton, a prearranged “dead drop” along a secluded hiking trail and Awwad’s alleged intention to wear a pinhole camera to photograph classified material.

During one meeting with the undercover agent, he “discussed where to strike the vessel with a missile in order to sink it,” an affidavit states.

Awwad worked in the nuclear engineering and planning department at Norfolk Naval Shipyard, having begun working at the yard early this year, the affidavit says. His security clearance gave him access to information on Naval nuclear propulsion systems.

You know what is ridiculous? Policies that encourage those who want to sink our ships to be employed in our shipyards.

Do you think islam might have played a part in his desire to steal the plans? I hope he spends Mostafa the rest of his life in jail. Johnathan Pollard would be the precedent. Or will Imam Barry go easy on him ’cause he’s pissed at Netanyahu.

Islam isn’t even a necessary component. Personal greed and nationalism are plenty. Islam might be part of it, and it might not. My sympathy gauge is set at zero either way.

But he is a Saudi-born, selling secrets to Egypt. There is nothing nationalistic about it, the two countries are often at odds. The one common thread between these two American allies is Islam.

Someone named Mostafa Ahmed Awwad should have gotten as much scrutiny as a grandma in a TSA line at Christmastime.

It should, but then the usual suspects will cry :

To which we reply:

“Yes! And for good reasons!”

My differential equations class was taught by a TA that I swore was speaking Chinese. I had to drop the class (decades ago).

We’ve educated our enemies, to the detriment of American students that must compete with them. Then the Clintons (are alleged to have) sold our technology to China, and allowed their people access to our delicate defense industry secrets.

The whole “diversity” religion is crap, along with the fears of xenophobia. We have to “STEM” the tide by teaching real science, and real civics, so American kids grow up understanding how we became a superpower for good.

With Obama dismantling our military and our alliances around the world, we don’t have time to waste.

Any member of Goebbels’ propaganda ministry caught dissing the National Socialist line was given a bread bag and Panzerfaust and sent to the Eastern Front.

Maybe we’ll see her in Syria later this year.

No one is disciplined in the Obama Administration, except for those who expose corruption or overtly dissent. Now, if she had said, “Kerry/Obama policy is ridiculous,” she’d be on her way to the new posting.

But Psakis has earned her bones as a loyalist. Remember, when the Egyptian unrest and military coup was on, she repeatedly insisted Kerry was on the job and NOT yachting, even as tourists were posting pictures of Kerry in short pants and sailing hat, boarding his yacht at Martha’s Vineyard and sipping cocktails with guests on deck.

Who are you gonna believe, me or your lyin’ eyes?

That level of lying is hard to train. She’s staying.

Security clearance should have been in quotes, “Security Clearance”